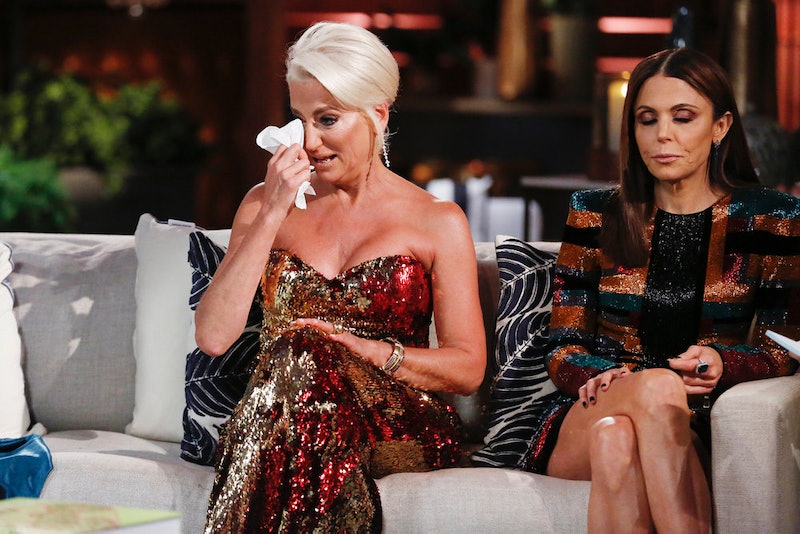 Being on a television show together can create some really great friendships. It's not easy being in the public eye, and if you're already buddies, like Dorinda Medley and Luann de Lesseps were when they first started out, that bond can get even stronger. Who else knows what it's like to have film crews following you around and be constantly scrutinized? Unfortunately, Dorinda and Luann took some hits this year on Real Housewives Of New York — between Jovani and everything else, their decades-long friendship seemed to have run its course. Have Dorinda and Luann made up on Real Housewives Of New York? Season 11 may have set them straight.

Most of the ire between Luann and Dorinda stemmed from one simple phrase — "Jovani! Jovani!" Dorinda heckled Luann during one of her cabaret shows (Dorinda said it was not heckling, but it definitely was), and Luann took offense. But, going back even further, the sparring match between Dorinda and Luann in Colombia was the real breaking point of their friendship — they both accused each other of being drunks, and it was a really sad thing to see, considering that both women have been friends for a really long time. Just say you're sorry, ladies! It's not worth it to fight like this.

Fortunately, Dorinda and Luann seemed to have buried the hatchet. Back in March 2019, Dorinda told Us Weekly that Barbara Kavovit was responsible for the delay in mending the Dorinda/Luann friendship, but all was well now. “I think it made it go on longer than it should have. We needed to just clear the air. I mean, listen, you know when you have a break like that, it changes the relationship," Dorinda said. "So we’re working on it, but yeah, we’re in a good place [now].”

On Watch What Happen Live in July 2019, Luann told Andy Cohen that everything was cool. "I know that she loves me and I love her. We have a very old friendship and we love each other and we just had to get through it," she said of her fight with Dorinda. To top all of this off, Dorinda and Luann even hugged it out during the Real Housewives Of New York Season 11 reunion, to the point where Andy Cohen just gave up even asking about their fight and went along with it, too. It's over, RHONY fans! The band is back together!

It's a good thing, too, because Dorinda and Luann (and Bethenny and Ramona and Sonja and eh, maybe Tinsley) need each other. These women have been on television for so long together that they are actual friends. When Bethenny had an almost-deadly allergic reaction in December 2019, the other women were obviously rattled at the fact that they almost lost their friend.

The women had an intervention for Luann when it was clear that she wasn't getting the help she needed. They may fight like mean cats on television, but the women of Real Housewives Of New York are always there for each other when it counts, and hopefully, Luann and Dorinda will keep their relationship going much longer than the show will air.