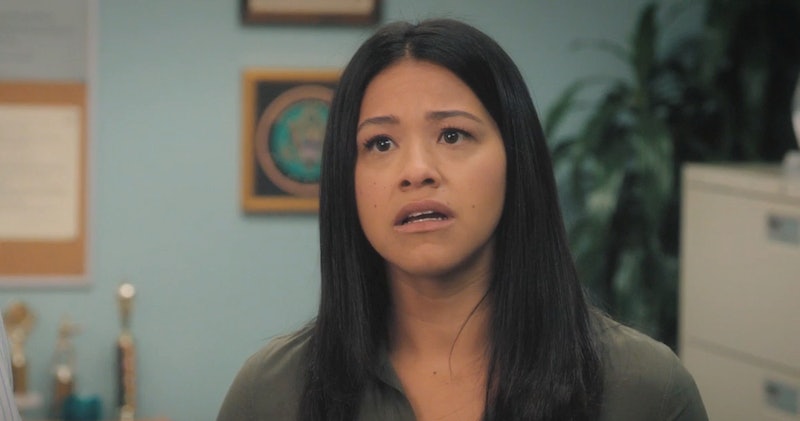 The criminal mastermind Sin Rostro hasn't been on the loose since Season 3 of Jane the Virgin. However, just in time for the series finale, Rose has escaped from prison. A run-in between her and Jane feels inevitable, but have Rose and Jane met on Jane the Virgin? Since Jane is the main protagonist and Rose is the main antagonist, the telenovela-inspired show requires that there be tension between them. While Rose has mostly antagonized Jane from afar, these women have interacted before — and they may come face-to-face again before the series is over.

Back in Season 1 of Jane the Virgin, Emilio Solano owned the Marbella and he was married to Rose. So, considering that Jane worked as a server at the Marbella, it would make sense that Rose and Jane's paths would have crossed at some point. But the first time they met didn't actually happen until after Emilio's daughter and Rose's lover Luisa artificially inseminated Jane with Rafael's sperm. Emilio, Rose, and Luisa were already at one of the most awkward lunches ever in "Chapter 3" when Jane appeared as their server and made it all the more awkward.

Luisa admitted to her dining partners that Jane was the woman she had accidentally impregnated with her brother's sperm. As Jane was rightfully still pretty upset about becoming a pregnant virgin and was planning to sue Luisa, she didn't end up being their server. But this brief interaction at Marbella's Table 8 marked the first time that Jane and Rose officially met.

While it wasn't shown onscreen until Season 2 via a flashback, Jane and Rose had another moment at the Marbella restaurant before Michael figured out Rose's Sin Rostro identity. Rose came to Jane's rescue when a snobby patron didn't like his bottle of Swiss wine. Jane thanked Rose for correcting the guest but got a bit distracted when she spotted Michael in the restaurant.

Jane had recently broken up with him and was dating Rafael, so Jane and Michael weren't on the greatest of terms. Rose saw the tension between the woman carrying her stepson's baby and the police detective who was so hellbent on capturing Sin Rostro. So she pressed Jane for details about their complicated relationship. Rose eventually used that information to her advantage by kidnapping Mateo, knowing that Michael would do as she wanted to save Jane's baby.

These are the only two occasions that Jane was shown to have interacted with Rose. But there are other incidences when they probably spoke, including when Rose was rocking a different face. Rose in her Susanna mask was at Jane's wedding to Michael — where Jane generously allowed Susanna to bring Luisa as her date — since she had been Michael's police partner. Then, there was Rose as Eileen. Jane and Michael didn't formally meet Luisa's next girlfriend like they had planned to since Rose faked Michael's death and gave him amnesia. But it's likely that Jane spoke to Eileen sometime over the course of the next three years before she was discovered as Rose in disguise in "Chapter 63."

Rose has been so entangled in the lives of Jane's two great loves that it's slightly surprising that the two women haven't spoken more. But as she has proven time and time again, Rose doesn't always have to be physically present to tamper with Jane's happiness. Simply the thought of Sin Rostro can threaten Jane, like when she kept imagining Rose everywhere after she stole Mateo. Perhaps this was foreshadowing Rose's double plan to escape prison that she used in Season 5, but this Season 2 scene also shows how long Jane has worried that Sin Rostro may target her family again.

With only two episodes left, Jane might finally get to confront Rose like she had wanted to in "Chapter 97." The only problem is that Rose is no longer in prison, so any encounter will be on Sin Rostro's terms and not Jane's. But after everything that Rose has put her family through, Jane has absolutely earned the right to have one final face-off with the faceless woman who killed her fiancé's adoptive father, kidnapped her child, and stole Michael from her. And since good typically triumphs over evil on Jane the Virgin, our heroine may be responsible for taking down this elusive crime boss and creating her own happy ending.