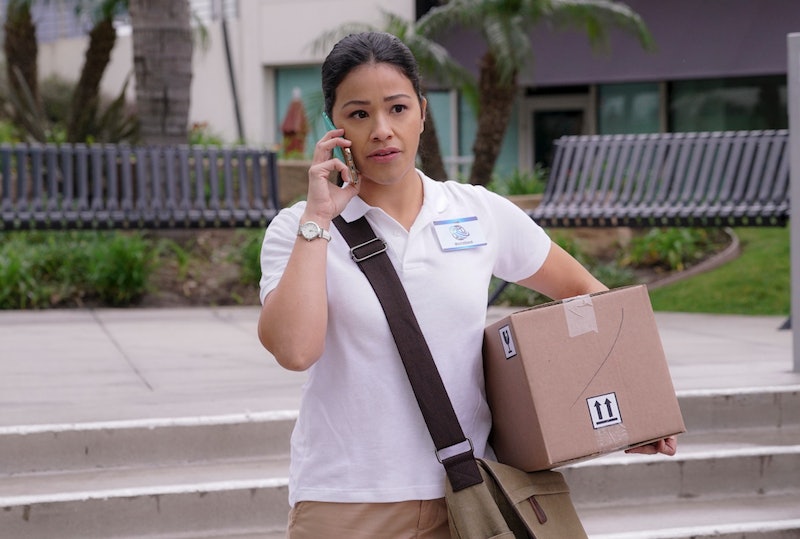 Spoilers ahead for Jane the Virgin Season 5, Episode 15. Sin Rostro has always been the master of disguises, but she takes her face-swapping treachery to another level in "Chapter 96." The evil mastermind has created Rose doubles on Jane the Virgin with the help of her henchperson Bobby. These women — all now rocking actress Bridget Regan's face and red hair — were Rose's six "angels" that she assembled via video chat in the Season 5 premiere. The narrator doesn't reveal what Rose plans to have these doppelgängers do, but Sin Rostro is clearly going to try to terrorize Rafael and Jane's family in a big way one last time.

Rose has rocked a number of faces herself throughout Jane the Virgin, like Michael's partner Susanna (Megan Ketch) in Season 2 and Luisa's girlfriend Eileen (Elisabeth Röhm) in Season 3. Rose also has had a person wear her own face in Season 2 to fake her own death while she was busy impersonating Susanna. Since Rose has been keeping up with her criminal activity even from jail, it fits her M.O. that she'd go back to her tried and true process of using plastic surgery to change faces. But why on earth would she want six more people wearing her face when she's a convicted criminal?

Well, for one, Rose could use these look-a-likes to help her escape prison. Bobby and Luisa get a hold of Emilio Solano's stash of cash in "Chapter 96." So perhaps Rose simply wants to run away with Luisa since a flashback in "Chapter 65" showed that Rose had said, "By the way, if I ever get caught, I need you to deposit a hundred million dollars into my account here in the Caymans. That will initiate my escape protocol." That would explain why Luisa has been helping deceive her brother (beyond the fact that Rafael pushed her away ... again.) But if you're holding out hope that Luisa is just going along with Bobby and Rose's plan to save the day in the end and prove herself to Raf, then Rose probably has something more diabolical planned with these doubles. After all, she did create six of them and probably only one or two would be needed to escape prison.

Instead, Rose may be focused on directly targeting the main men in Jane's life — Rafael and Michael. Let's start with Raf first though. Rose has always been all tangled up in Rafael's business. She was the stepdaughter of Elena Di Nola, the woman Rafael believed to be his mother. Elena had recruited her stepdaughter Rose to marry her ex-husband Emilio, the man Rafael believed to be his father. One of the major mysteries still not solved on Jane the Virgin is who Rafael's biological parents are. So with Rose claiming she knows their identities and her continuously meddling in Rafael's family affairs, her doubles could somehow lead to the reveal of who his parents are.

Then, there's Michael. Although Jane said goodbye to her first husband, Brett Dier is set to come back for one more Jane episode. Michael has been after Sin Rostro since day one and he has a number of personal vendettas against her since Rose shot him after pretending to be his partner for months. And then, you know, that whole thing where she faked his death and gave him amnesia and completely upended his entire life.

Even after living years as "Jason," Michael discovered Sin Rostro's illegal marketplace Satin Road this season. And while Rose said, "Michael is irrelevant now" to Bobby in "Chapter 87," her actions are definitely not irrelevant to Michael. Since it seems that the doppelgängers will be used in some way to service the Satin Road or continue Rose's criminal activities, maybe Rose's plan will help Michael and his old partner Dennis to expose Sin Rostro and put an end to her villainous ways once and for all.

Whatever Rose has got up the sleeve of her orange jumpsuit, there are now seven people rocking her face within the Miami area. So Sin Rostro will cause chaos and confusion in a Multiplicity-like way for the final episodes of Jane the Virgin. But her doing one big final act of evil opens the doors of possibilities for a major reveal and a drama-filled telenovela series end, which is thrilling — as long as her doubles don't end up crashing Jane and Rafael's wedding.