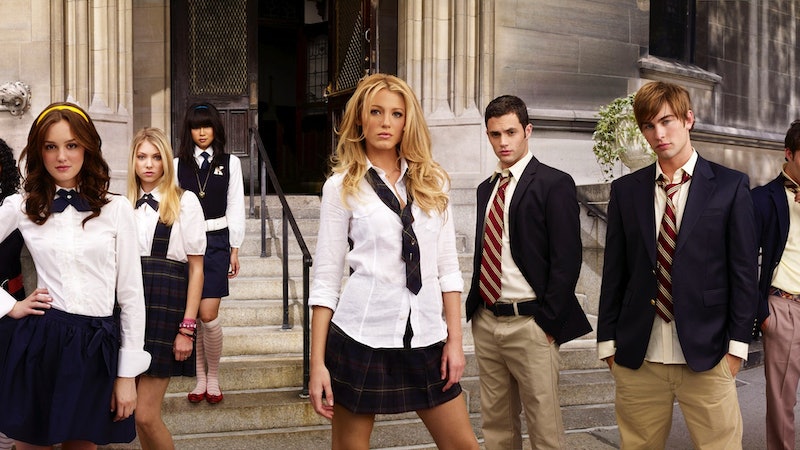 Bad news, Upper East Siders: You'll have to wait a little longer for all of the hottest gossip. In a recent interview with Vulture, HBO Max's chief content officer Kevin Reilly revealed that the Gossip Girl reboot has been postponed until 2021 because of the ongoing coronavirus pandemic. Production on the series was suspended back in March, when many shows and movies stopped filming in order to prevent the spread of the novel coronavirus.

"They hadn’t even started production yet; they were in pre-production and ready to roll," Reilly said of the anticipated series. While he didn't reveal exactly when the Gossip Girl reboot will premiere on HBO's upcoming streaming service, the series was expected to arrive in the fall. According to Vulture, if filming starts up again in mid-to-late summer, the first season will likely be ready to stream sometime in 2021.

News of a Gossip Girl reboot first emerged in July 2019, with the Joshua Safran — who served as showrunner in the original series' later seasons — on board as the main writer and executive producer. (Gossip Girl's creators, Josh Schwartz and Stephanie Savage, will also produce the reboot.) The new series will pick up eight years after the original Gossip Girl has abandoned their namesake website, and will follow a brand new set of teens at a New York private school, as they discover that they're being surveilled by a brand new Gossip Girl.

"It's not a remake. It’s a continuation of that world," Schwartz said of the reboot in a July 2019 interview with Deadline. "We felt like a version that was just our cast grown up — regardless of what the challenges would be of assembling those actors again — it didn’t really feel like a group of adults who were being controlled by Gossip Girl would make a lot of sense." In addition, the new episodes will explore how social media affects the characters' lives and relationships, and how the elusive Gossip Girl has been able to use those platforms to their advantage.

This "modernized" Gossip Girl will also feature a much more diverse cast than the original series; in March 2020, Deadline reported that Chilling Adventures of Sabrina star Whitney Peak had been cast in the series, alongside Eli Brown, Jonathan Fernandez and Jason Gotay. The quartet will join Emily Alyn Lind, who will star as Audrey, a teenager who is becoming bored of her long-term relationship and starting to wonder about her other options.

Along with the new cast, Kristen Bell, who voiced the titular Gossip Girl on the CW series, will reprise her role for the reboot. Thus far, no other actors from the original series have signed on to appear in the new episodes, though quite a few of them have expressed interest in reprising their iconic roles. "I would absolutely cameo [on the HBO Maz reboot]. I'd have to!," Chace Crawford, who played Nate Archibald, told Digital Spy in July.

A month later, Crawford pitched a potential character for himself during an appearance on Watch What Happens Live! "I could maybe come back and play a father or something," he told host Andy Cohen. Regardless of whether or not Crawford does appear on the Gossip Girl reboot, it's clear that the show will bring just as much drama, scandal and memes as the original did when it finally arrives on HBO Max.