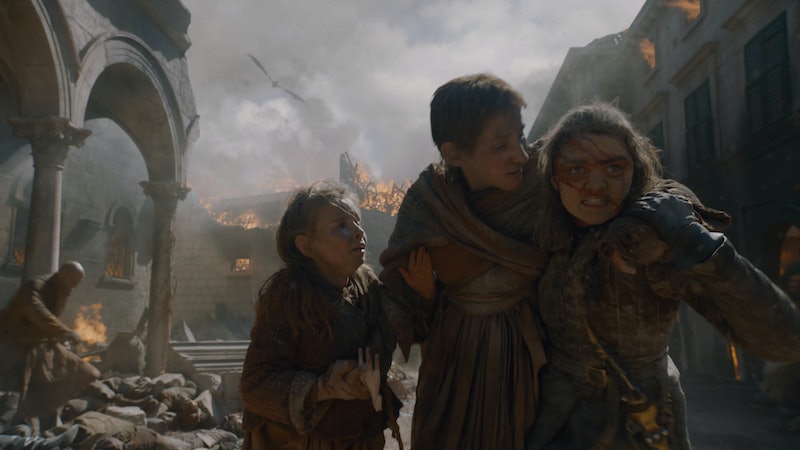 Game of Thrones' final season has become a must watch show for many reasons, but mostly because of the characters that have become, for good or bad, like family to fans who are desperate to see how their stories end. And with the second big battle of the season happening on the May 12 episode, "The Bells," a lot of those stories came to an untimely end. So, to help fans grieve and keep track of who's still in the running to sit on the Iron Throne, here's everyone who died in Game of Thrones episode 5. Spoilers for Game of Thrones episode 5, Season 8, "The Bells," ahead.

Despite the Battle of Winterfell being the biggest fight sequence in TV history, it didn't see a lot of main characters die. Yes Jorah, Theon, Lyanna Mormont, and the Night King died in that fateful battle, but, as far as Game of Thrones goes, that's not the worst death toll fans have seen. Of course, it was still heartbreaking, but the Battle of King's Landing saw way more destruction and carnage. Many had predicted the outcome where Cersei and/or Jaime died, or that Daenerys would fulfill her inherited path of becoming the Mad Queen. Neither hit in a satisfying way, but they did happen nonetheless, which is great if you had a deadpool going. But of course there was more lives lost in episode 5, so here's a rundown of those that were lost in last night's episode.

As soon as Varys started to stray from Daenerys' side, his days were numbered. Varys had warned her that he served the realm and would tell her when she wasn't serving the people as leader. But Daenerys also told him that if he betrayed her, she'd burn him alive. Both kept their promises, and Varys died having been right about what the Khaleesi would do. However he was also writing letters about Jon's true parentage before Drogon burned him a crisp. He burned the last one before Grey Worm took him to his execution, but his first letter appears to have been sent.

Who could Varys have sent it to? As you'll see from the list, Cersei was the last formidable threat to Dany, and she's gone. But all Varys has to do is get it to someone who will spread the news far and wide, in favor of Jon, to undermine Daenerys (although the people are already not on her side thanks to her destruction of King's Landing). It's possible he sent the note to Tormmund, or others at the Wall, since they're already loyal to Jon Snow. Or he could be warning Sansa. Hopefully, fans will get answers in the finale.

In a pretty lackluster battle with Jaime Lannister, Euron taunted his way to a death. Jaime was just trying to get to Cersei, but Euron had to challenge him to a duel. The fight wasn't epic by any means, and, while both ended up with major injuries, Jaime delivered the ultimate kill with a sword to Euron's chest. And the Iron Born took his last solace in the false claim that he was the one to kill Jaime Lannister (more on that later).

There were guesses that Arya could have killed and then taken the face of Qyburn, Cersei's hand, in order to kill her. But, instead, he suffered a much simpler fate when The Mountain catapulted him against debris, shattering his skull. It was unexpected, but definitely one of the most satisfying deaths of the episode.

The Hound and The Mountain

In the fan-predicted battle — Clegaenbowl — Sandor Clegane (The Hound) finally faced off against his big, evil brother, Ser Gregor Clegane (The Mountain). The Hound has never been a nice man, but there have been glimpses at empathy and heart under that burned face for some time, whereas The Mountain has always been a vile brute. Giving fans everything they want can be tricky, but this was the most satisfying fight in the whole episode, and gave The Hound a finale that really let his character rest.

In probably one of the most lackluster deaths of the series, Cersei Lannister finally perished. But it wasn't by Arya's hand, or even one her brothers as predicted by prophecy, but instead by falling walls thanks to Daenerys' destruction. Jaime also took several steps back from the man he was becoming from the end of Season 7 and died with her in his arms. He was completely disillusioned by her quest to stay queen, and was able to act on his feelings for Brienne. Yet in the end, he decided to backtrack and try to save his sister/lover one last time. In the end, it seems, really only the Lannister twins could understand each other, and that includes their decision to die together in the rubble of King's Landing.

Of course, these were just the major deaths of the episode. The Battle of King's Landing in "The Bells" also resulted in the death of hundreds of innocent citizens of King's Landing, as well as the entire Golden Company and hundreds of soldiers fighting for Cersei. In the end, King's Landing was decimated, leaving the people that survived traumatized, and Daenerys sitting on the Iron Throne. That said, the high death toll almost guaranteed her impending doom.

The episode ended with multiple hints that it's going to be Arya that kills Daenerys. So be on the lookout for Grey Worm to kill the Mother of Dragons, only to take off his face and reveal Arya Stark underneath. This is Game Of Thrones, and the bloodshed won't be over until the final credits roll..

More like this
Alicent's Green Dress In 'House Of The Dragon' May Be An Act Of War
By Kadin Burnett
Nicola Coughlan Shared A Lady Whistledown Excerpt From ‘Bridgerton’ Season 3
By Grace Wehniainen, Alyssa Lapid and Sam Ramsden
An 'Everything Everywhere All At Once' Star Just Joined The 'Loki' Season 2 Cast
By Grace Wehniainen
'House of The Dragon' Episode 6 Will Take Place A Decade After Episode 5
By Kadin Burnett
Get Even More From Bustle — Sign Up For The Newsletter