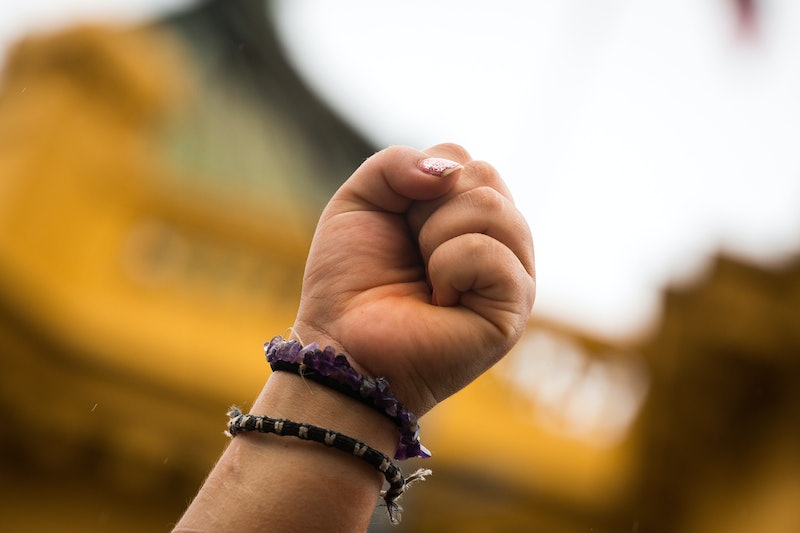 Less than a month into his presidency, Donald Trump has faced extreme criticism, backlash, and protests. He'd been in office for just 24 hours when millions of women marched all over the world to protest him, and his controversial immigration ban brought thousands more to the streets at the end of January. According to Congressional staffers, calls from constituents may have caused the phone lines on Capitol Hill to break — and it's only been three weeks. You need only glance at the news to see proof that resistance against Trump is working, and it's making waves in Washington, across the country, and all over the world.

The resistance to the then-impossible reality of a Trump presidency began shortly after the election, and saw lobby electors voting their conscience and Green Party presidential candidate Jill Stein pushing for a recount. Once it was clear, however, that Trump would in fact be inaugurated as the 45th American president, people hunkered down and got to work. The first evidence of this urgent organizing drive came in the lead-up to the women's marches on Jan. 21, but nobody could have predicted the huge turnout around the United States and around the world, with millions of people gathering to march in favor of women's rights and to protest Trump's fledgling presidency.

The proof, as they say, is in the pudding — the incredible turnout of the women's marches inarguably outshone the turnout at Trump's inauguration, though the exact attendance numbers are impossible to know. And this not only seemed to infuriate Trump, but also appeared to embolden Congressional Democrats who oppose Trump as well. Unfortunately, the GOP responded in kind with more attacks on abortion rights in Trump's first week in office than there were days in that week.

Then, of course, Trump signed his now-infamous executive order banning immigration from seven Muslim-majority countries for 90 days and indefinitely suspending refugee entrances from Syria. If the swift organizing that resulted in the women's marches was surprising, then the incredible "emergency rallies" held at airports around the country in response to the ban were downright stunning. Lawyers, many of whom were women, donated their time and legal expertise to help people detained at airports, and perhaps even more surprisingly, multiple federal judges issued stays on the ban on the basis of its allegedly unconstitutional nature. Once again, the country proved that it is ready to resist Trumpism at every turn.

Spearheaded by the American Civil Liberties Union, the legal challenges to the immigration ban didn't end with stays on the ban — there was an initial wave of lawsuits, then a nationwide restraining order, and multiple other judicial actions against the ban that culminated in a Trump-derided judge refusing to grant the administration's request to postpone his court's hearing. These actions not only illustrate the important role the judiciary takes in our nation's checks and balances system, but also show that federal judges are willing to flex their might in defiance of the new president.

In the short time since the mounting judiciary challenges to Trump's immigration ban, a number of wins (and losses) for the resistance have taken place — mounting public pressure failed to block the confirmations of Betsy DeVos and Jeff Sessions to their respective nominations, but the intensified media scrutiny of former national security adviser Michael Flynn and labor secretary pick Andrew Puzder — who respecitively resigned and withdrew — shows that the public is truly watching every move of the Trump White House.

The president has lashed out at both the media and the public who act in defiance of him — even before the inauguration, Trump's characteristic stream of tweets about protests against him seemed to hint that the nationwide rallies were getting to him. It's only gotten better (or worse) since then, when multiple pundits noticed that Trump once again seemed affected by the rage of his constituents. If Trump cares about what people think, then these nationwide protests can't be making him too happy — and that is a win in itself.

With so many examples of an uproarious public resisting in unison, it'd be easy to rest on our laurels and sit the next one out. But that's exactly what Trump and his allies want — for everyone taking to the streets, calling their Congresspeople, and penning op-ed after op-ed to get tired and give up. And this resistance is nothing if not spiteful of a president that many of us view as dangerous or illegitimate.

Even for hardened political operatives and world-weary leftists like myself, this amazing and multifaceted resistance movement is not just cause for celebration, but for awe as well. There are more people involved in activism now than I ever, ever thought I'd see, and me and my seasoned activist ilk wish for nothing more than to help our fellow protesters see this through to the very end. The resistance hasn't yet had time to decide what ends it will accept and what concessions it will work to seize in the meantime, but for now, you should all take a moment to congratulate yourselves, rest when you're able, and get back to the streets, on the phones, on your keyboards, and in the resistance.