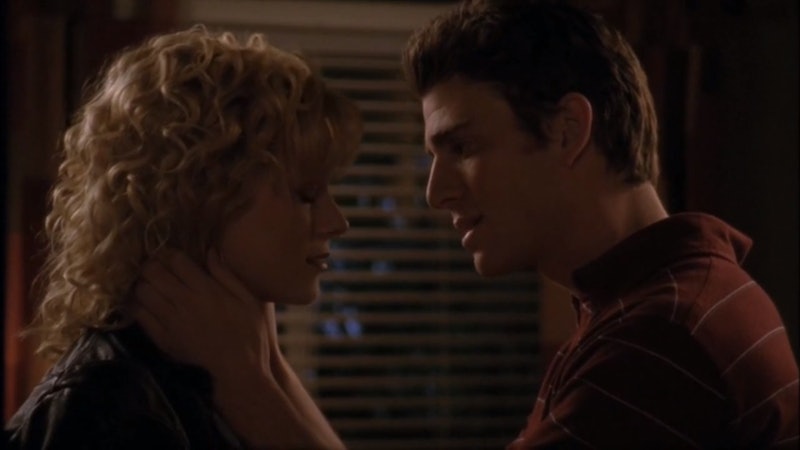 Sorry Lucas fans, but it sounds like Hilarie Burton ships an underrated One Tree Hill couple involving Peyton. Just in time for Throwback Thursday, Bryan Greenberg tweeted a photo of his One Tree Hill character Jake behind bars, and Burton quickly responded with words Jeyton fans have been waiting years to hear. The actor tweeted back, "Jake!!! I'm still upset he never came back for Peyton." Same, Burton, same.

The love triangle that was Peyton, Lucas, and Brooke tends to dominate the One Tree Hill shipping conversation. But for the first three seasons, there was another romantic option for Peyton, and it may have been the better one. Single teen dad Jake Jagielski was the very definition of dreamy. He was responsible, caring, and attentive. He always respected Peyton and told her how much he believed in her. And on top of all that, he could sing.

Peyton and Jake's romance was sweet, but because Jake was a single dad, things had to be a bit more serious than your average teen love affair. Jake's devotion to his daughter, Jenny, always came first, and his struggle to maintain custody of her is what ultimately leads to him relocating to Savannah, Georgia permanently in Season 3.

Even after his relocation, Peyton still visited him and she even proposed — but he knew her heart still belonged to Lucas. Ever the romantic, Jake promised he would be waiting for Peyton if she ever returned, but as fans know, she didn't and the Jeyton of it all ended on a bittersweet note. Burton's tweet is a reminder of everything that was so perfect about the couple in the first place though, and it's bound to make Jake and Peyton fans melancholy all over again.

One Tree Hill had flashier couples, for sure. But Burton is spot on about Jake and Peyton. It would have been so rewarding to see him return to town and reunite with his high school sweetheart. Together with Jenny, they formed an adorable family unit — and they even talked about having more kids one day.

If Peyton had ended up with Jake, it would have meant also becoming a stepmom at a young age. But she always accepted Jenny, and understood how much her dad loved her. These two just got each other, and to see Burton acknowledging how sweet the pairing is so many years later is so rewarding.

As Greenberg pointed out to his former costar, Jake did indeed return to Peyton once in Season 2. The Mindy Project actor wrote, "He did that one time in the rain from out of nowhere." Burton then gave a prediction about Jake's future that sounds so accurate it hurts. She tweeted,

"Hahaha! He did! And it stopped me from doing drugs!

Maybe, somewhere in an alternate universe, hot PTA dad Jake and Peyton end up together. If not, fans of Jeyton can at least rest easy knowing that their beloved pairing has two major fans in Greenerg and Burton.