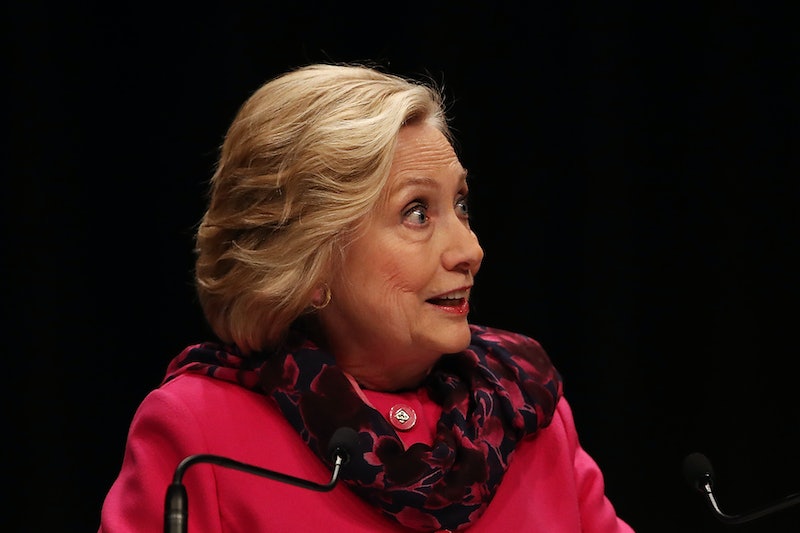 Hillary Clinton had harsh words for President Trump following reports that his administration separated nearly 2,000 immigrant children from their parents in just six weeks. She not only shot down the White House's claim that it's simply following the law by breaking up families, but Clinton told Trump his immigration policy is based on lies. Although Trump isn't likely to listen to his former presidential election opponent, Clinton bashed the current administration's justifications for separating children from their parents and called on voters to take action.

"This is not happening because of the quote 'Democrats' law,' as the White House has claimed. Separating families is not mandated by law at all. That is an outright lie," Clinton said at a Monday press conference. "And it's incumbent on all of us — journalists and citizens alike — to call it just that."

Clinton further asserted that the administration backing up its "zero tolerance" immigration plan with Bible verses goes against everything her religion stands for. "Those who selectively use the Bible to justify this cruelty are ignoring a central tenet of Christianity … Jesus said, 'Suffer the little children unto me.' He did not say, 'Let the children suffer,'" she said.

She was referring to Attorney General Jeff Sessions quoting the Bible in defense of the Trump administration's recent move to separate families during a speech on Thursday.

“I would cite you to the Apostle Paul and his clear and wise command in Romans 13, to obey the laws of the government because God has ordained them for the purpose of order,” Sessions said. “Orderly and lawful processes are good in themselves and protect the weak and lawful.”

Clinton was far from alone in calling out the White House's use of religion to justify the new immigration policy, as many Christian leaders disagreed with Sessions' interpretation of Romans 13.

"The Bible does not justify discrimination masked as racism, sexism, economic inequality, oppression or the abuse of children," the Council of Bishops of the African Methodist Episcopal Church said in a statement. "Jesus, who was an immigrant who had to leave the place of his birth and immigrate to Egypt because of an oppressive leader and system, admonishes all that the poor, children, the elderly, widows, and widowers should have a special place of justice and compassion in every nation."

"I live in a border state. I appreciate the need to enforce and protect our international boundaries, but this zero-tolerance policy is cruel. It is immoral. And it breaks my heart," Bush wrote in a Washington Post op-ed published over the weekend. "Our government should not be in the business of warehousing children in converted box stores or making plans to place them in tent cities in the desert outside of El Paso."

The Department of Homeland Security confirmed Friday that 1,995 children were separated from their parents between April 18 and May 31 and are currently being held in government shelters while their parents are criminally prosecuted for illegally crossing the border. Clinton called the situation at the U.S.-Mexico border a "moral and humanitarian crisis" after tweeting earlier this month that she was "horrified and heartbroken by what is happening to immigrant kids and families because of this administration’s disastrous policies."

Ultimately, Clinton asserted that separating children from their parents is cruel. "Every human being with a sense of compassion and decency should be outraged," she said.