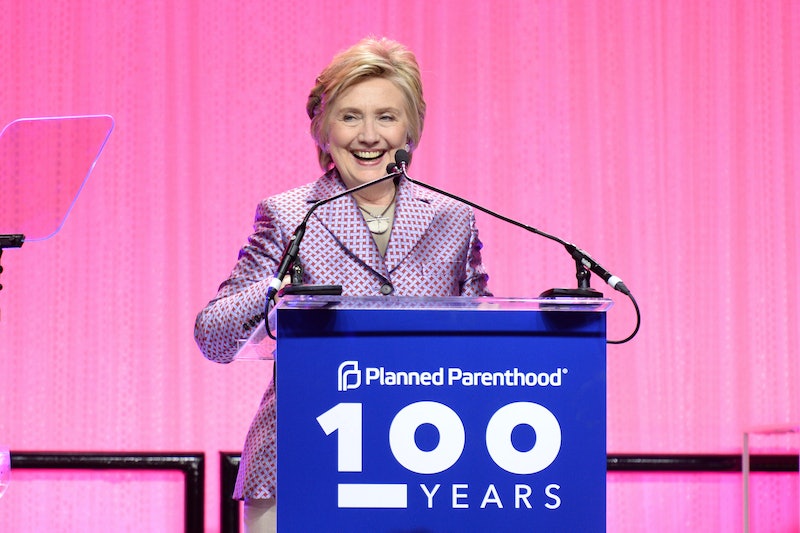 Since the 2016 general election, The Handmaid's Tale has remained at the forefront of the conversations around the country. Hulu's television series adaptation could not have been more timely, but people aren't just vegging out on their laptops to engage with the Atwood novel. Both Hulu and a San Francisco bookstore benefactor have given away copies of The Handmaid's Tale this year, and the book went to No. 1 on Amazon's bestseller list back in February.

Clinton told gala attendees that both the novel and television series contained a warning for activists:

Just ask those who have been watching The Handmaid's Tale, a book I read and was captivated by years ago. I'm not suggesting this dystopian future is around the corner, but the show has prompted important conversations about women's rights and autonomy. In The Handmaid's Tale, women's rights are gradually, slowly stripped away. As one character says, "We didn't look up from our phones until it was too late." It's not too late for us, but we have to encourage the millions of women and men who support Planned Parenthood's mission to keep fighting.

On Wednesday, Hulu's head of content announced that The Handmaid's Tale had been renewed for a second season.

More like this
We’ve All Had Bad Sex. Nona Willis Aronowitz Is Talking About It.
By Sophia Benoit
'The Sandman’s Ending Is A Departure From Neil Gaiman’s Comic Book Series
By Kadin Burnett
'The Capture' Is Finally Back – & S2 Looks Tense AF
By Sophie McEvoy and El Hunt
New ITV Drama Maternal Is Lifting The Lid On Life As A Woman In The NHS
By Catharina Cheung
Get Even More From Bustle — Sign Up For The Newsletter