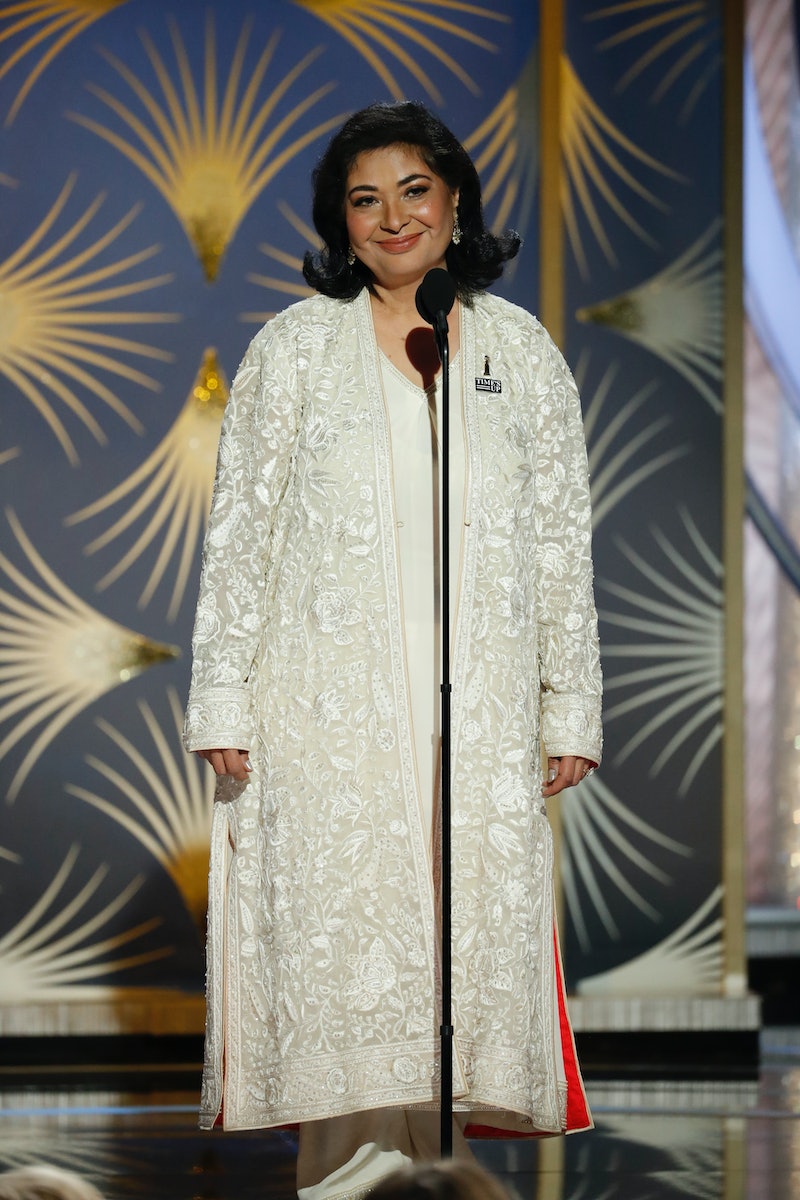 The Golden Globes have a reputation that's unique among awards shows. In recent years, the ceremony, honoring some of the best in film and television, has become known as the rowdy party of awards season. While there is booze at the Oscars, it's relegated to a bar outside the auditorium. At the Globes, the alcohol flows freely at the tables, and hosts roast both the guests and nominees. The body that runs and votes for the awards are a group of 88 international entertainment journalists, and to many, the Hollywood Foreign Press Association is a relatively enigmatic bunch whose choices sometimes confound others in the industry.

But the HFPA's current president, Meher Tatna, wants to change all of your perceptions about the group and the Globes. It's not that she wants to take away the fun and frivolity of the ceremony, surely, but she also wants you to know that the HFPA is more than just its often-eclectic taste in movies. In fact, the organization's growing philanthropic endeavors are its new heart and soul, a move Tatna mandated upon her election. Two years into her presidency, she's managed to increase the HFPA's profile as a charitable institution and she calls it "the best" aspect of her job when we speak over the phone a few days before the 2019 ceremony, hosted by Andy Samberg and Sandra Oh.

"We've done a lot of events as a charity," she says, "And representing the organization at those has really been the most rewarding part."

Over the last 25 years of its 76-year history, the HFPA has committed over $33 million in donations to entertainment-related nonprofit organizations, humanitarian work, film preservation, restoration, and scholarships, according to Tatna. Recipients include such groups as Veterans in Film & TV, Women in Film, Women Make Movies, Los Angeles LGBT Center, GlobalGirl Media, and more. At the 2018 Globes ceremony, the HFPA committed $1 million to both the Committee to Protect Journalists and the International Consortium of Investigative Journalism, a clear statement in the era of #fakenews.

"Those are things that I am really, really proud of," Tatna says.

(Update: At the 2019 ceremony, Tatna announced two new $1 million grants made by the HFPA to Reporters Committee for Freedom of the Press and InsideClimate News.)

Stepping into the role that allows her to facilitate these donations is a culmination of Tatna's early professional journey. Born in Mumbai, India, Tatna came to the United States to attend Brandeis University on a scholarship. She got a degree in economics, but then set out for New York and Los Angeles in hopes of becoming an actor. She waited tables and pounded the pavement, but wasn't having much luck landing gigs.

"Back then you didn't see a lot of people who looked like me on TV or in the movies," she says. "It was a bit of a slog. Sporadic jobs, nothing steady, nothing I could make a living on. So I decided instead of dropping out of the industry, why don't I write about it?"

She began writing about Hollywood for The New Paper, a magazine in Singapore. Years later, after spending years in journalism, she is now the president of the HFPA. But despite her important role, she still has to file her film reviews and reported stories.

"I don't sleep much," she says, laughing. "I have to keep up with my deadlines. The president job will go away, but I have to keep up my journalism job. I work it out with my editor, and he is very supportive of the Globes and [during Globes] week, fortunately, I have no deadlines."

Like many working women, Tatna is trying to juggle multiple roles with some semblance of balance. "The hardest part is time management. There are just not enough hours in the day to get everything accomplished, and managing my stress levels because of that," she says.

One of the other worthy shifts taking up Tatna's time has been evolving the idea of Miss Golden Globe. A Globes' staple, the role usually goes to the young daughter of a Hollywood star. She'd help out during the ceremony by handing out the trophies and escorting winners off the stage. In recent decades, young men have participated as well, taking on the title Mr. Golden Globe. In 2018, the title was changed to Golden Globe Ambassador to be more gender-neutral and to better reflect the organization's goals of gender parity. The role now requires the selected person to chose a philanthropic endeavor. 2019's ambassador, Isan Elba, daughter of Idris Elba and Hanne Norgaard, chose to focus her efforts on the subject of mental health.

Equality and equal representation for women is something that Tatna is keeping in mind as she goes about her duties. The 2018 Globes ceremony had a somber aura in the wake of the rise of #MeToo. It was the first awards season event that found celebrities wearing pins acknowledging Time's Up and its initiatives on the red carpet. The crisis hasn't been solved in the previous year, despite that visibility, but Tatna says she is hopeful that Hollywood is changing.

"We ask all the women we interview at our press conferences, and the consensus is that there has been some progress," she says. "It is slow, but it is going in the right direction and hopefully there will be no going back from this. We will move forward and we will achieve parity in salaries, in status, in opportunities." The president points out that, of the 88 members of the HFPA, the majority are women.

So while it is Tatna's hope that the HFPA will be at the forefront of pushing the industry into a more inclusive future, there are elements of the annual broadcast that you shouldn't expect to change. Globe nominations and winners don't always line up exactly with the Oscars or other guild organizations, but the president has a good idea of why their choices can be (and will continue to be) surprising. Being composed of journalists from all over the world, the diversity inherent in the Globes' voting body leads to a more eclectic selection. That, and the fact that their jobs require them to see movies. A lot of movies.

"We have pretty much seen everything because we cover it for our outlets, and maybe that's not the same case for the other voting groups for the other award shows," Tatna points out. (Indeed, there have been plenty of Oscar voters who have admitted that they didn't actually watch all of the films they've voted on.) "Yes, sometimes we do have a different sensibility from mainstream American tastes, but then we are international journalists, so maybe our tastes are a little bit outside of the mainstream," she adds.

Those unexpected winners, ceremony surprises, and oh, my god moments of the Globes certainly make for great television, and in turn the revenue from the broadcast is what allows the HFPA to partake in its charitable causes. So though Tatna hopes you still tune in for the fun stuff, she also wants you to know that there's much more to the event than just that.