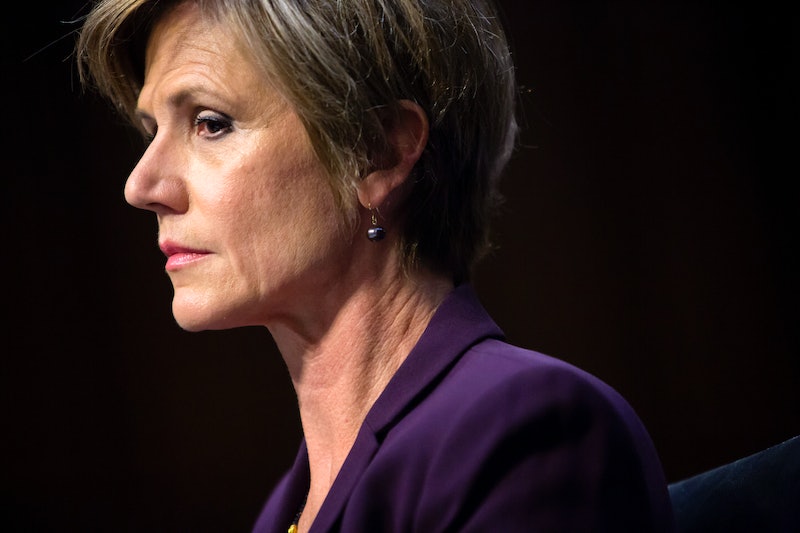 On Monday, members of the Senate Judiciary Committee met to hear former acting Attorney General Sally Yates' testimony on potential Russian interference in the 2016 presidential election. However, it quickly became clear that committee members were focusing on questioning her credibility more than that of former national security advisor, Michael Flynn. Reminiscent of other high-profile hearings from recent memory — particularly those involving Secretary of State Hillary Clinton and Planned Parenthood CEO Cecile Richards — it wasn't the men out to discredit Sally Yates, but her composure while in the hot-seat that resonated most of all.

And, if the other hearings are any indication, Yates' grace-under-fire performance will likely endure in ways that her adversarial questioners didn't anticipate — not unlike Clinton's 11-hour Benghazi hearing or Richards' Planned Parenthood testimony. Despite the notoriously short memory of the internet, the women who do manage to bear the weight of winding (maybe irrelevant) partisan questions, frequent interruptions, and rampant, unapologetic condescension with grace, tact, and professionalism tend to achieve a sort of internet folk hero status. Their cool, calm, and collected approach to gendered and political attacks live on as the purest kind of inspiration for those who are trying to remain defiant and resistant in their own lives.

I can't be the only one who absolutely loves to see these women stare down, outrun, and outlast the dudes who are out to embarrass them and the causes they hold dear. It's why American women tend to keep the memory of these victories alive as symbols of defiance. It's why Richards' smooth live source-checking of Rep. Jason Chaffetz's now-infamous axis-less graph is considered iconic. After an afternoon of being interrupted and accused of criminal activity, Richards casually fact-checked the Utah congressman's misleading data acquired from anti-choice organization Americans United for Life.

It's also why the bored, casual screen-grabs of Clinton from her marathon Benghazi hearing in October 2015, have a remarkably long shelf-life as a meme/reaction .GIF. Meanwhile, Rep. Trey Gowdy's performance was widely dismissed as an insubstantial, time and resource-wasting display of partisan showmanship that didn't reveal anything new about the so-called scandal. Ouch.

And, most recently, it explains why Twitter lost its collective mind when Yates took down Sen. Ted Cruz during Monday's hearing after he criticized her refusal to defend President Trump's travel ban (which subsequently got her fired). He also implied that she was ill-prepared and ill-informed about her job because she wasn't able to parrot back a specific section of U.S. code (8 U.S.C. Section 1132) immediately after hearing him name it.

When faced with a glaring "well, actually ... " play, Yates was quick to respond with a power move of her own, by reminding him of the constitutional concerns involved with the order:

... I'm also familiar with an additional provision of the [Immigration and Nationality Act] that says, 'No person shall receive preference or be discriminated against in issuance of a visa because of race, nationality or place of birth.' That, I believe, was promulgated after the statute that you just quoted. And that's been part of the discussion with courts, with respect to the INA, is whether this more specific statute trumps the first one that you just described. But my concern was not an INA concern here. It was, rather, a constitutional concern: Whether or not this — the executive order violated the Constitution, specifically with respect to the establishment clause and equal protection and due process.

There's no nonsense. She isn't flustered. She just knows her stuff and is ready to move along.

While there's something to be said about the power of unapologetic, warranted anger, the effect of unflinching indifference in response to partisan flexing can be just as resonant. While the former is fiery and righteous in the face of dubious accusations, the latter refuses to validate or indulge fallacies and already-debunked talking points. Whether it's Chaffetz's misinformation, Gowdy's dead-horse-beating Benghazi probes, or Cruz's attempt at legal mansplaining, these women come out on top without breaking a sweat.

It's no surprise that American women are rooting for women who can remain unfazed and unbreakable in the fray. Think of it as a response to a culture of political gaslighting, where facts just don't seem to be enough. By utterly refusing to play in the game, one that we've all been reluctantly sucked into, Richards, Clinton, and Yates succeeded at "going high" while their opponents went impossibly low. It's these women and their spectacular feats of fool-suffering that history's going to remember long after the news cycle moves on.