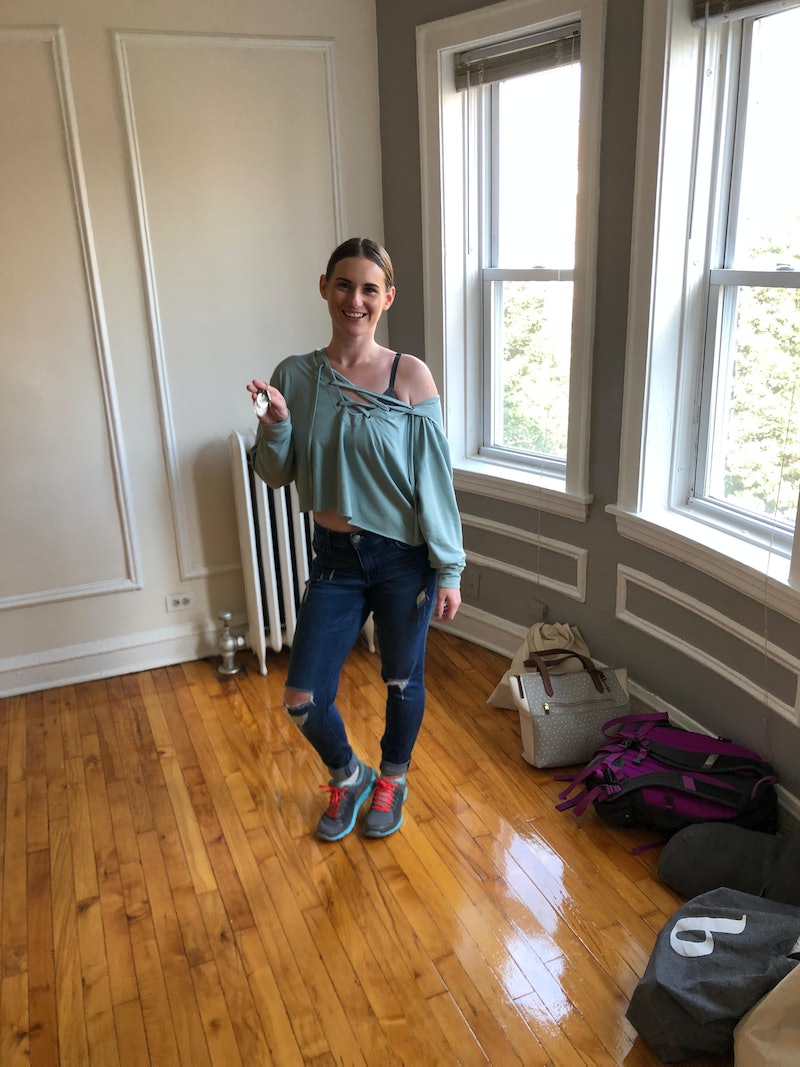 As much influence as money has over our lives, it’s one of those subjects that’s just not easy to talk about — especially for young women. According to a 2015 survey from Fidelity, eight out of 10 women said they don’t discuss finances with friends or family, and it’s not exactly hard to understand why. First of all, in the grand scheme of things, women making up a large part of the workforce is a relatively new phenomenon, which means women aren’t used to being included in the conversation about money.

There’s also the sobering fact that many millennials (not just women of course) are dealing with outrageous student debt — the average borrower owes $30,100, according to the Project on Student Debt — and a job market unlike anything our parents’ generation experienced. That combo means many millennial women are in less-than-ideal financial situations, which is an understandably touchy, and at times scary, subject. And unfortunately, not everyone has the means or the financial knowledge to easily extract themselves from a bad financial situation.

“If you don’t learn about managing money at home, you don’t learn it at school, then you actually learn by making costly mistakes,” Ramona Ortega, founder of My Money My Future, a personal finance web app for millennials, tells Bustle.

As a young woman who’s spent the last three years struggling as a freelance journalist in New York City, I know firsthand what it’s like to feel ashamed to openly talk about my financial situation. For the first nearly two years I lived in NYC, I had a terrible relationship with money: I was underemployed, living paycheck-to-paycheck, and had basically no idea how to dig myself out of the hole I’d gotten into. Many times, I had to rely on my extremely gracious roommates to front my share of the rent, paying them back $200 here and $50 there, whenever my meager paychecks were deposited. I was avoiding calls from student loan debt collectors like the plague, and was almost constantly anxiety-ridden. Needless to say, I was financially drowning — and most of the time, I felt powerless to dig myself out of the hole I’d trapped myself in.

But it wasn’t just my rent and bill payments that were affected by my constantly near-empty bank account: my relationship — which began right when my financial situation was at its worst — was also majorly impacted by my relationship with money. But taking control of my finances changed my life... and ultimately ended my relationship.

How Money Influenced The Beginning Of My Relationship

In the fall of 2016, I felt really alone. At that point, I owed one of my roommates more than $1,000 in back rent, and my relationships with all my roommates were strained as a result. I was working from home, barely speaking to my roommates, and couldn't afford to go out with my friends — all of which made me feel extremely isolated and depressed. I'd always been an active online dater, but at this point in my life, going on dates (where my meals were typically, though not always, paid for) was almost the only social interaction I was getting.

That November, I got lucky and met the person who would go on to become my first long-term partner ever. From the moment we started spending time together, it was like a weight had been lifted: it felt great to have someone on my side — someone who didn't care how much money I had (or didn't have) and who would hang out with me even when I couldn't afford to go out and do anything.

For a while, the relationship worked for us: we liked spending time together, and it was a relief knowing that I had a person to vent to when I got stressed about money stuff, someone who would offer support and help rather than looking down on me. But when I look back on our relationship, I realize that, had I been in a different, more stable place when we met, things might have turned out a *lot* differently for us.

"In my experience the person you are with is a reflection of where you were with yourself at the time you met," Tracy K. Ross, LCSW, couples therapist, and relationship expert, tells Bustle. "If you are lonely and unhappy you will be radiating a certain type of energy and some will be drawn by it, others will not."

Of course, all this isn't to say that I didn't have a legitimate connection with my partner, or that I think the only reason we were together is because I was desperate for a support system. Nonetheless, it's clear to me that I was so happy to have a partner to stand by me when I was at a difficult time in my life that I was more willing to overlook red flags and ignore our incompatibilities. There's no way to know for sure — and I certainly don't regret any part of our relationship — but I suspect that had I been happier, more confident, and in a better place financially when we met, I might not have necessarily viewed the beginning of our relationship in the same way.

In the summer of 2017, however, things started to look up for me. A friend helped me snag a part-time job at a wine store, and I was finally making enough money to keep myself afloat. I gradually started to feel more like myself again: my relationship with my roommates had gotten better now that I was paying rent on time, and I was able to accept invitations to go out to bars and restaurants because I could actually afford it for once.

I was slowly gaining my confidence back, and I felt so relieved knowing that the days of begging my single mom for money or having to text my roommates "sorry, will get the rent to you ASAP" were over. At the same time, I was starting to realize that my partner and I didn't see eye-to-eye on a lot of things, and I was generally questioning whether or not we were right together long-term.

Unfortunately, as anyone who's lived in NYC can attest, being coupled up can be a massive help financially. Even though my partner and I in no way had combined finances, I always assumed we were on the path to moving in together when my lease ended. I knew that I couldn't afford to live alone in NYC, but I wasn't altogether certain that my partner and I should live together (and I didn't really want to room with totally random people at age 25). Even though I was unsure about our future, I figured I might as well stay in the relationship... because otherwise, where would I live when my roommates and I parted ways at our lease's end?

Then, in January 2018, everything changed. I visited Chicago — where I went to school and where most of my friends live — and I was immediately overwhelmed with the feeling that Chicago, not NYC, is where I really belonged. Soon after, my income was good enough that, with the help of one very good friend, I was able to start a budget that would allow me to save up enough money to move back to Chicago on my own.

After that, my relationship was all but over, although it was definitely a slow burn. It took a few months to really admit to myself that what I wanted was a totally fresh start back in Chicago — without a partner. Eventually, when it could no longer be denied that my life was heading in a different direction thanks to my newfound financial freedom, we mutually parted ways. I was sad to have my first relationship come to an end, but I was grateful that it was drama-free, and that my now-ex voiced his support and told me that he knew moving was the right choice for me, even though it was hard for him.

Why Becoming Financially Independent Is Empowering

Although this might sound like a sad story in some ways, I can assure you that it is anything but. Having been through such financial hardship in my early twenties has really shaped the young adult I've become, and I now know how important it is to plan and budget — even when it feels overwhelming and scary.

“While not everyone needs a financial advisor, and in fact, I believe that women in particular need to be empowered to manage their own financial affairs, it is important to have an accountability buddy for your money matters,” Ortega says. “Someone who can keep you on track without judgment.”

My makeshift financial advisor is one of my best friends: he literally spent hours making me a spreadsheet that functions as a detailed budget and expense tracker, so I never have to blindly wonder what my finances are looking like again. If I hadn't been fully open with him about my financial situation, he wouldn't have been able to help me come up with a plan to make things better — and I might still be in the same awful financial situation to this day.

Whether it's a friend, family member, significant other, actual financial advisor, or even just a stranger in a financial advice forum, it's important to have someone to talk to about your money troubles. Although it might feel like you're totally alone in your struggles, the truth is that many millennials are experiencing financial difficulties — so we might as well be open and honest with each other about it. Particularly for young women who might have been conditioned to be "private" about money matters, it's important to empower yourself to speak up and take action when you need financial help.

“I think millennial women are more worried about financial stability now more than ever before and rightfully so,” Ortega says. “I think that they are very aware of their decisions, even when they have made a mistake, and so the opportunity here is letting them know that they can hit reset and get their financial lives back in order by prioritizing themselves."

For me, hitting the reset button — both on my financial outlook and on my relationship status — was something that I knew I needed to do for a long time. I made a lot of money mistakes as a recent college grad, and although I'm sure I'll make plenty more in my life, for the time being, I feel happy, comfortable, and empowered to take on my future.

All it took was me opening up about the bad financial situation I was in and the help of one amazing friend to literally change my life, so don't be afraid to take the next step toward gaining control of your financial future, even if all that means is admitting you're in a bad place. As of today, I'm writing this from the comfort of my very own studio apartment in Chicago — and I'm actually looking forward to paying the rent all by myself (and on time, too).

More like this
The 19 Best Tweets & Memes About Bisexual Awareness Week
By Lexi Inks
How To Politely Reject Someone Who Keeps Asking You Out
By Laken Howard and Lexi Inks
21 Signs You're Not In Love Anymore
By Sara Altschule, Kathleen Ferraro and Carolyn Steber
Are Quality Time & Gift-Receiving Love Languages Compatible?
By Lexi Inks
Get Even More From Bustle — Sign Up For The Newsletter