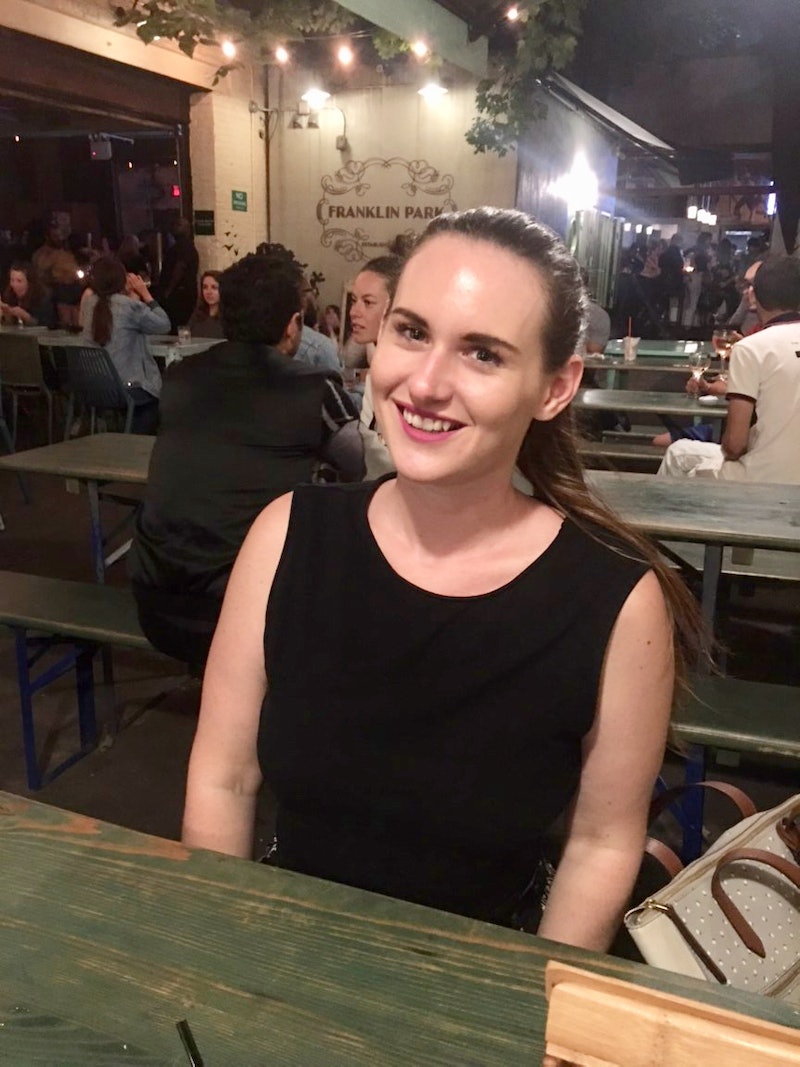 For most of my adolescent and young adult life, I was pretty much the textbook definition of the perpetually single girl — and honestly, I hated it. My always-solo relationship status wasn't for lack of trying, either: during college I swiped through so many men on dating apps that I'm shocked my thumbs are still functioning to this day. But as much time and energy as I put into online dating, meeting new people, and making connections, I didn't manage to find a partner who actually stuck until I was well out of college at age 23 — which I consider to be pretty late in the game for my first real long-term relationship.

But now, almost two years later, my first relationship has ended, and post-breakup, I've found myself in a mindset that I definitely wouldn't have predicted. For the first time, I feel not just resigned to being single, but *excited* by it. In honor of National Singles Day on September 22, here's how my relationship status has changed over the years — and how my new perspective on dating could change my romantic future.

The Pressure To Find A Partner

Before I finally got my first LTR under my belt, I was always the sort of person who was open to love — and was usually actively seeking it. Of course, my willingness to put myself out there and look for a partner can be explained in part by my personality: outgoing, sensitive, and open-minded. But I also suspect a large part of the pressure I felt to find a relationship can be attributed to all the messages that I, and tons of other singles, receive all the time from the media we consume.

Particularly for young women, the oh-so-romantic fantasy of finding your happily ever after is ingrained in us from a young age, and as young adults, we unconsciously start to 'other' ourselves if we remain single while all our friends become coupled up. Unwittingly, I'd internalized tons of harmful messages about love and relationships; in particular, the notion that I was missing out on some unique kind of happiness that only a relationship and ~true love~ could provide me.

But one crucial thing I didn't realize until after experiencing my first real relationship? If you're hyper-focused on finding someone — or rather, anyone — to be your partner, that can actually be an impediment to your dating success. Because when you're desperate for a relationship, you're probably not in the right headspace to find someone who will suit you long-term.

"In my experience the person you are with is a reflection of where you were with yourself at the time you met," Tracy K. Ross, LCSW, couples therapist, and relationship expert, tells Bustle. "If you are lonely and unhappy you will be radiating a certain type of energy and some will be drawn by it, others will not. Think about who those people are and what kind of relationship is possible. If you are looking for a relationship to fill holes in your life you may just settle for anyone who is mildly compatible. It takes a lot more than that to sustain a relationship long-term."

That was certainly true in my case: when I met my now-ex, I was at a very low point in life — I was lonely and in need of a support system of any kind in NYC — so having a partner felt like something I needed rather than wanted. And even though there were many things I loved about my ex, because I wanted a relationship so badly, I was more willing to overlook red flags or ignore glaring incompatibilities in the beginning... which ultimately led to our breakup.

How I Learned To Embrace My Single Status

After the initial (and necessary) grieving process for my relationship's end, I was slowly able to appreciate and embrace the newfound freedom I had. Anytime I started to feel sad during my downtime, I'd tell myself to spend a few hours doing something I wouldn't have been able to do with my ex, like watch Vanderpump Rules all evening or reread Harry Potter for the thousandth time. It might sound silly, but small self-care moments like that helped me to realize that I'm perfectly capable of having fun by myself, as long as I'm focusing on doing things that fulfill me (even if it's in a trivial way).

Now that I've experienced a serious relationship, I know exactly how much energy and effort goes into maintaining one, and that's another thing that helps me embrace being single, rather than resent it.

"Realize that you can only truly be content when you are happy from within," Ross says. "External solutions to internal problems never work, they may make you feel better temporarily but it won’t last. If you are overly anxious to find a relationship you should examine what else is 'missing' from your life — what are the other parts of your life that need attention? — if you work on those you are greatly increasing the odds of finding a better relationship even if it takes longer."

Now that I've experienced a serious relationship, I know exactly how much energy and effort goes into maintaining one, and that's another thing that helps me embrace being single, rather than resent it. I can take the time I'd normally spend nourishing a relationship and invest it back into myself, whether it's in the form of exploring a new hobby, spending time with friends, or making strides professionally.

I've also noticed (somewhat ironically) that now that all I have is alone time, I appreciate it a lot more than I did when I was in a relationship and probably really needed it. I'm learning to be content on my own and support myself, instead of relying on another person to be my support system and keep me entertained — and it's a really empowering experience.

Why No One Should Ever Be Ashamed Of Being Single

Another thing that's helped me change my perspective on being single is the comforting thought that, as lonely as being single can sometimes feel, all of us singles are actually far from alone. According to recent data, more people are staying single by choice than ever before. According to the U.S. Census Bureau's data in 2017, 110.6 million people 18+ in the country are unmarried, which is 45.2 percent of U.S. residents — and 53 percent of those singles are women. And according to Pew Research, the biggest positive change in unmarried singles recently has been among adults under 35, aka millennials.

So even though it might feel like everyone else on Earth is in a relationship, being single is more common than you think, and the pressure you feel to couple up is likely just something you're projecting onto yourself as a result of seeing so many "happy" couples on your social media feeds or TV screens. The good news? You don't have to cave into that pressure if you don't want to.

Ultimately, being single is neither a label to be ashamed of, nor a status to shed at the first available opportunity.

"You are the only one who is putting that pressure on yourself — take a step back," Eric Resnick, owner and lead dating coach at ProfileHelper.com, tells Bustle. "Realize that what you see in the relationships around you is just the shiny, happy parts. It makes not having someone feel like you are missing out, but you aren't."

Ultimately, being single is neither a label to be ashamed of, nor a status to shed at the first available opportunity. As cliché as it sounds, being single is actually just an amazing chance to invest your time in you and do whatever it is that you need to do to become your best self. That way, when or if you do decide to find a partner, you'll be more confident in yourself and sure of what you want, which makes you better equipped to find the right relationship, not just *a* relationship.

But if you're totally content doing your own thing, you shouldn't feel pressured to change your single lifestyle just to conform to some inaccurate and stigmatized standards. So whether you're single and mingling, single and looking to settle down, or single and not dating at all — embrace your single status, and don't be ashamed to proudly admit that the only person you're 'taken' by is yourself.

More like this
The Best Time To Date After A Breakup, According To Experts
By Bustle Editors
Is It A Rebound Relationship Or The Real Thing?
By Carolyn Steber and Lexi Inks
Are Quality Time & Physical Touch Love Languages Compatible?
By Lexi Inks
Cookie Jarring Is The Dating Term You Need To Know
By Sophie McEvoy
Get Even More From Bustle — Sign Up For The Newsletter