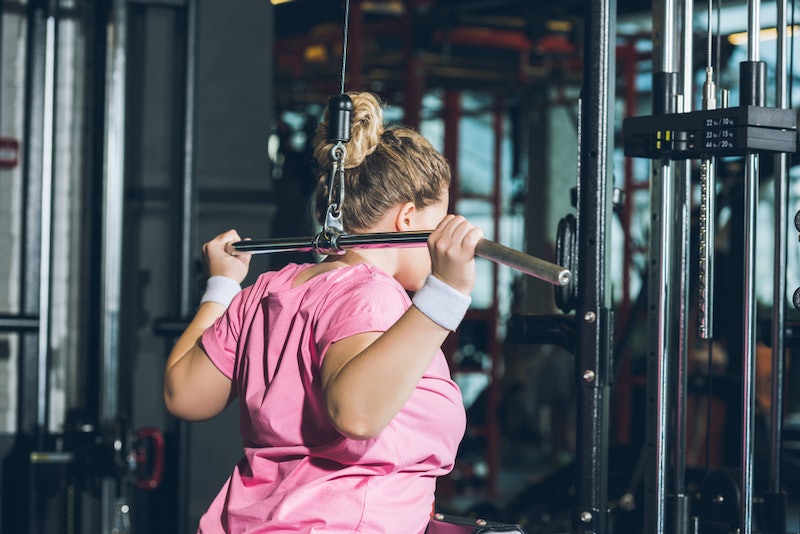 People exercise for many reasons, and one of the major ones is for its mood-boosting benefits. But as someone who lives with co-occurring mental illnesses, I was skeptical as to whether these benefits would actually work for me. However, as I read more and more research about the therapeutic benefits of working out, I decided to give exercising on the regular a shot. Developing an exercise routine as a way to cope with my PTSD and eating disorder became a pivotal moment in my healing process — and dramatically changed my relationship with my body for the better.

There’s a wide body of research that speaks to the positive impact exercise has on your mental health. Walking alone has been shown to release endorphins, lessen fatigue and symptoms of depression, improves your overall brain health, and even increases the production of BDNF — a protein that strengthens memory, as well as your ability to learn. These brain-boosting benefits go way beyond cardio and aerobic exercise: As Tonic reported this past December, studies have consistently found strength and resistance training (aka, lifting weights) may be even more effective when it comes to dealing with depression and other mental health issues.

Specifically, research has shown that exercise is an effective adjunct treatment that can reduce the severity of symptoms associated with PTSD. So much so, clinicians have developed practices such as trauma-informed yoga. What's more, a 2016 review published in the journal of Medicine and Science in Sports and Exercise found that working out — in a therapeutic and balanced way — actually improves eating disorder treatment outcomes for a majority of people.

I’ve lived PTSD for well over a decade (though I was officially diagnosed in my early twenties), and have experienced dissociation, depersonalization, and the other symptoms periodically throughout my life. In my early teen years, I developed bulimia as a way to deal with the sense of powerlessness that trauma caused and the lack of autonomy I had over my own body. As I moved through my mental health recovery years later, I began to develop an exercise routine as a way to replace the harmful coping skills that I had relied on for so long with a healthy outlet. Before bulimia, I always loved to be active and played various sports all year long. But during the height of my mental health issues as a teenager, activities I enjoyed quickly fell to the wayside. At times, exercise even became a way for me to “punish” myself during my eating disorder.

It had been so long since I had a healthy and compassionate relationship with my body, that beginning a new workout routine in my twenties was like starting from scratch. At first, just having to “be” in my body while exercising was an overwhelming experience — almost to the point of being unbearable. I’d dip early from workout classes, leave the gym after running for twenty minutes, and end up filled to the brim with panic. I’d think to myself, If exercising is supposed to be so helpful, why do I feel so uncomfortable?

I learned that this initial discomfort and anxiety I felt while working out was actually a very typical response that many people who’ve been through trauma and abuse face. “Traumatized people chronically feel unsafe inside their bodies: The past is alive in the form of gnawing interior discomfort,” trauma expert Dr. Bessel van der Kolk explained in his book The Body Keeps The Score. “Their bodies are constantly bombarded by visceral warning signs, and, in an attempt to control these processes, they often become expert at ignoring their gut feelings and in numbing awareness of what is played out inside. They learn to hide from their selves. [...] Trauma victims cannot recover until they become familiar with and befriend the sensations in their bodies.”

I kept going back to the gym, doing what I could, and not punishing myself for not staying as long as I’d planned to. In many ways, exercise started to help me bridge the gap between my mind and body that the years of trauma I experienced had created — and that my eating disorder perpetuated. I still felt uncomfortable, but each day I tried to incorporate exercise into my routine, it became easier. And right after my workouts, my mood would improve, while my anxieties and fears would dissipate.

I found that much like dialectical behavioral therapy (DBT) and meditation, exercising requires mindfulness. It demands that I be present in that very moment, and quiets the intrusive thoughts that PTSD can cause. I don’t have time to obsess and ruminate on my negative body image when working out because I’m too busy focusing on accomplishing the task at hand — whether that’s resistance training, or pushing through the last five minutes of a 40-minute run. If I begin to dissociate or get stuck in the past when working out, I’m able to recenter myself much faster when I’m at the gym. More than anything, exercise has helped me relearn to respect and communicate with my body, and appreciate all that it does for me — despite the trauma it's experienced.

Sometimes, trauma makes me feel as though the air has been knocked out of my lungs — like I have no sense of foundation, my reality crumbles, and I can’t trust myself or anyone else. On these days, exercise is one of my go-to coping skills for grounding myself. As difficult as it can be to haul myself out of bed, I always try to take that first step for the sake of my mental health (not always successfully, I should add). I feel strong when my mind and my body feel connected, and work together — rather than against each other.

Don’t get me wrong: I don’t think exercise is the best coping skill for everyone, and it’s not a cure for mental illness. However, many of the skills I have to utilize in the gym — like mindfulness, deep breathing, and recentering myself — are the same ones I use when I’m triggered and trying to cope anxiety, flashbacks, and eating disorder urges. There are some days I feel stronger and more prepared than others to cope with my PTSD and eating disorder; I know that my mental illnesses will always ebb and flow throughout my life. It may sound a little cheesy, but like learning to live with mental health disorders, exercising is all about perseverance, patience, and self-compassion — and it's become essential to my recovery process.