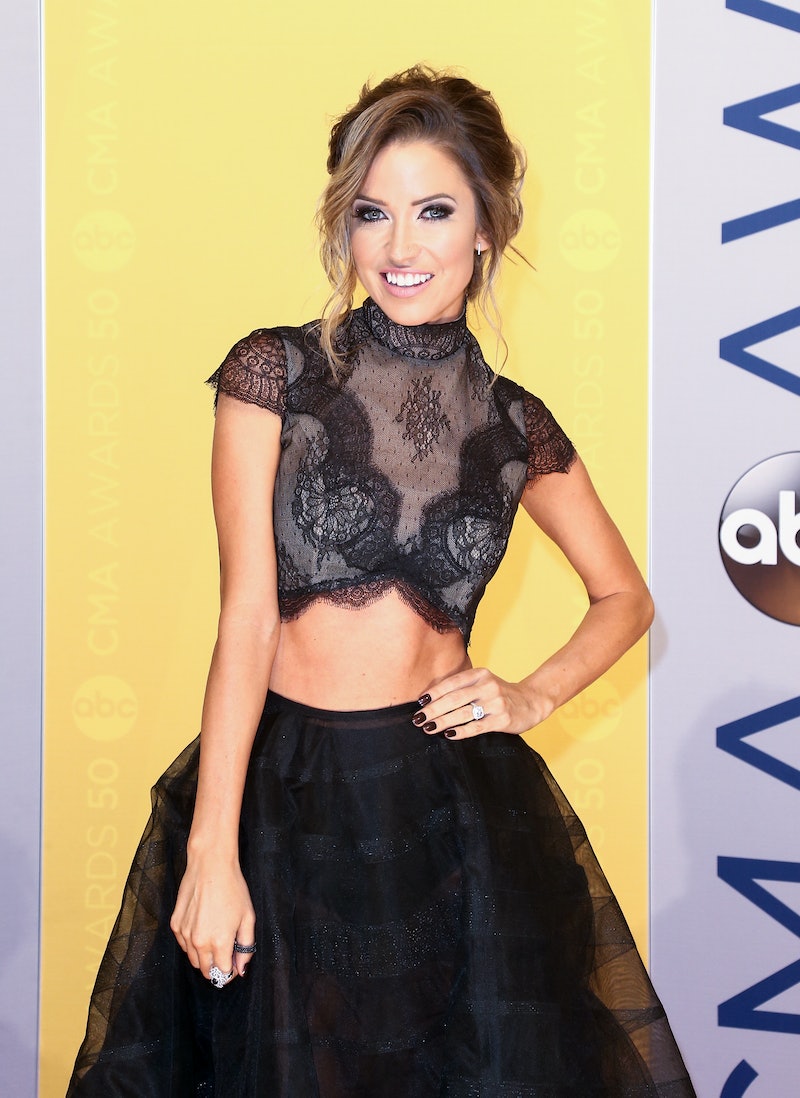 Viewers first met Kaitlyn Bristowe back in January 2015 when she emerged from the limo on Chris Soules' season. With one dirty joke about farming and a season full of hilarious commentary, Kaitlyn quickly became a fan-favorite in Bachelor Nation, even going on to become the next Bachelorette. For a long time, Kaitlyn’s relationship with the hit ABC franchise was a little complicated. But now, nearly four years later, she's emerged from a show about finding a traditional happily-ever-after by cultivating her own girl gang. Through her wine-fueled podcast, Off the Vine; line of scrunchies, Dew Edit; and new relationship with fellow Bachelorette alum Jason Tartick; Kaitlyn is reclaiming an experience she felt conflicted about before.

As fans may recall, by being her unfiltered self and doing things "other Bachelorettes haven't done," her season was deemed controversial. "I was actually angry for awhile," Kaitlyn says with a laugh during a recent phone interview with Bustle. "And I didn't realize that until lately. I think I was a little bit bitter towards the show and towards how I was portrayed." After Kaitlyn had to compete with contestant Britt Nilsson for a chance to even be the Bachelorette, she experienced online trolling and slut-shaming post-show.

Kaitlyn channeled that resistance into a positive, though. She decided to start "ignoring the hate" and focus on women who came up to her, saying things like, "'It’s so nice to see someone that’s just not trying to be who they think they should be, and just owning who they really are.'"

There's no question that Kaitlyn owns who she is during her podcast, which just finished a seven-city live "Spring Break" tour. She interviewed other Bachelor Nation faves along the way, including Colton Underwood, Ashley Iaconetti, and Blake Horstmann. Always on hand for the events? Wine. She'll crack open a bottle (Caymus is her indulgent fave) and get real, trading confessions with guests.

Kaitlyn is an open book by nature, but she's noticed how positively listeners — who she affectionately calls "Vinos" — respond when she posts a photo sans makeup or admits vulnerabilities. It's even made her want to share more. "I can't get over the group of women that listen to this podcast," Kaitlyn says. "Like I just wish I could be friends with everyone." She's grateful to connect with fans online, but feeling that energy at her shows firsthand is "life-changing."

One common sighting at Off the Vine live shows is scrunchies — lots of them. In June 2018, Kaitlyn launched her own line of scrunchies called Dew Edit that typically sell out within days, if not hours. "I just feel like it’s a testament to making something that you love into something you wanna share with your audience," Kaitlyn says, who prefers them to elastic bands that'd break her fine hair.

Kaitlyn's podcast also led to meeting Jason, who competed on Becca Kufrin's Bachelorette season and was a guest on Off the Vine last November. Despite immediate chemistry, Kaitlyn didn't want to date anyone from the show. "Meeting Jason I was like, I couldn't fight it," she admits. "I tried to fight it. I was like, 'No, no, I'm not going to date a Bachelor guy.'" But after some Instagram flirting, on her podcast in January the pair made plans to meet up in Denver for drinks and dancing, documenting the evening on the 'gram.

Although being long-distance is "the worst" (his home base is in Seattle, hers is Nashville), she says, "Down the road, obviously we would like to change that." But for now, they're just enjoying each milestone and Jason is even a perennial guest on her pod. She can't seem to contain her excitement whenever his name is brought up.

"I feel so much support from everybody," Kaitlyn says. "I mean I know everyone looks happy on Instagram, but I feel like people can really genuinely see my happiness." She admits she felt "a little worried" about "how much to share and I didn’t want to be insensitive to my last relationship," but at the same time, she's a very open person. "Whether that’s happiness or tough times or whatever I’m going through, I can’t hide being so happy."

Kaitlyn's new relationship came after the end of her three-year engagement to Shawn Booth, who proposed to her on The Bachelorette. Some of her mixed feelings about the show actually stemmed from its impact on their relationship. "I was with somebody who was hurt by my actions [on the show], and it kind of stuck around the whole relationship," Kaitlyn recalls, without getting too specific.

While the breakup was "really tough," knowing her self-worth helped Kaitlyn wade through that pain and open the door to happiness. "I was like, 'I know what I deserve. I know what makes me happy. I know what I want. And I know I don’t need somebody in my life to make me happy.' But I'm ready to have that person in my life to add value to my life," she says.

She's seemingly found that with Jason, who not only taught her about teamwork, but never feels threatened by her success. "He just is my biggest cheerleader," Kaitlyn gushes. "Like he is such a hype man and, he always tells me, 'Oh, you have so much impact on people and you’re just so empowering and I’m just so proud of you.'"

Continuing to expand her entrepreneurial efforts, next month she's releasing her own wine label that she wants to be "a representation of where I am today." As much as she's loved the tasting process ("I was like, 'This is me on the business side? I get to just taste all this wine and decide on which one I'd like?'"), Kaitlyn is passionate about curating every aspect of "this strong, bold brand."

After everything that's happened, Kaitlyn now reflects positively on the "powerful platform" the Bachelor franchise provided. "I've created so many amazing things from it and have found somebody that I’m so happy with that I just look at it way different now," she says. So much so that she deems it "the best thing that's ever happened to me.'"

By staying unapologetically herself and connecting with others, Kaitlyn turned a frustrating experience into a meaningful message. "I saw this group of women that could come together and be this force and stand up for who they are and just kind of shift the mindset of what people think that they should be," Kaitlyn says.

Now her fans are "feeling empowered to speak up, be themselves, be inspired, start their own businesses, to go to work on their passions." With a scrunchie on her head and wine glass in hand, Kaitlyn created a brand that allowed her to find love from The Bachelor after all, while retaining self-love first and foremost.