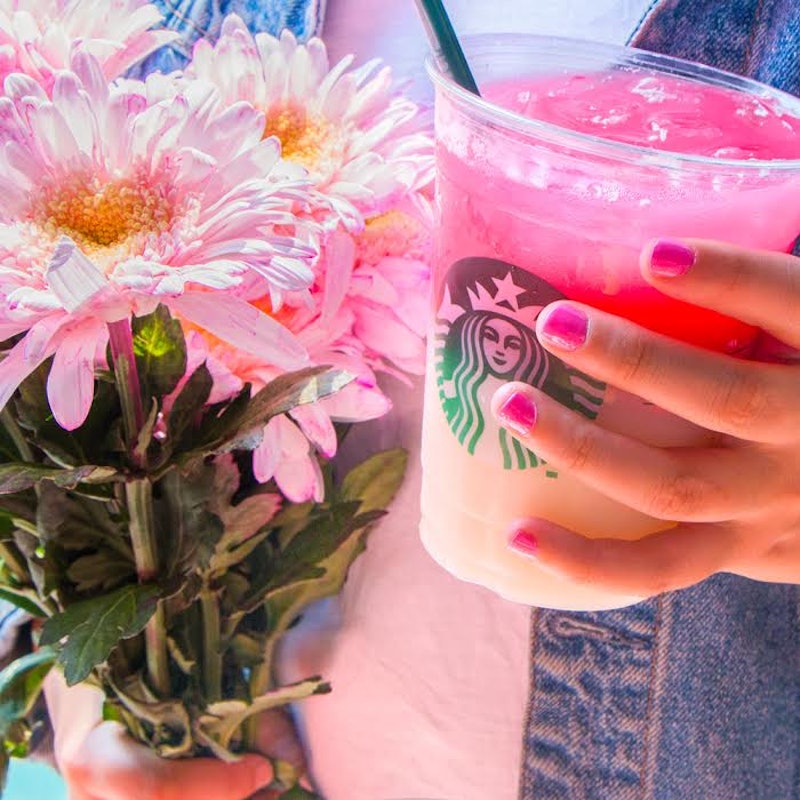 In these uncertain times, Starbucks has taken it upon itself to soothe our existential angst with an array of delicious, ‘grammable concoctions. Some of these magical mixes seem to vanish as soon as they appear, too pure for this cruel world — the Unicorn Frappuccino only stuck around for a few short days in April. However, if you are wondering how long the new Starbucks Ombre Pink Drink will be available, you're in luck — the beverage has officially been added to Starbucks' year-round menu.

The OPD is a spin on Starbucks’ Pink Drink, a former secret menu item made with Strawberry Acai refresher and coconut milk that was invented by customers last year, and only became a permanent menu item this April. Baristas have been teasing its ombre progeny on Instagram for weeks, and the new drink officially launched on June 1.

According to Starbucks, the Ombre Pink Drink combines the goodness of Cool Lime Starbucks Refreshers with Coconutmilk and Teavana Shaken Iced Passion Tango Tea for a result that is super sweet, fruity, and generally amazing.

Want to see this glorious, summertime beverage in all of its ombre glory? Feast your eyes, my friend. So much pink! So much magic!

It basically looks like someone tapped into the collective Millennial psyche, and what came out was vibrant, pink, sugary goodness. It is a drink to sip while you outline your "personal brand," complain about "adulting," and debate whether or not you should buy overalls. It is the perfect, refreshing escape for when your family complains about Millennial entitlement, demands to know why you’re still single, or says something like: “These kids today are so busy Tinderbooking, they don’t know the value of a good handshake!”

A Tall OPD (that’s a “small” for those of you who live under a rock) costs between $3.85 and $4.05, though that price goes up significantly if you want to pair your ombre drink with ombre hair, ombre nails, and ombre lipstick. The creamy, tropical drink has enough caffeine to give you a mid-day boost, and since it provides 120 percent of the Vitamin C you need in a day, it’s essentially the same as eating a salad.

So go forth and taste the Millennial Dream, my friends. It'll be around for a while.