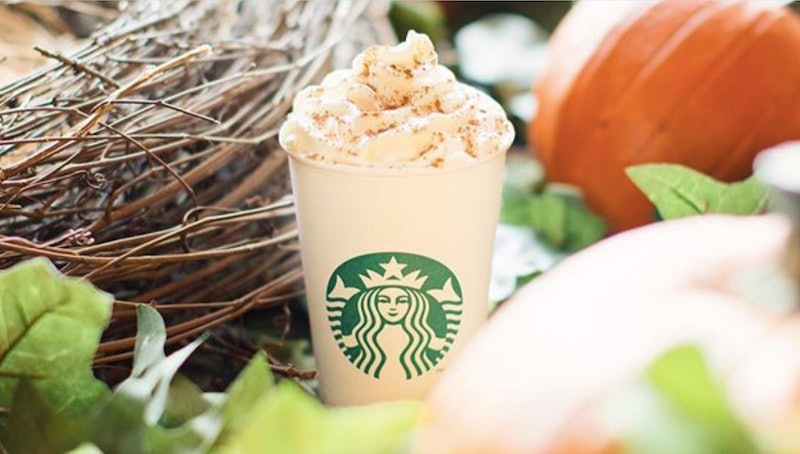 In the coffee world, fall means one thing and one thing only: PUMPKIN. SPICE. LATTES. The cult favorite has become perhaps Starbucks' most iconic drink. The Pumpkin Spice Latte (or PSL) is no longer just an autumnal sip; the PSL is a lifestyle. The only downside of the drink is its restrictive availability. The PSL is only available at Starbucks during the fall season. Since Starbucks announced that the PSL will be available on August 28 this year, you may be already be wondering how long the Starbucks Pumpkin Spice Latte will be available in 2018. The window may surprise you, depending on how long you think "pumpkin season" should or shouldn't last.

This year, the PSL will be keeping your heart and hands warms through the beginning of the winter season. Holiday shopping can be a drag when temperatures are low, but the addition of a simple spicy bev can make all the difference. The ~official~ timeline for the PSL in 2018 starts on August 28 this year — but while the drink will definitely be available through October and likely November, there is no definitive "end date" for the offering. In the past, Pumpkin Spice Lattes have typically stopped being available before Christmas, although the availability may vary from store to store depending on how long supplies for it last. For what it's worth, the official Pumpkin Spice Latte Twitter stopped being active on Halloween last year, seeming to indicate that Starbucks might stop actively promoting it around that time.

In the 15 years since its debut in 2003, the evolution of the PSL from drink to icon has been legendary. The exploding popularity of Instagram and Twitter led to the development of the PSL hashtag (and the use of the abbreviation, in general), the official Twitter account, and even its own Instagram. It even inspired the creation of this year's Leaf Rakers Society, a Facebook group devoted to all things fall (and, of course, the PSL itself).

The success of the Pumpkin Spice Latte is likely to credit for the release of any number of pumpkin spice products in the past decade, and this year's line up of them is no exception. Even Starbucks itself has expanded its Pumpkin Spice offerings into grocery stores — this year will include K-Cups, cold beverages, and Pumpkin Spice Cookie Straws, all of which have already hit shelves for August 2018. Although it comes before fall each year, for many, the Pumpkin Spice Latte's availability officially marks the beginning of the best season. Because at the end of the day, the success of the PSL truly lies in one thing: a love of fall. (And likely a strong sweet tooth to boot.)

So if anyone tries to give you flack for enjoying a PSL early in the season — or heck, enjoying one at all — remember that there's a reason it's the most popular seasonal drink at Starbucks. Drink up while you can, Halloweenies — something this delicious isn't made to last.