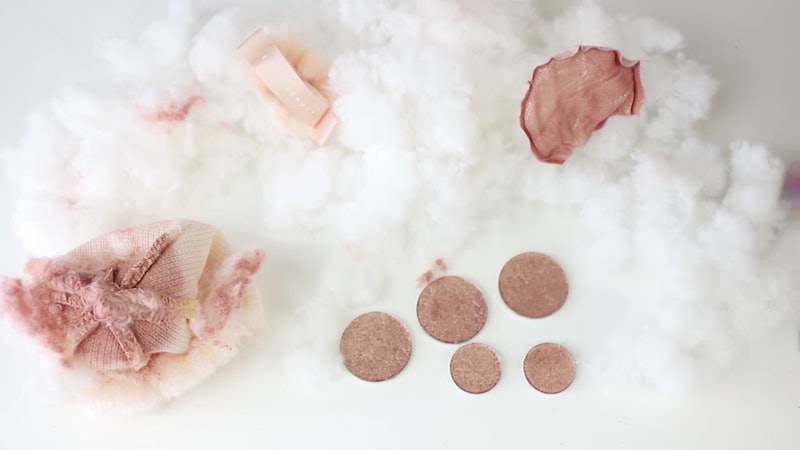 While everyone may be collectively freaking out about Savage x Fenty and the amazing teasers Rihanna has released, let's not forget that Rihanna also recently dropped some incredible new summertime Fenty Beauty products. While Body Lava is all the rage, Fenty Beauty's Fairy Bomb isn't anything to balk at. In fact, it may be an even better product than it seems (and it already seems pretty great). Two YouTubers completely destroyed Rihanna's new release, but before your blood pressure starts rising at the thought, you should probably hear more about the experiment.

Youtubers from channel Beauty News are pros at destroying makeup, but as they destroy Fenty's Fairy Bomb Pom Pom, they're not just doing it for the satisfaction of cutting open an adorable, stuffed pom. They're curious about the product inside. While the vast majority of the pom pom turns out to be made of stuffing (though it's doubtful anyone is shocked by such a development), there's a small pouch inside that's filled with a glittering highlighter.

Once the pouch is reached, it's clear that Rihanna and Fenty Beauty may just be the queens of getting you that glow. While the pair at Beauty News weren't loving the pom pom on its own, once they were able to swatch the product inside, it was love at first sight.

As it turns, Fairy Bomb is actually bigger than you're thinking. Once the women cut through the product, they find a pouch filled with product at the bottom. While the advertised about of product is 10.5g, it turns out that this Fairy Bomb was actually home to 12.11g of highlighter. The women even measured the product inside the pouch, emptied it out of said pouch, and weighed the pouch again to get an accurate measurement. Basically Rihanna is officially giving you more than she even advertised. Bless you, Rihanna.

If that weren't enough, the product found inside also happens to be absolutely stunning. If you've ever seen Fenty Beauty's Ginger Binge and Moscow Mule Killawatt highlighting duo, the product inside looks like a gorgeous loose version. Once it hits the hosts' fingers, they're blown away by how stunning the highlighter inside Fairy Bomb actually is.

To see just how the highlighter inside Fairy Bomb performs, the pair decide to press the loose powder into pans to form a true pressed powder highlight a la Rihanna's Killawat pans. While the product inside Fairy Bomb doesn't press as well as they'd hoped due to a lack of a better binding agent, the homemade pressed pans still result in a next level gorgeous shade of highlight.

Look at that gorgeous swatch!

Even after a few days, when the pressed pans have begun to break up, the product still looks beautiful on the skin with a little bit of work.

As for how people felt about seeing the product destroyed? Some were a little heartbroken at watching a product that retails for $42 in the United States be cut open.

However, once people began to see the product inside and how it performed outside of the pom pom, they appeared to get on board with the destruction.

In fact, some fans now seem to want the Fairy Bomb pom pom turned into a real highlighter.

People seem truly impressed by how gorgeous the powder inside really is.

Only time will tell if Rihanna and Fenty Beauty get wind of the video, but given that it's reached over 1 million views, they just may. Whether you hate the destruction of the product or found it totally enthralling, there's no doubt now that inside Fairy Bomb, you'll find a gorgeous highlighter, and isn't that what everyone is after?