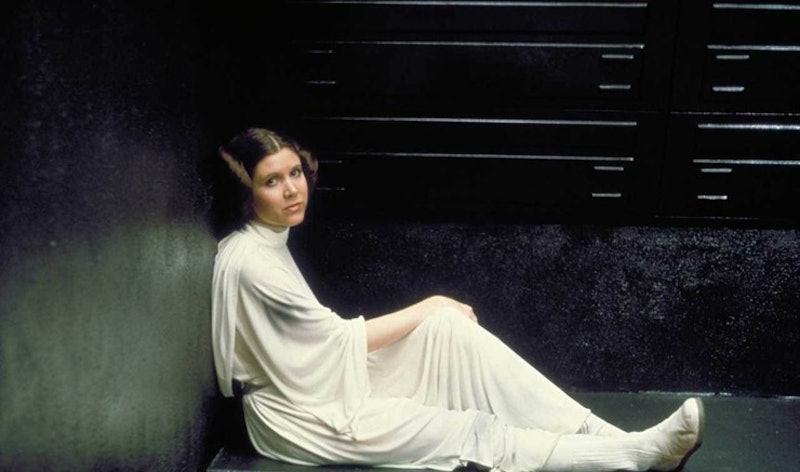 The incredibly sad news broke on Tuesday that the legendary Carrie Fisher has passed away at the age of 60 after suffering a major heart attack a few days earlier While Fisher was an incredible writer, having written a number books and doctored many screenplays, her legacy will no doubt be attached to her acting career, specifically her role as Princess Leia in the Star Wars movies. With the actor gone, and a new era of female-empowerment within the Star Wars world emerging, it's clear now just how much the character of Leia broke the princess mold, and how much Fisher embodied that rebellion.

For a long time, Princess Leia was viewed as kind of a damsel in the Star Wars universe. Her kidnapping, rescue, sexualization, and the tendency of male fans to put her on a princess pedestal made people forget just how strong and outspoken Leia was. But looking back on the first three films of the Star Wars trilogy, it's clear that Leia was just as amazing as Rey of The Force Awakens or Jyn of this year's Rogue One. In fact, Leia set the precedent for those ladies, and defied what many though of as "princess" behavior more times than I can count.

For one thing, it was essentially Princess Leia's actions that began Star Wars. When we first met her in Episode IV: A New Hope, she had just taken on an incredibly risky task: hiding the stolen Death Star plans inside R2-D2. The move was brave, dangerous, and though fans didn't really realize it at first, solidified Leia as one of the most key players in the Star Wars saga. She was not the type of princess to wait around and let the rebellion happen around her, and while her defiant actions at the start of A New Hope resulted in her imprisonment, she spent the rest of the film being anything but a prisoner. Leia wittily insulted her captors, and when her rescuers, Luke Skywalker and Han Solo, weren't doing things her way, she spoke out, loudly, against their haphazard plans. Later, when it looked like their heroism wasn't getting the job done, she grabbed a blaster and fired at the Stormtroopers herself.

In this galaxy far, far away, being a princess meant being a cunning politician, a soldier who can fix a junky space ship, and an intelligent planner. In 1977, there hadn't really been a "princess" character who could take on these feats on-screen. Leia's heroism continued in The Empire Strikes Back and Return of the Jedi, whether she was acting as the boss or turning the tables on a nasty foe. Fans will remember the gold bikini slave outfit that Jabba the Hut forced Leia to wear in Jedi. It was a moment that's cited for its sexism and catering to male fantasies. But let's not forget that Leia murders her captor with the very chains that kept her prisoner and that Fisher herself called the moment a powerful one where Leia took revenge against her enslaver. Maybe other princesses would've waited around for Luke or Han to get to rescuing them, but Leia did not.

And Leia's legacy as not-your-typical princess continued in last year's Episode VII: The Force Awakens. No longer referred to as princess, General Organa maintained her role as a leader of the rebellion for 30-plus years, despite a number of reasons to give up. She had lost the love of her life, her planet, her family, and even her own child to the dark side. It's amazing that Leia had the strength to continue the fight, and even more that she remained a steadfast element of hope. Her symbol as such even (spoiler alert!) continued into the franchise's first anthology film, Rogue One. Soon, Leia will return in the upcoming Episode VIII (Fisher had reportedly finished filming her scenes before her death), where she will no doubt continue to lead the fight against The First Order, inspiring both Rey and female fans everywhere.

Now that Fisher is gone, I'm not sure what lies ahead for Leia, one of the most badass, smart, outspoken heroines we've ever seen in sci-fi. Whether she'll play a part in Episode IX in any way, be through unused footage Fisher has already filmed, CGI, or another way means remains to be seen. But Leia's legacy will live on within and outside of the film franchise. And fans have the amazing, brazen, brave, outspoken Fisher to thank for bringing her to life.