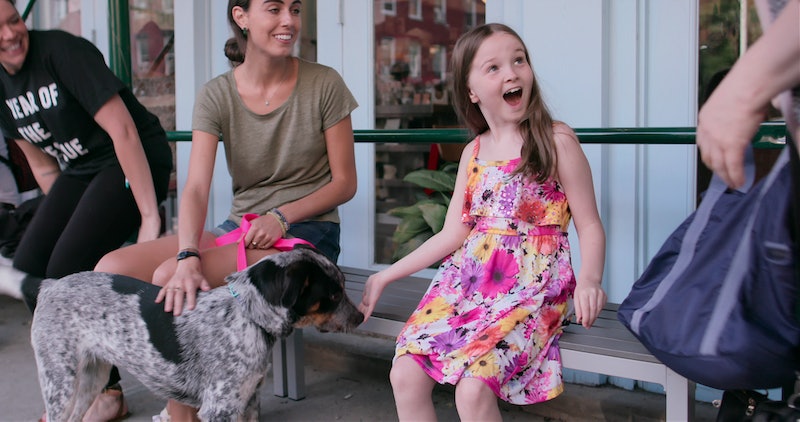 To anyone who's cried while watching videos about rescued pit bulls finding forever homes, gasped at a chubby corgi lumbering down the sidewalk, or melted into a puddle upon seeing a dog in a Halloween costume — Netflix's new series, Dogs, is for you. The six-episode docuseries, which premiered Friday, Nov. 16 on the streaming giant, features a variety of stories from dog owners, dog enthusiasts, and dogs from around the world. And while the number of subjects varies from episode to episode, at the heart of each story is a heartwarming bond between humans and their furry friends. However, as Dogs creator Glen Zipper and executive producer Amy Berg tell Bustle, it took a lot of work to walk that fine line between sad and uplifting, and there was a lot of care and consideration behind-the-scenes to whittle down their prospective subjects to fit into a mere six episodes.

During the course of the series, audiences will watch stories set in Berlin, Syria, Italy, Tokyo, Costa Rica, and the U.S. For that reason, it took about four or five months to cast and scout everything, according to the collaborators. "We were very fortunate to have an amazing casting team — a company called Aberrant Creative that's run by Francine Dauw and Matt Shelly," Zipper explains. "And they brought us back more stories than we could count. At some point we had it boiled down to about 30 or 40, and then from there obviously we had to winnow it down even more significantly to get to six."

But how in the world did they narrow their search when there were so many good pooches to choose from? "We had certain criteria that we were looking for," Zipper explains. "First and foremost, we wanted to have stories that were anchored on the bond between human beings and dogs. So while there were a lot of stories about remarkable dogs doing remarkable things, sometimes funny things — a skateboarding dog, a paragliding dog — those were stories we put to one side so we could focus on stories that were bond-centric."

However, just a sweet story about an owner and their dog doesn't necessarily make a compelling documentary subject, however adorable and hilarious they might be. For that reason, they needed to narrow down the pool even further. "[W]e wanted diversity — both geographic diversity, so we could speak to how the love for dogs knows no borders — and then also diversity of characters," Zipper continues. "Characters from different cultures and different races with different perspectives, but all with one love that applied to dogs."

Their hard work paid off: Audiences will clutch their hearts upon meeting Zeus — the talkative husky stuck in war-torn Syria while his owner, Ayham, is thousands of miles away in Berlin. Then there's Ice, who watches over a remote Italian village on the shores of Lake Como. The lab sits at the dining room table like one of the family, patrols the windy vicoli of the hilltown, greeting the estimated 40 people that live there year round, and helps his owner catch fish to supply the family's restaurant. Another pup, Rory, helps her young owner, Corrine, manage her epilepsy. And then there is the overwhelming Territorio de Zaguates — the overrun dog rescue in Costa Rica that houses over 1,000 pooches who have nowhere else to go.

"Our relationship with dogs isn’t complicated. It's pure love, and they're perfect creatures and perfect souls."

"The most difficult story to find was probably Costa Rica," Berg says of this episode. "We were so drawn to the images of twelve hundred dogs running together but had no idea what that would look like in actuality." The end result is a nuanced portrayal of a difficult situation — it's clear that the owners are passionate about their rescue but lack the infrastructure and funds to stay afloat. However, the episode does have a somewhat happy ending. Zipper discloses that one of the episode's directors, T.J. Martin, adopted a rescue from Territorio. "That dog is now happily living in Los Angeles and being spoiled by him on a daily basis," the Dogs creator says.

Speaking of rescues, I ask Berg and Zipper if they were as eager to adopt a dog from Hearts & Bones, the rescue featured in Episode 6, as I was. They respond that they were but had the self-control to stop themselves. That said, the two are already enthusiastic dog owners; Berg owns a 2-year-old Cavalier Poodle named Lenny while Zipper speaks fondly of his pit bull rescue, Anthony. Who better to create a docuseries about dogs than two canine enthusiasts? "We have people, human beings that are important parts of our families, but those relationships are always complicated," Zipper says. "Our relationship with dogs isn’t complicated. It's pure love, and they're perfect creatures and perfect souls."

So since they're enthusiastic dog lovers, which documentary subjects were their favorites? Berg has two: Ice and Zeus. "I love Zeus," she gushes. (Berg, it should be noted directed both "Bravo, Zeus" and "Second Chances.") "I wanted to take him home with me. I remember when we went into this café — and he’s huge — and he just lay down on the floor, and all these people would just stare at him and step over him, and he was completely unaffected. He's the dog that you walk down the street with, and everyone needs to take a selfie with him. He's just got such a great personality."

While Zipper agrees that Rory, Ice, and Zeus are the three "hero dogs" from the series, the creator prefers Max, whom he jokingly refers to as his "underdog" and "favorite, best-supporting dog." Indeed, Zipper's pit bull rescue is a big reason he has a soft spot for dogs like Max. "At some point, I will be adding more dogs to my pack, and I think I'll probably gravitate to the dogs that are passed over and really do need that second chance," he says.

In fact, Zipper says that he's in a constant state of wanting more rescues. "For me, my life is basically two things: I’m telling stories in film and TV and resisting the urge to adopt dogs," Zipper jokes. "So it’s a constant struggle every day — day in and day out. I would need my own Territorio de Zaguates to realize my full ambition for adopting dogs."

Fortunately, many Dogs viewers probably feel the same way as Zipper does — especially after getting to Episode 6. It's hard work trying to pick just a handful of doggos to feature in such a moving docuseries, but someone has to do it. Hopefully, they'll be up to creating more episodes in the future, since this is the sort of content the world needs these days.

More like this
‘Squid Game’ Creator Hwang Dong-Hyuk Just Dropped A Major Season 2 Tease
By Brian Anthony Hernandez and Bustle Editors
Nicola Coughlan Shared A Lady Whistledown Excerpt From ‘Bridgerton’ Season 3
By Grace Wehniainen, Alyssa Lapid and Sam Ramsden
Devi Is Going To Meet A “Smoldering Bad Boy” In ‘Never Have I Ever’ Season 4
By Jack Irvin and Gabrielle Bondi
New ‘Lupin’ Part 3 Teaser Hints That Assane Will “Go Out In Style”
By Brad Witter
Get Even More From Bustle — Sign Up For The Newsletter