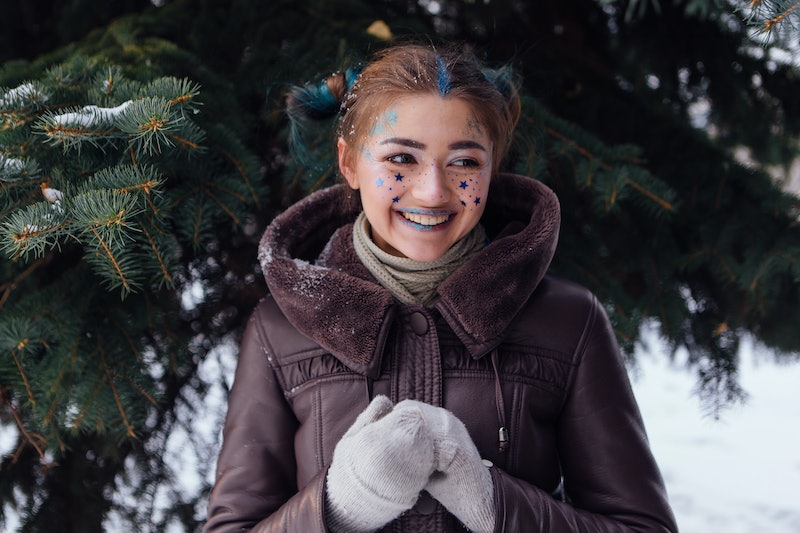 Prepare for the skies to go dark for the November 2019 new moon, which takes place on Tuesday, Nov. 26 in Sagittarius. Just days prior to this luminary, the sun will have also moved into Sagittarius, making the Sag energy even stronger. As a fire sign with a free-spirited and spontaneous energy, this vibe will motivate us to look at our goals optimistically and expand our horizons — but it's also bringing some chaotic energy with it. You'll definitely want to get in the know about how the November 2019 new moon will affect your zodiac sign — because while this new moon brings an opportunity to plant new seeds, it could also be a rocky roller coaster ride.

Thanks to an intense opposition between quick-shootin' Mars and unpredictable Uranus (an aspect described as "one of the most disruptive influences in astrology" by Astrology King) taking place alongside this luminary, we can expect yet another intense new moon, following in the footsteps of the last. In fact, Mars will be in the exact same degree of Scorpio, opposite Uranus, that the October 2019 new moon was at a month ago — meaning it will reinvigorate the same sort of intensity, except with an added dose of Mars' patented fiery rage.

That said, new moons mark the start of a new moon cycle, and that means an opportunity for fresh starts and new projects. There are certainly ways to work with this energy and prepare for its intense effect. According to Astrology King, going with the flow and adapting to changes will be key. "If you resist change, become arrogant or disruptive, you will suffer losses or miss out on an important opportunity," Astrology King wrote about the November 2019 new moon. "You don’t need to totally change direction but rather make minor changes or alterations." Use this luminary to adjust your path — with Mercury finally direct, you'll be able to better implement the changes you want to see materialize.

Bustle chatted with astrologer Lisa Stardust who helped give us the lowdown on what each zodiac sign can expect from the November 2019 new moon. Read on to find out what's in store for your sign.

With the sun and moon in a fellow fire sign, you're going to feel all the more convicted in your spiritual beliefs. "Higher minded ideals will allow you to evoke your inner righteous vibe," explains Stardust. "Just don’t be too judgey." Remember that your opinions are opinions, not facts, Aries — resist the urge to start conflict for fun.

The chaotic energy of the new moon will have everyone feeling edgy (and subsequently put many of us on the defense). Prepare yourself now so you're not lashing out desperately in self-preservation. "Set limits now before others step all over you," advises Stardust. Boundaries are more important now than ever, Taurus, so practice them.

With potential arguments breaking out left and right under this luminary, you may want to limit your interactions to those who are less likely to stir the pot. "Make sure you are aware of who you can trust now," warns Stardust. "Don’t believe all you hear!" Irritability can cause people to say things and act in ways they wouldn't normally. Approach all things now with a grain of salt, Gem.

You're smart, Cancer, in that you're willing to say "no, thanks" to the new moon drama that has potential to unfold. "You’re focused on resting your bones and unwinding," shares Stardust. "Don’t let anything stand in your way of self-care." Prioritize bubble baths, your phone's DND mode, and pampering yourself silly to make the most of this luminary.

Fire sign energy is all around, with both the sun and moon in your element's territory — so while things in your love life are pretty dreamy at the moment, be careful to not let things get out of control. "Love is in the air, but only if you set boundaries with your boo," advises Stardust. Everyone has potential to snap under this luminary, so prepare to avoid it.

New moon drama? Not for this Virgo queen. "Redecorating your pad is key," says Stardust. "Hygge your space for the cozy season." Avoid the social scene in favor of making your living space the sweet n' sensual sanctuary you deserve. Warm the place up with candles, fuzzy blankets, and a few notches up on the heater to embrace this fire-ruled luminary.

You can speak things into reality right now, Libra — and being the chatty air sign that you are, you'll want to make sure you're speaking from the heart as this new moon rises. "Your words are powerful," warns Stardust. "Choose them wisely!" No sugarcoating, no white lies. Speak your truth and you'll open up new pathways of honesty, power, and opportunity.

Money is most definitely on your mind as this new moon reaches its peak, and that's great — focus your energy on yourself and looking at your current financial sitch. "Revamping your money and creating a budget will elevate you to baller status soon," shares Stardust. Mercury retrograde in your sign has finally ended, so now's a time to make moves.

Happy season of you, dear Sagittarius! This is your new moon, so embrace the chaos and be your unabashed self. "You’re in the limelight now," explains Stardust. "All eyes are on you, which is a good thing!" Bask in the glow of the sun shining in your sign, and trust that your spontaneity and optimism will carry you over this luminary with grace.

Don't burn yourself into the ground, Cap. This new moon has the potential to make all of us irritable, but with how hard you've been at your grind, it's almost a guarantee for you. "Take time off and relax," advises Stardust. "After all, you need a break." Use the dark moon as a get-out-of-responsibilities-free token and spend the night in with yourself.

Although this new moon brings potential for drama and unpredictability, you're going to be all the more conscious of the grounding force that is your close circle of friends right now. "Your friends may prove to be extra worthy of your love now," says Stardust. Honor the luminary by connecting with the people you trust the most.

Something you've been working toward career-wise should be coming to a happy precipice — so open yourself up to the potentially good news. "A raise is on its way now," shares Stardust. "Be prepared for news of a promotion." While this new moon bring edgy moods, it's also a time for new beginnings, so look forward to the changes that are to come for you.