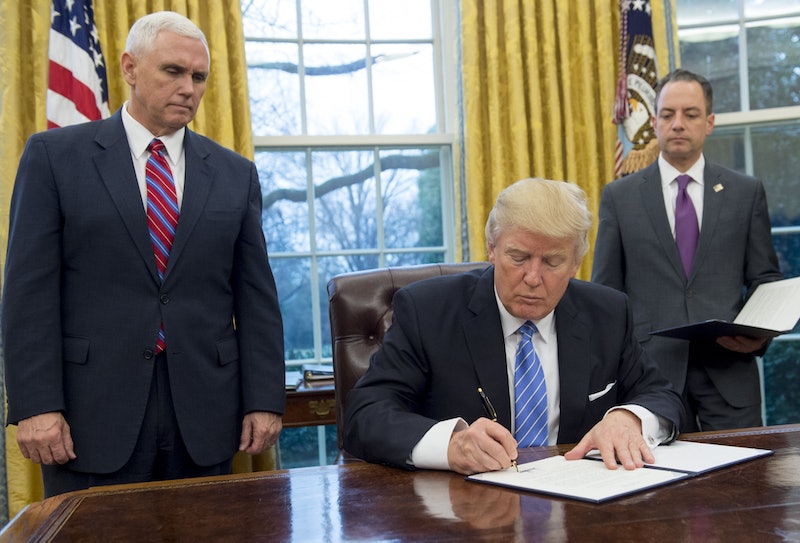 On Monday January 23, one day after the 44th anniversary of Roe v. Wade, Donald Trump took his first official step in taking reproductive rights away from women and signed an executive order that would block funding and foreign aid to any international nongovernmental organizations that provide abortion services to women seeking them or those that even offer abortion as an option to unwanted pregnancies. The Global Gag Rule, as it was dubbed (because that's exactly what it is), was first established in 1984 by then Republican president, Ronald Reagan; when Barack Obama took office, he rescinded the policy in 2009.

But the problem extends far deeper than access to abortions. It also means that these organizations who offer so much more than abortion, for example, sexual health education, regular STI screenings, and all other sexual health related services, will be denied funding simply because they offer abortion as a choice. This will have catastrophic results on so many levels.

"It is beyond comprehension that after women marched in the streets in more than 600 cities across the U.S. and the world this administration chose to reinstate the Global Gag Rule on one of its first days in office, forcing health care providers working in developing countries to choose between receiving U.S. global health assistance and providing comprehensive sexual and reproductive health care," Debra Hauser, President of Advocates for Youth, tells Bustle. "The Global Gag rule signed by Mr. Trump [on January 23] extends the impact of the Global Gag Rule to prohibit not only organizations that receive U.S. family planning funding from providing, educating about or referring for abortion services EVEN with funding from sources other than the U.S. government, but also effects those organizations receiving other global health assistance such as PEPFAR funds used for the prevention, treatment and care of HIV and AIDS. Providers must agree to not provide legal abortion services, information or referrals with their own money in order to receive U.S. global health funding. This will have an enormous impact on these providers and the women they serve, leaving too many and especially those living in poverty and those with limited access to other health providers, with little access to information, counseling, referrals, or services related to abortion care. Many will be left to fend for themselves and will turn to unsafe methods to terminate their pregnancies." How scary is that?

"Each and every day, 830 women die from pregnancy or childbirth-related complications," Hauser says. "Most live in developing or low-income countries where this policy takes effect. In fact, in low income countries complications from pregnancy and childbirth-related causes, including unsafe abortion are one of the leading causes of death for young women ages 15-19. Each year at least two million women undergo unsafe abortions and tens of thousands die from them. United States policies such as the Global Gag Rule are complicit in these deaths. This policy forces health care providers to withhold lifesaving information and services women need to make safe and informed decisions about the size and timing of their families. Those faced with an unwanted pregnancy that cannot see their way to having another child will turn to unsafe methods to terminate their pregnancies, ultimately putting their own health and lives in grave danger."

Between Trump's statement in March 2016 that women should receive “punishment” for getting an abortion, the mission to defund Planned Parenthood, and Monday’s decision to reinstate the Global Gag Rule, Trump’s previous claim that “Nobody has more respect for women than I do,” is just another falsehood, in a long series of falsehoods — I mean “alternative facts” — that Trump has spewed over the past several months.

"If you think 'that’s not me, why should I care?' — imagine a world where 225 million women in developing nations do not have control over their bodies."

So what do we do about the detrimental fallout of Trump reinstating the Global Gag Rule? Here's how we can help the women who will be affected by it most, according to Hauser and International Youth Leadership Council member, Liliana Ascencio.

More like this
Bumble's "Compliments" Feature Lets You Message Before You Match
By Lexi Inks
Here's How To Support Jewish People Amid Rising Antisemitism
By Hannah Orenstein
Prince William Condemns “Unacceptable” Comments Made To A Black Guest At Buckingham Palace
By Shahed Ezaydi
Are Capricorn & Aquarius Compatible In A Relationship? Astrologers Weigh In
By Kristine Fellizar
Get Even More From Bustle — Sign Up For The Newsletter