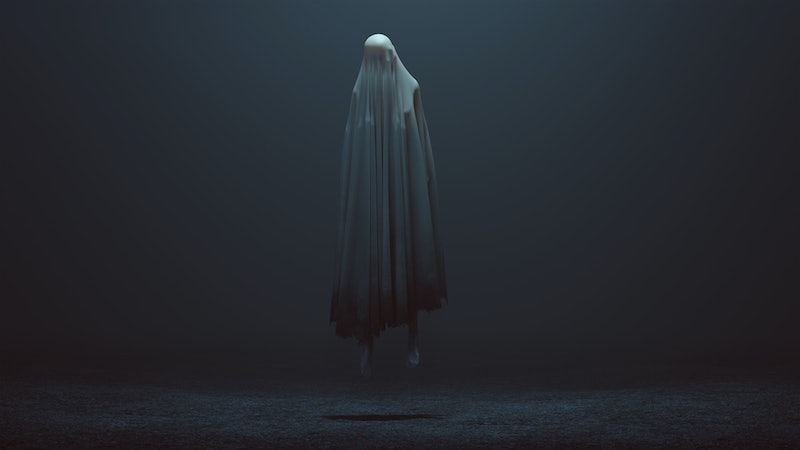 Pretty much everything about ghosts and haunted houses is totally thrilling — you know, when it's happening to someone else. But when it's your basement that's suddenly filled with cold spots? Your cozy evening at home that's disrupted by shadowy figures? Your extremely valuable Pinchers the Lobster Beanie Baby that is getting knocked off the mantel every day while you're out at work? Yeah, that's significantly less fun than reading the latest Dear David dispatch from the safety of your couch/ bed/ toilet.

"Fear of the unexplained or unknown is a basic and instinctual defense mechanism," Trey Hudson, of Alabama's Oxford Paranormal Society, tells Bustle. "Needless to say, haunting events can be extremely un-nerving and can cause quite a bit of psychological stress on individuals and families." But while people in haunted house movies usually see no options besides fleeing their homes or welcoming a bent-neck lady into their family, in real life, folks who are worried that they have some unauthorized houseguests (ahem) can call paranormal investigation groups — who seek to help the haunted get a handle on their situation, figure out what to do next, and rule out non-supernatural reasons your house is bumping in the night.

Read on to learn more about what to do if you think your house is haunted — but if your computer starts gently floating away while you're reading, uh, maybe just go spend the night at your parents'.

A 2017 YouGov poll revealed that 28 percent of Americans believe they've been in the presence of a ghost. While there aren't any stats on how many of those people saw the ghost in their own house, it stands to figure that a few hundred thousand of us live in haunted spaces.

But how exactly do people come to realize that their house is haunted? Sure, some might have full-on seen an apparition while standing around in their underwear, microwaving a French bread pizza, but according to Hudson, most signs that a place is haunted are small: "items moving a few centimeters overnight, sounds, movement in the corner of your vision or a general feeling of dread or oppression." Michael Cardinuto, founder and lead investigator at Long Island Paranormal Investigators, tells Bustle that in many of the cases he has worked on, folks who contacted his organization about hauntings reported feeling cold spots or seeing shadow people.

However, just because you felt a sense of gloom — or even saw the shade of a 19th century gold miner doing the Macarena around your bed late at night — doesn't mean your house is haunted. Both Cardinuto and Hudson have observed that sensitivity to electromagnetic frequency can often make people mistakenly believe that their home is haunted; Cardinuto tells Bustle, "High EMF fields in a home can cause feelings of being watched, nightmares, and even hallucinations." Luckily, there is a very simple solution: start using the alarm on your phone instead of an alarm clock. "We have noticed that most alarm clocks give off a high reading of EMF," says Cardinuto, "and when you remove the alarm clock from where you are sleeping, the activity goes away."

Carbon monoxide leaks can also cause people to hear unexplained sounds, hallucinate, and feel of dread, so make sure to grab a carbon monoxide detector and check your home's levels before you jump on Reddit to talk about the eerie feeling you keep getting in the shower.

So you've checked for carbon monoxide leaks, made note of whether your house is located under a power line, and thrown all your alarm clocks, hair dryers, and other appliances that emit electromagnetic frequencies down the basement stairs. But you still feel like somebody's watching you. The next step, says Cardinuto, is to create "a log of what is happening, where in the home it is occurring and the time it is taking place, along with witnesses and who is being affected." Hudson notes that you can then "use this information to establish patterns that might point to a mundane, non-supernatural explanation or could show some actual activity."

The idea of having, you know, AN UNEARTHLY SPIRIT JUST WANDERING THE HALLS OF YOUR HOME is pretty damned freaky. But as Hudson explains, that probably doesn't mean you're in any sort of danger. There's no need to "give in to fear and assume the happening is malevolent," says Hudson. "Many, many hauntings are merely residual emotional energy imprinted on a geographical location by an emotional or stressful event."

In residual hauntings, Hudson explains, you're not interacting with an entity; rather, you're merely witnessing actions from the past being replayed in your home on a loop. But even if your haunting isn't residual, there isn't necessarily a reason to be scared — "entities are just like us," says Hudson, "mostly neither completely good nor bad."

"Mostly" might be the operative word there. Though he's found them to be rare in his own work, Hudson notes that "demonic occurrences ... are rather difficult and can feign helpfulness in order to lead people astray, ruin or into self-harm." Cardunito concurs, saying that, "If there is a Demonic, Djinn, or Elemental type of haunting, these are the worst kinds to deal with," and that these types of hauntings "could lead to physical and mental attacks."

But still, don't get too nervous. ""In my years of investigating," says Hudson, "I have never been harmed or injured on an investigation."

4. Don't Bust Out the Ouija Board

You've taken your notes, checked for other causes, and yep, there's definitely something in your house that shouldn't be there. The logical next step is to whip out the Ouija board and try to ask it to leave, right?

NO, DON'T DO THAT! Cardunito cautions that "the one thing people shouldn't do it to provoke what is there," which includes using a Ouija or otherwise trying to summon it. "If you have a regular spirit in your home and you start to use a Ouija board to talk to it, you can open up a doorway and something else may come in."

Once you've established that, yes, you think there's a ghostly presence in your house, and yes, it is making you feel about 40,000 different kinds of unnerved, you might want to call in your local paranormal group. These groups — which are usually nonprofits, and may take donations but should not request any form of payment for their work — spend time observing your home, ruling out non-paranormal factors, and if they find something strange in your neighborhood, giving you some advice about how to go forward.

The process of having your home investigated will usually take between four and eight hours, depending on the group and case, and will usually involve audio, video, and electronic recording equipment; group members will focus in on areas of the house where activity has been reported, possibly recording video and audio and using additional equipment like a "ghost box."

There's also often prep work done ahead of time — as Hudson explains, his team does "research on the property using historical records and news accounts of activity in the area" to help "determine if the site has a history of events or happenings that might help to explain the reason for the occasions of high strangeness."

The end result is something closer a documentary crew making a movie about your house that anything you've seen in, say, The Conjuring — Hudson describes investigations as "a purposeful and methodical process". After they leave, Hudson says, the group will "look at video, audio recordings and other information/data collected" looking for evidence of a haunting.

After their observation, the paranormal investigators will examine all the recordings they made and data they collected. However, don't expect them to return armed with proton packs — or even a definite conclusion about what is making your floorboards creak eerily in the night.

"When we go into someone's home, we are there for a short period of time and the chances of capturing something are slim," says Cardinuto. Hudson reports that, in his experience, only 10 percent of cases actually show clear evidence of haunting. "We do our best to determine if the supernatural 'events' are, in fact, a misunderstanding of everyday occurrences and thus have a logical explanation," says Hudson. But sometimes, clear results aren't easy to come by: "We always do a follow up investigation to see if we can find something. Sometimes it takes a few ties for whatever is there to come out."

7. Return to a Ghost-Free Life (Hopefully)

And if the team does find something? Different teams take different tactics. Hudson's team will "contact the home owner and give them our findings, conclusions and recommendations," while Cardinuto says, "We can help spirits move on by doing a spiritual or religious cleansing that usually works about 90 percent of the time ... When doing a cleansing the science goes out the window and the spiritual part takes over."

And if the spirits ... you know, don't wanna leave? "The other 10 percent," says Cardinuto, "we just keep trying." Or, you might just decide that you don't mind living with some ghosts. Seems like it worked out alright for those Haunting of Hill House people!

More like this
26 Ghost Story Podcasts To Get You Ready For Halloween
By Jessica Booth, Mia Mercado, JR Thorpe and Emma Carey
These 25 International Horror Movies On Netflix Prove Fear Is A Universal Language
By Bustle Editors
15 Easy Pranks To Play This Halloween
By Emily Kelley and Lauren Grant
You Can Stay At The 'Hocus Pocus' House On Airbnb
By Alexis Morillo
Get Even More From Bustle — Sign Up For The Newsletter