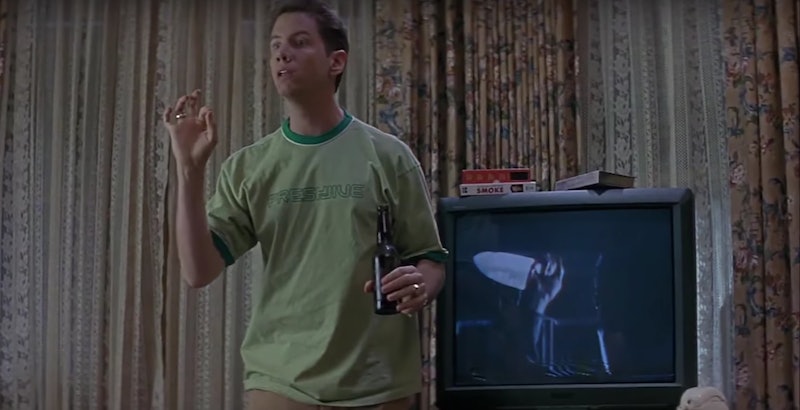 Do you like scary movies? So much so you that would be interested to find out how you can stay in the Scream party house the weekend before Halloween? Look no further than Scream Comes Home. As TMZ reported on Tuesday, July 24, horror aficionados Anthony Masi and Nate Ragon have put together a Scream extravaganza for the ages. Starting Oct. 27 at the home in Santa Rosa, Calif., where Stu Macher hosted his killer party, fans of Wes Craven’s 1996 slasher classic can, as the site for the get-together promises, attend a “once-in-a-lifetime gathering at the actual house used in Scream’s iconic showdown ending.”

Oh, but it's not just a party. It's also a chance to watch the movie while staring at one of the film's locations. As Ragon said in the Kickstarter clip, there will be a screening of Scream "in the lawn right beside Stu's house." Sounds Stu-pendous.

Masi and Ragon told TMZ they spent $22,000 to rent out the Santa Rosa house for that weekend, and the barns on the property will be transformed into a Scream memorabilia exhibit. The Kickstarter created for the event has exceeded its fundraising goal, and practically every level of overnight ticket has already sold out. That's cool for the event, but kind of a bummer for everyone who would like to go but missed out on most of the overnight pass options.

Before you go wallow around in sadness and corn syrup, know that there are still a few Scream-tastic options up for grabs. As far as staying the night at Stu Macher's place goes, there is one category that has yet to sell out: the Friday Night VIP Experience. For a cool $1,750, you and one other person can sleep in the Scream house. This package also includes food, giveaways, and a “super-cool Scream surprise.” And if shelling out nearly two grand for VIP overnight tickets is not in the cards, there are a few different levels of day pass still available, too. The remaining day pass prices start at $50 and go up to $400.

The site is also selling Ghost Face plastic cups, a T-shirt inspired by the tee the cast and crew wore after they filmed the 21-day shoot at the house, props, and a phone call from Ghost Face. For $125, Roger L. Jackson, the voice actor who provided the voice for Ghost Face in every Scream movie, will give you a ring.

If you do go to Stu's house on Oct. 27, remember: Stay out of the garage. Do not be duped by corn syrup. And never, ever say "I'll be right back."