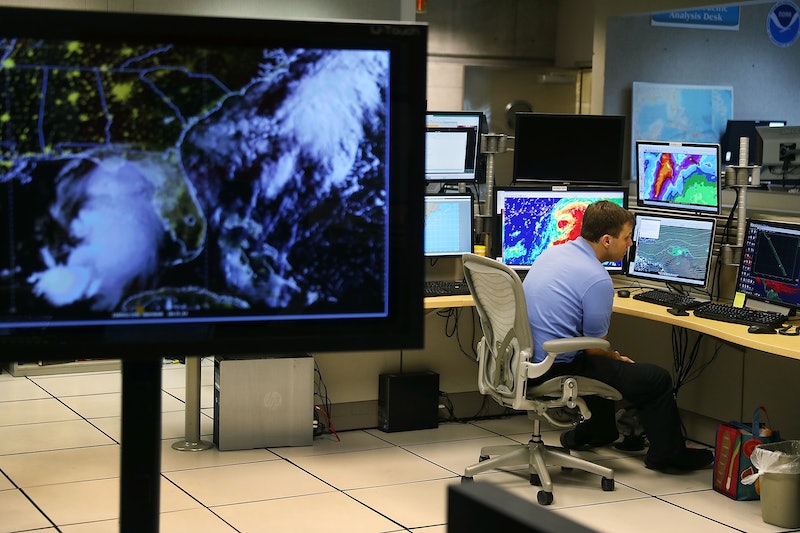 If you've looked at literally any form of the news over the past couple of days, you've probably heard that there's a hurricane coming towards the Texas coast, likely to make landfall this weekend. And if you're anywhere need the area, you desperately need to know how to track Hurricane Harvey — because you really don't want to be caught anywhere where its effects might be felt.

A good thing to bookmark for this and and any future hurricanes is the National Hurricane Center website run out of the National Oceanic and Atmospheric Administration. They always have a map of the Atlantic that shows you any storms that might be forming, and then you can click on the icon representing Hurricane Harvey to get specific information on where it's most likely going to hit. They're the ones issuing warnings and classifying the storms, so if you want up to date, accurate information, this is the place to go first.

Any of your favorite weather websites will also most likely have Hurricane Harvey trackers, which will also show you the areas where the storm is likely to have its biggest effect. A key thing to remember while looking at these trackers, though, is that while they make every effort to be as accurate as possible, they're not always able to predict exactly what the storm is going to do or where it's going to do. If you're anywhere in the broader area where the storm is projected to come, the smartest thing to do is to head somewhere safe.

At this point, it looks like Hurricane Harvey will be the first hurricane to hit Texas since 2008. While the Texas coastline is expected to take the brunt of the storm, there might also be heavy rain in Louisiana. Houston is likely to be the biggest city affected, and flooding could begin as early as Friday if predictions about a strong storm surge hold true. Worst case scenario, parts of Texas could be hit with 10 to 20 inches of rain and winds of over 100 miles per hour. Hurricane Ike, which hit the state in 2008, wasn't as strong as that; the last time Texas came up against such a serious storm was the Category 4 Hurricane Bret in 1999.

According to the NHC's tracker, Hurricane Harvey is currently a Category 1 storm, but it is projected to become a Category 3 hurricane by the time in makes landfall in Texas. It's not unheard of for storms to unexpectedly gain or lose speed, though, so nothing will be certain until it actually comes aground late on Friday night or early Saturday morning. This is why it's so crucial to follow the storm's progress — you can even get a hurricane tracker app, which we highly recommend that you do if you're anywhere near its path.