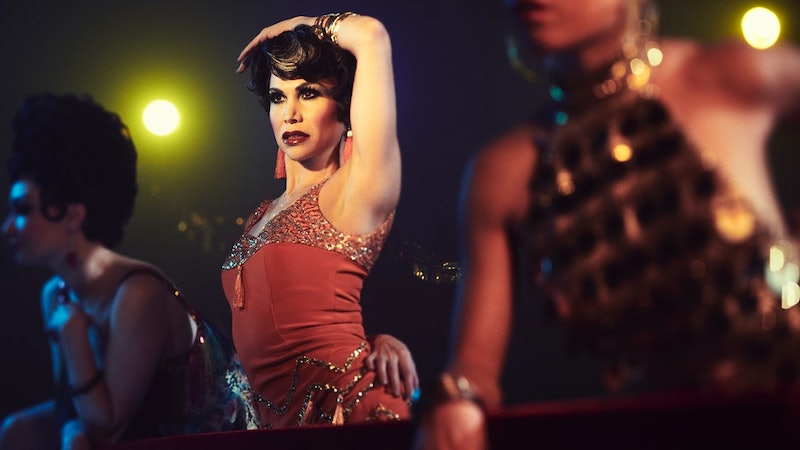 Potentially thanks to Ryan Murphy's Feud series, TV has seen a recent surge of mini-series based on the glamorous and unstable relationships between iconic artists and celebrities. These glossy, fictionalised retellings attempt to take you behind the curtain, and into some of the darkest corners of an icon's world, and that's no different with FX's latest take on the relationship between choreographer Bob Fosse and actor and dancer Gwen Verdon. It's already scooping up some incredible reviews, so I'm now wondering how I can watch Fosse/Verdon in the UK, because the US shouldn't get to keep all the glitzy drama for themselves.

While the series premiered on FX on April 9, as The Guardian reported, it's yet to find itself a UK air date, although that might be incoming. When the BBC announced on Oct. 10, 2018 that it would be expanding its partnership with US programmer FX, they also revealed some of the network's shows that they'd be importing, and Fosse/Verdon featured on the list alongside the recently aired Pose.

While an exact air date wasn't given, they did offer up a ballpark estimate, stating that they expected the show to land on BBC sometime "next spring." Bearing in mind that this was written in late October of last year, and we're just about to see the end of Spring, I reckon its airing could be imminent.

I've checked in with one of the show's reps at the BBC to see whether that'll be the case, so keep you eyes peeled for updates. In the meantime, you can step into the universe of the show via its soundtrack, which has been getting lots of attention, including from Bustle's Leah Marilla Thomas, who assured that it'll "make you want to break out your dancing shoes." And that also goes for the rest of the show too. Each of the episode's soundtracks will be made available for you to listen to on Amazon UK, following their airing, with individual tracks priced at 99p each.

If that doesn't get you in the dancing mood, then perhaps the fact that the series stars Blue Valentine's Michelle Williams as Gwen Verdon, and The Best Of Enemies' Sam Rockwell as Bob Fosse will. It's an exceptional pairing of talents, and the deeper you get into the show, the more uncanny their likeness to the real Fosse and Verdon becomes.

As Elle US writes, Fosse and Verdon first met in 1955 on the set of Damn Yankees. While Fosse was hired to do the choreography, Verdon was brought into play the lead role, and the rest is history. They married in 1960, had a daughter three years later, but according to the publication, Fosse's alleged affairs with younger dancers was the main cause for the couple's divorce in 1971.

You'll see all of this and more when Fosse/Verdon lands in the UK, and if it really does arrive soon, it'll put a spring in your step in more ways than one. Here's hoping that air date drops soon.