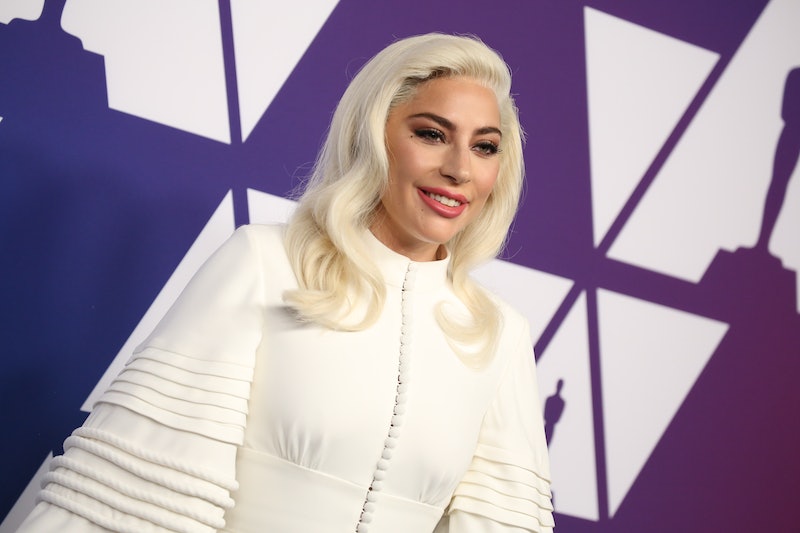 The biggest night in Hollywood is almost upon us, and once again millions around the world will tune in to find out which acting superstars will walk away with Oscars gold. This year's Academy Awards sees veteran nominees, such as Glenn Close, face off against acting newcomers including the likes of Lady Gaga. However, the star-studded ceremony actually takes place live in Los Angeles, so British viewers hoping to get in on the action might be wondering how they can do so. Thankfully, there are various ways to enjoy the show, so here's how to watch the Oscars in the UK.

As previously reported by Bustle, the evening will get going with the red carpet pre-show, E! Live From the Red Carpet, at 10.00 p.m. UK time on the E! Entertainment channel (Sky Channel 123). Due to the time difference, the ceremony itself, which this year will be celebrating its 91st year, doesn't get underway until 1 a.m. for British viewers, and as reported by Cosmopolitan, you can catch every second on the dedicated Sky Cinema Oscars channel (Sky channel 303). Don't panic if you're not a Sky subscriber, because you can watch the live ceremony on NOW TV, along with thousands of amazing movies — all you need is a Sky Cinema Pass, which will set you back £9.99 per month, though the platform does offer a a free month's trial.

The 91st Academy Awards will be held on Sunday 24 Feb. at the Dolby Theatre in Hollywood, Los Angeles, and the UK coverage is once again expected to be hosted by Alex Zane, who along with his guests, will provide commentary throughout the duration of the 2019 show.

As usual, this years batch of nominees centre around the very best of recent cinema, and major releases such as A Star Is Born, The Favourite, and Bohemian Rhapsody are expected to dominate the evening. However, for the first time in 30 years the Oscars will not have a host, and as reported by the Independent, the show will instead deliver a series of viral-friendly skits, as well as boast an all-star lineup of presenters. The first batch of presenters, who have the honour of handing out the famous statuettes on the night, include Jennifer Lopez, Daniel Craig, Chris Evans, Whoopi Goldberg, Tina Fey, Amy Poehler, Brie Larson, Charlize Theron, Maya Rudolph, Amandla Stenberg, Tessa Thompson, and Constance Wu.

The ceremony is also thought to have a heavy focus on music, especially after a strong year for music in film. Best Actress nominee, Lady Gaga, who also received a nod for Best Original Song, is scheduled to perform her smash hit "Shallow" along with her A Star Is Born co-star, Bradley Cooper. According to Variety, other performances on the big night will come from Gillian Welch and David Rawlings, with their rendition of "When a Cowboy Trades His Spurs for Wings" — a track featured in the Coen Brothers' The Ballad of Buster Scruggs. And Jennifer Hudson, who is currently appearing on The Voice UK, will also belt out "I’ll Fight" from the documentary RBG.

Despite not having a host, the 2019 Oscars are shaping up to be pretty legendary already, and I cannot wait to find out who will walk away victorious.

More like this
The Sean Bean Intimacy Coordinator Controversy, Explained
By Sam Ramsden
At 28, Lesley Manville Was Acting, Picketing, & Singing Kate Bush Songs
By Olivia-Anne Cleary
Stephen Graham’s Wife Plays A Vital Role In His Career
By Emma Madden and Sophie McEvoy
Jodie Comer & Tom Hardy Join A Motorcycle Gang In The Bikeriders
By Catharina Cheung
Get The Very Best Of Bustle/UK