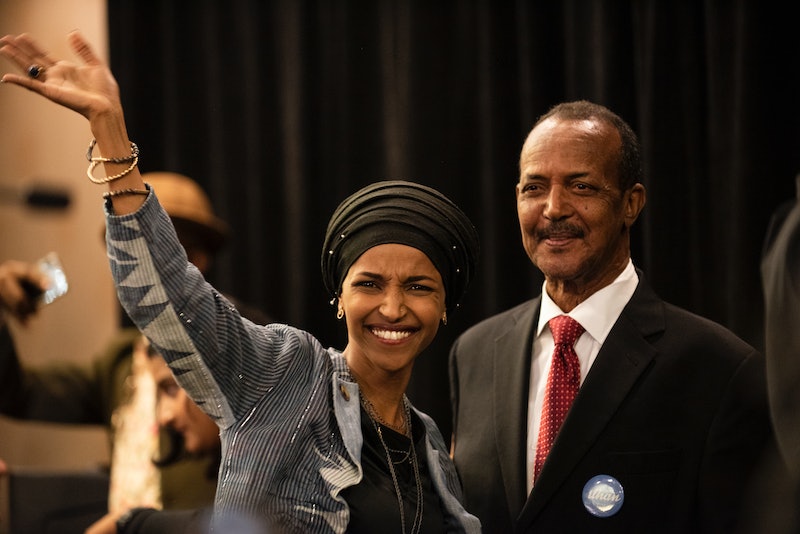 Nearly two months after the midterms, new members of the House and Senate are about to take their seats. The election of the 116th Congress was a historic event for women's representation in the U.S. government, so you may want to tune in to its first day on Thursday. Here's how to watch the new Congress getting sworn in.

C-SPAN and C-SPAN2 will be streaming the ceremony, which is set to begin at 12 p.m. ET. The swearing in itself is a bit drawn-out — there are a lot of members, after all; think of waiting through a high school graduation. But it's still a momentous occasion that's worth checking out. There will be some other noteworthy events on the same day: Rep. Nancy Pelosi (D-Calif.) will likely be elected the next speaker of the House, and she says she intends to immediately hold a government shutdown vote on Thursday, per NPR.

A whopping 102 women will take their seats in the House, by Pew Research Center's count. That's nearly a quarter of its voting members. Of those women, 35 (or 34.3 percent) are entering Congress for the first time. Rutgers reports that the previous record for female representatives elected to the House was 87.

Exactly a quarter of the Senate will now be made up of women, as 25 women, five of whom are new, will be sworn in on Thursday. The prior record was 23, per Rutgers. The vast majority of women serving in both chambers are Democrats.

Both senators and representatives will take the oath of office on Thursday. It's the pledge used by every senior official in the federal government besides the president, according to Roll Call. But the ceremonies in the Senate and House will be rather different, as the former is significantly more formal.

According to Roll Call, new senators make a ritualistic entrance in which they're walked down the aisle by their predecessor or the other senator from their state. Observers must remain quiet during the Senate oaths, but visitors in the galleries of the House are allowed to cheer people on. Member-elects in the House are also allowed to bring children onto the floor for the swearing-in ceremony.

The Senate leaders have already been chosen, whereas the next speaker of the House will be elected right before the oaths. That vote will occur by roll call, during which each member-elect must state the last name of the person for whom they're voting.

This Congress will be seated in the middle of a government shutdown, which is the first time that's ever happened. The shutdown began at midnight on Dec. 21 when the chambers failed to jointly pass budget appropriation bills that President Donald Trump would approve. Trump and many Republicans are fighting for border wall funding to be included in the budget, but Democrats continue to reject the idea.

The shutdown may very well continue beyond Thursday, since the president and the Republican-majority Senate may not support the funding bill Pelosi says she intends to pass after getting sworn in. NPR reports that her bill would fully fund all remaining areas of the government except for the Department of Homeland Security (DHS). Instead, DHS would get stop-gap funding to push back the border wall fight, with a new deadline of Feb. 8.

If you'd like to watch any of this for yourself, tune in to C-SPAN on Thursday at 12 p.m. ET.