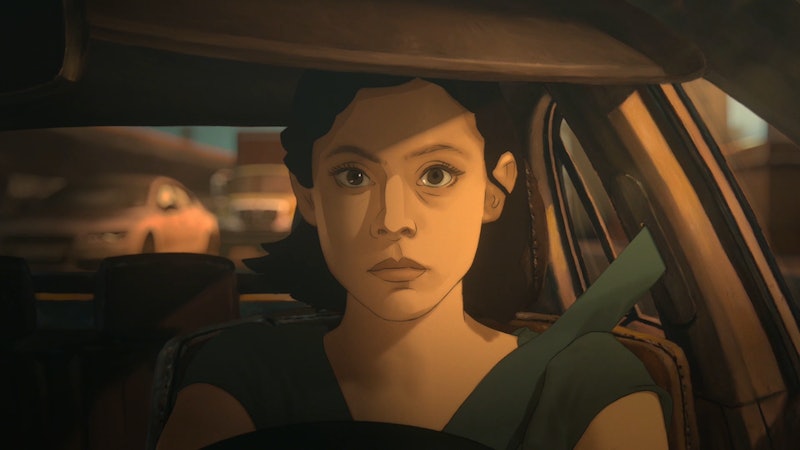 Spoilers ahead for Undone Episodes 1-8. "I'm so bored of living," Alma Winograd-Diaz intones to her sister Becca in the opening scenes of Undone. "I wake up ... I get dressed. I eat the same breakfast, and then I take the same commute to work. I'm 28 years old, and I'm terrified this is all there is." Amazon's trippy new animated series is about many things — mental health, generational trauma, and time travel — but it's also an accurate portrait of millennial malaise. Similar to Netflix's Russian Doll, Undone provides an existential fantasy for millennials like Alma, who feels disenchanted with work and society, and who can't help but say things that sabotage her personal relationships: what if time could be reversed? What if you could undo any hurtful things said, fix what's been broken, and ultimately find purpose and balance in life?

Both Undone and Russian Doll use the conceit of time travel to help their millennial protagonists deal with problems both large and small. Like Russian Doll's Nadia, Alma is a lovable, whip-smart rogue, but she's prone to moments of cruelty, insincerity, and selfishness. Nadia doesn't recognize she treats her friends and long term relationships with flippant disregard; Alma is more astute, but she tends to blurt things out to her sister, mother, and boyfriend that end up hurting them. On the surface, Undone and Russian Doll are about using a sci-fi trope to rewrite history, but on a smaller level, the shows are about the fantasy of making amends with the people who matter the most, and with each successive try, becoming a more complete and well-adjusted adult.

Time travel is an old trope, and the problems Nadia and Alma deal with are not necessarily unique to just millennials. In Undone though, you can see how Alma's position as a "woke millennial" sometimes negatively impacts her mental health, and how that then sometimes affects her relationships. The Pew Research Society found that millennials have higher levels of financial insecurity and are also more attuned to social issues than past generations. This is especially true for a biracial woman of color (who also has a family history of mental illness in Undone) like Alma, who's incredibly aware of society's inequalities.

"Is it sane we have to buy our food, and water, and land, and childcare, and that every part of our natural lives has been commodified, taken from us, and then sold right back to us?" Alma rattles off to her therapist. When asked if she's potentially suffering PTSD from her Episode 1 car crash — the reason she's even at the therapist — Alma demurs.

Sometimes this negatively affects her relationships. When Alma stands up to give a tipsy toast at her sister Becca's rehearsal dinner, she suddenly dives into discussing how she thinks that the whole "father giving away the bride" tradition is total BS, "as if the bride were her father's property, now being handed off to her new owner." One guy drunkenly whoops in agreement, but the rest of the room fills with awkward silence.

There are other times when Alma's waxing philosophic about society produces more amusement than anything, like when she gives her boyfriend Sam a long-winded rant about how the Alamo is where Europeans "fought and died for their freedom to own slaves" and how "economy corrupts ethics" and that feeds into "a history of systemic racism against Mexicans." Sam is not bothered by this, and Alma is also not wrong about anything she says. But considering Alma's conversation began in front of an Alamo reenactment and eventually ended at a bar, there's this sense that Alma is literally removing herself from time, from the present, due to frustrations over these looming, systemic issues.

And while some of Alma's inability to stay fully present in the moment can be attributed to the fact that she's literally sometimes falling through time (or, as the finale painfully hints, has undiagnosed schizophrenia), she's also just, at her core, a socially conscious, burnt out millennial, weighed down by everything wrong with the world.

To be clear, there is absolutely nothing wrong with Alma being attuned to social injustice. But like Nadia's journey in Russian Doll, Undone gently suggests that there's always a time and place for addressing things. In the same way that Nadia eventually realizes the importance of expressing how much her friends mean to her, so in Undone does Alma realize that perhaps her loved ones don't always need to be hit with cold, hard truths, and it's ok to just be with them in the moment.

This is demonstrated most clearly in Episode 7. During the "first look" wedding photos, Alma commits possibly the worst social faux pas of all: upset about needing to solve her father's death but also on edge because she's disenchanted with the whole institution of marriage, Alma explodes at her sister and reveals to the entire wedding party that Becca cheated. Alma immediately realizes her mistake, and forces time to reverse, back to a place where she never said something so damaging. When she redoes the scene, she doesn't take potshots at her mom and sister, and stays fully present for the entire day, the first time in the series we really see Alma enjoy life as is. Alma's father, and his calls for her to just focus on "the bigger picture" of fixing the world, fades into the background.

Connecting with loved ones in the way Alma does is integral to self-care when you're someone who's trying to fix big, societal issues, Zeenat Afzal of Rising.org tells BitchMedia. "Reach out to friends and family…or anyone on the same level as you. Reaffirm your identity and self-worth with people who can relate. Try to avoid any political discussion whilst you’re in these moments, as it’ll allow your noggins to take a break." This is especially true for a character like Alma, who is as concerned with society's problems as she is with her own personal mission of rewriting history itself.

Undone is indeed about many fantastical things, but the overarching message seems to be how time is precious, especially when spent with those who matter the most. As Alma and Becca lay under the stars in the desert in the final episode, the final takeaway could be that it's healthy, and perfectly OK, for millennials to just unplug from the news cycle sometimes, connect with those who matter, and find joy in the present.