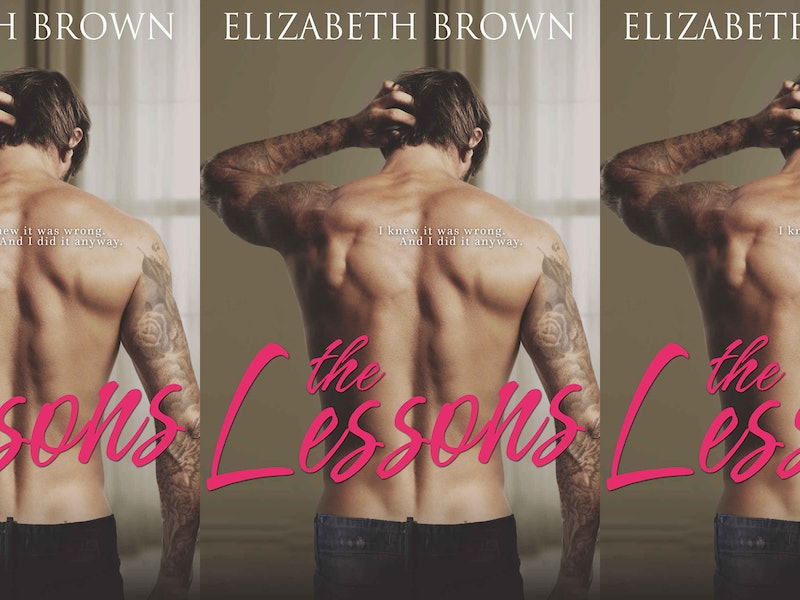 That was, until I picked up Elizabeth Brown's The Lessons.

I had been scrolling through NetGalley, a site where book reviewers and media professionals can read books before their publication date, when I came across the title and found myself intrigued, despite the salacious cover. The premise hooked me: A 30-year-old woman named Natalie signs up for a sex surrogate in order to lose her virginity. I had just read an in-depth article about sex surrogacy and sex therapy, that was incredibly fascinating by and I was definitely interested to read more on the topic.

According to the plot summary, Natalie's assigned surrogate, Ryan Andrews is (surprise, surprise) totally hot. Sexy hair, gorgeous face, ripped body, super athletic, and a total smarty-pants on his way to getting a PhD in psychology? Hell yes. I mean, erotica is supposed to be a fantasy, am I right? Even though Natalie and Ryan are meant to keep things strictly professional, they begin to fall for each other, and drama inevitably ensues. At this point, I have to admit that this all sounded... well, like something I might actually want to read? And then I saw that it was available for immediate download, and it was like the book goddesses had spoken: I was about to dive into my first erotic fiction novel.

The Lessons by Elizabeth Brown, $4, Amazon

I found myself surprised by the experience of reading. My expectations of what the book would be had been both met and exceeded in equal measure. One of the major factors that had kept me from trying the genre for so long is that I assumed there would be no real plot holding the book together between all the sex scenes. But... that actually wasn't the case at all. There was plenty of backstory and side characters and an entire plot apart from the romance about Natalie's cross-country move and a brand new high-stakes job at a huge company. I realized that my own prejudices against the genre had blinded me to the full truth of it: These were novels, about real people. Sex is part of that, yes, but there's much more to it than that.

When it came to the sex, I found that while there were moments that made me roll my eyes and cringe, but they were few and far between. Yes, there were scenes that did not align with my own proclivities, and there was plenty of supposedly sexy dialogue that just made made me want to throw the book across the room in embarrassment. But so much more of it made me laugh (when it was supposed to!) and made me think more about what I do find romantic or sexually fulfilling. And, best of all? It was fun to read. I realized that maybe... just maybe... I had been taking the idea of erotic romance just a bit too seriously.