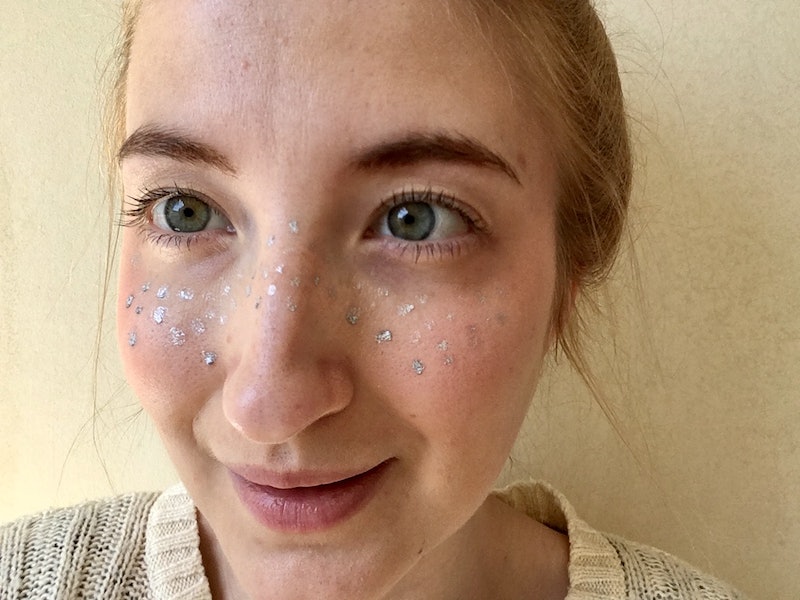 Rocking faux freckles is no new thing, but there's a shiny new upgrade to fake freckles on the cards for this summer. So, I tried rocking metallic freckles because these sparkling dots are hot on the horizon this coming season.

I'd take an educated guess that MUAs have been creating faux freckles on the faces of models for a long time — I mean, how else could they get them to look sun kissed in the cold days of winter? The fashion world is always one season ahead at least. But, Freck Yourself's plans to provide faux freckles to the masses back in 2015 with their Kickstarter campaign, along with the popularity of folks dabbling in experimental freckles on social media in recent years, just shows how much people want these playful spots. Some of the latest freckle fashions include 2016's galaxy freckles and the glittery star freckles spotted on the Dior runway.

Who can blame people for getting carried away with the faux freckle trend? Freckles are fun, youthful, and downright whimsical, plus they are reminiscent of summer no matter they're color. It makes sense that metallic freckles are set to be the next big thing, according to Hello Giggles.

So I gave these metallic freckles a dry run, to see how wearable they are in everyday life, so you don't have to!

I began with a blank canvas — a face of natural makeup. I wanted my frecks to shine, rather than have my makeup detract from them.

Hello Giggles reports that BeautyMarks temporary tattoos by Mr. Kate are going to be big. While I totally see the appeal of these pretty temporary tattoo style freckles — especially with each pack containing a variety of different frecks — I thought I'd go old school and use an eyeliner like I used to in the good old days, AKA fancy dress parties where I used to draw my own freckles on.

The process was actually harder than I imagined. My eyeliner started to get blunt and I realized there wasn't a sharpener in the house, so I had to soldier on.

I wasn't a fan of how 3-D my freckles turned out and I wanted them to look more matte and natural.

My once pointed eyeliner pencil soon became a mess.

But, when I finished I thought they didn't look so bad.

Even though they sure as heck didn't look natural (who was I kidding?!) I liked their magical vibe.

I also loved how they shone in direct sunlight — they'd be perfect for festivals!

Once satisfied with my ethereal freckles, I was ready to test-drive them IRL.

Metallic Freckles In The Real World

I began my work day and I was a little alarmed at putting my glasses on. I hadn't thought about the placement of where I wear my specs.

When I eventually took a break and removed my glasses, I noticed some of my freckles had seemingly rehomed themselves onto my glasses. I dashed to the nearest mirror to survey the damage but, to my surprise, the impact was minimal and the silver eyeliner on the bridge of my nose had only blended into my skin a little, rather than wiped off completely.

I had a bunch of errands to run, so, satisfied with the experience with my glasses, I donned my sunnies. As I walked into town, I realized my shiny new look wasn't as kooky as I'd thought; nobody batted an eyelid at my frecks. One man in the street however, did ask how I was doing, but I have no recollection of who he is. I got to thinking that perhaps my freckles acted like magnets and attracted strangers?

I went into a couple of stores and spoke directly with two sales assistants — neither of which mentioned my metallic spots. I was almost disappointed.

After popping home to pick up a jacket, I headed to the beach to get my daily dose of nature. It was super busy as it was the school holidays, so I had to find a quiet spot (a giant, seaweed encrusted pipe) in which to take my photo against. However, not one person looked at me weirdly or said anything to me. Considering the array of beauty experiments I get up to, this was a rare event and I quite enjoyed not feeling like a total oddball for once.

I thought my frecks looked sublime in the sunshine, especially with a backdrop of flowers I happened upon in a public garden on my way home from the beach.

Once home, I assessed the damage of my sunnies on my freckles and was pleased to see there was barely any sign that I'd likely smeared them. Although, as the day went on and I got tireder, I found myself accidentally rubbing my face, but my shining dots still held their ground.

Would I Wear Metallic Freckles Again?

Hell yeah! I'm a sucker for anything remotely ethereal and magical, plus I don't need an excuse to wear sparkly things on my face. I think metallic freckles would be an awesome addition to festival fashions, outdoor concert apparel, or worn in attendance at glam girls' days at the beach.

Although my eyeliner seemed to stay put throughout the day, I'd probably save myself the worry in future and invest in Mr. Kate's BeautyMarks as they last 2 to 4 days. But if you already have a silver eyeliner or eyeshadow in your makeup bag and you want to try this look, I'd recommend you save yourself some dollar and DIY your own metallic freckles first.

Whichever way you achieve them, metallic freckles are sure to leave you starry eyed this summer!