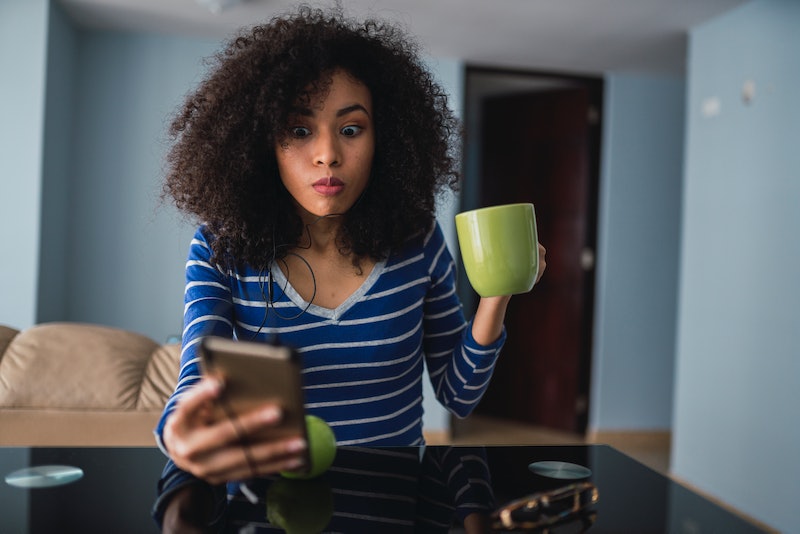 One of the coolest features in Apple's iOS 12 was Screen Time — a feature that allows you to track how much you use your phone and what apps you open the most. Of course, it can also be one of the most horrifying new features, depending on what you discover. So obviously, I decided to track my Screen Time with iOS 12 for four days, long before iOS 13 was released in September 2019, to get a clear picture of my phone habits.

In order to get a truly accurate read of how I spend my digital time, I didn't change my phone behavior while I was tracking it, nor did I check my screen time usage until after the experiment was over. However, after seeing what I actually do on my phone all at once, I might make some tweaks in the future.

If you've downloaded iOS 12 or later to your iPhone, you already have Screen Time. In fact, it's tracking your phone's actions right now. If you're brave enough to take a look, simply go to Settings and click on Screen Time to see your daily usage, as well as your phone behavior for the past seven days. Screen Time works by tracking how much time you spend on each app and breaks the data down into different categories like social media, entertainment, creativity, and more.

It also tracks how often you pick up your phone, when you use your phone the most, and it creates helpful charts and graphs for each day of the week. For example, I got 421 notifications during my four-day experiment, and I also learned that I pick up my phone about 30 times a day.

If you have an iPhone, iPad, and Apple computer, iOS 12 and later can sync with all of your devices and aggregate your screen time across all your, well, screens. Unfortunately, the day I started my iOS 12 Screen Time tracking, I spilled an entire cup of coffee on my MacBook Air, and it's now in the computer graveyard. If I had tracked my computer screen time along with my iPhone's screen, it would likely reveal that I spend a lot of time in Google Docs, my email, and watching The Tunnel on Amazon.

On my iPhone, I learned that I spend most of my time on iMessage. My next-most-used app during my four-day tracking period was Waze. After that, I hung out a lot on Safari because I Google everything I don't know or can't remember, and I spent most of the last four days furiously Googling "what to do if you spill coffee on your laptop." (The answer? Hope for the best, expect the worst.) After iMessage, Waze, and Safari, the majority of my time was spent listening to the podcast My Favorite Murder.

On Thursday, the day of the coffee incident, I spent most of my time on social media and Safari trying to find out how to save a coffee-soaked laptop. I also spent little time on a category called other, which when I clicked the "show apps and websites" button I learned was my podcast and maps apps. Friday, my Safari use spiked because I was searching for an affordable laptop. I spent very little time on social Friday but a lot of time on Waze and on my podcast app, and I picked up my phone almost 60 times between 6 a.m. Friday morning and midnight, twice my daily average.

On Saturday, my use was pretty low. I had myself a little social media with my morning coffee, and I listened to podcasts when I was riding my bike, but I spent a good part of Saturday reading an actual book and not using my phone. Sunday is almost all social media. My next-most-used apps during my four-day experiment were Amazon — where I do all of my shopping — Apple Maps, Instagram, Spotify, and Facebook.

Overall, I spent 18 hours and four minutes with my phone over the course of four days. According to Hacker Noon, which aggregated data from multiple surveys and studies, my phone usage is pretty middle of the road as the average person spends at least four hours a day engaged with their phone. Maybe that doesn't sound like much, but consider this: if you're awake for 16 hours a day, and you fall into the average category, you spend one-fourth of your waking hours glued to your device.

I have actually cut way down on my phone usage since I moved to a neighborhood near the beach. Whereas before I was spending six to eight hours a day on my phone, I now opt to ride my bike or walk on the beach instead. My previous behavior was a little troubling because studies have suggested that too much screen time is bad for your mental health, which makes a good case for a scroll-free September. In fact, U.S. News & World Report cited a study that examined mental health in relation to technology use from 1991 to 2016, and found that reports of feelings of wellbeing began to decline after 2012 as smartphones and social media became more ubiquitous. On top of that, a 2017 study published in the Journal of Affective Disorders found a strong link between heavy social media use and increased anxiety. Though the study established a correlation, the authors stressed that more research needs to be done to better understand it.

In a 2017 article I wrote about the high rate of anxiety and depression among millennial women, Los Angeles-based Licensed Marriage and Family Therapist Michele Goldberg, LMFT, ESQ, told me that social media and tech overload both contribute to stress, anxiety, and depression. "The constant distraction social media provides is more dangerous than its false connection," she said. Focusing on so much information and people outside of your own life, she explained, could cause you to lose touch with your own thoughts and feelings.

Personally, being constantly tethered to my phone makes me feel just like Goldberg said it would — bajiggity AF, hence why I made an effort to cut back. And, cutting back is now easier because Screen Time has something called App Limits. Once you've downloaded iOS 12 or iOS 13, simply go to Settings, then select Screen Time, then App Limits, which lets you set time limits for certain apps, choose apps you always want access to, and block certain content altogether. This means I can now set up times where I can't access my number one nemesis — my email, which is the greatest thing ever.

Even better, Apple introduced a few new Screen Time tools with iOS 13. If you've installed the latest operating system, you can set limits for entire collections of apps and websites, instead of doing it one at a time. In addition, you'll be able to see your Screen Time activity over a whole 30 days so you can compare separate weeks.

On both iOS 12 and 13, there's also a feature called Downtime to schedule time away from your phone — sort of like putting your phone in a time-out. I will admit that I haven't tried it yet because I don't want my phone telling me I've listened to too many true-crime podcasts and I need to stop. But checking my social media less frequently has helped reduce my anxiety. In fact, I've been off social so much that people have texted me to ask if I'm OK. I'm doing just fine, and I'm trying to live more in the real world versus through my phone. Guess what? It's not so bad out here.

This article was originally published on Sep. 24, 2018