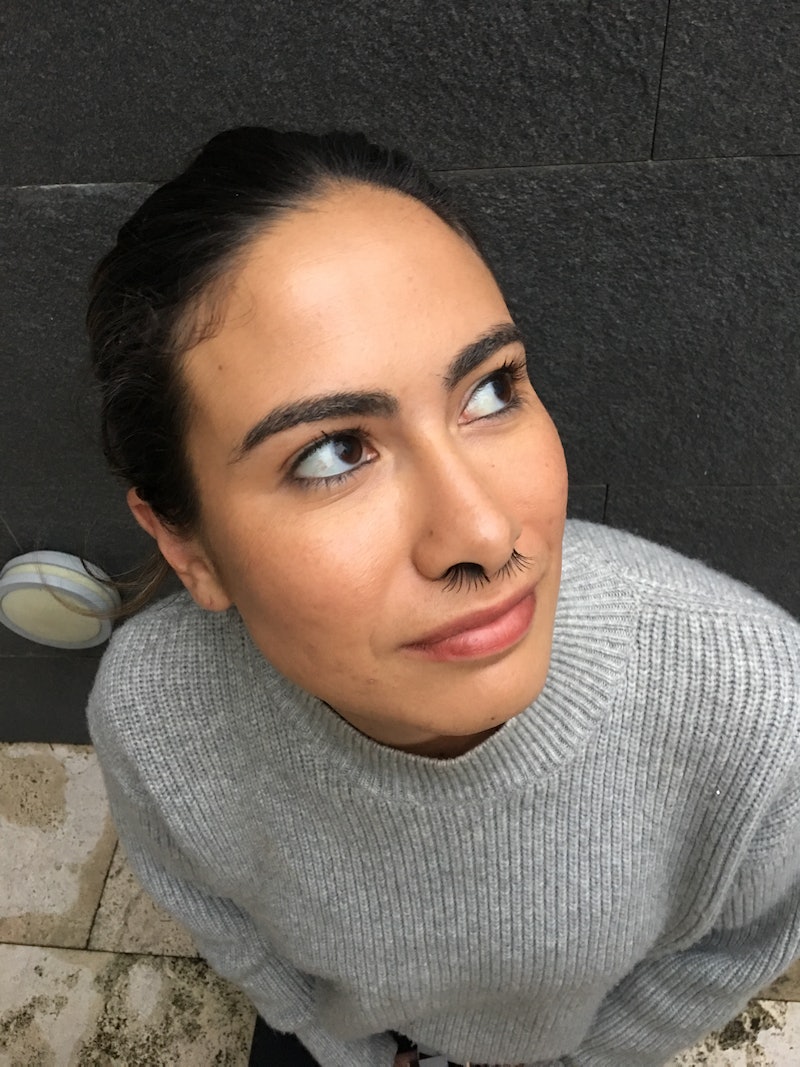 I am all for viral makeup trends. Styling my eyebrows with soap? Sure! Shaving my entire face with a razor? Bring it on! But this time, things have gone too far. According to the internet, nostril hair extensions are a thing, and yes, I decided to try in the name of beauty.

Earlier this week, the internet went totally nuts over photos of women who had glued fake eyelashes to the inside of their nostrils. It was as ridiculous as it sounds, and most of the world (myself included) was rightfully horrified. Well, at least, at first I was.

As much as I hate to say it, as a beauty writer... my interest was piqued. Were these ladies onto something? Was nose hair about to be some sort of new, uncharted beauty territory? Considering there was a day not too long ago when eyebrows were just eyebrows — sans glitter and braiding and freaky Photoshopped ponytails — maybe it wasn't that far-fetched to think that nose hair could be next? After all, we are the generation who created "Glitter Tits" and apply foundation with condoms, so at this point, there's really nothing that's out of the question (our grandkids are going to be so, so proud).

The more I thought about it, the more I realized what I had to do: I had to try it. It's a dog-eat-dog world out there, and if this is what the kids are doing these days, I don't want to get left behind.

I shamefully searched Google with the inquiry "how to DIY nose hair extensions" until I stumbled upon this helpful tutorial:

Apparently, all I needed to do was find some fake eyelashes, curl them into nostril sized circles, and stick 'em on up there.

I've never really used fake eyelashes before, and also didn't know how big a "nostril-sized circle" actually was, so the whole thing was kind of a crap shoot. Luckily, they were already prepped with adhesive, and I made a lucky guess as to what size ring would fit snuggly in my nostrils.

Unsurprisingly, it is very difficult to stick something up your nose and keep it there when you are dying laughing.

Also, it really, really tickled. I was genuinely afraid that I was accidentally going to snort the lashes up into my brain.

Once the "extensions" were secured in my nostrils (I was actually surprised at how easily they stayed up there without the help of any extra glue) I had to admit they didn't look that bad... except that it looked like I had either a mini-mustache or spiders crawling out of my nose. Still, though, not as horrible as I expected.

So, I decided to take my new #lewk for a spin.

The reactions I received from the people in my building (yeah, right, if you thought I was actually going outside with these things) ranged from "honestly, they aren't as bad as I thought they were going to be" to "you look like you inhaled a cockroach." I also had a three-minute conversation with a friend of mine who didn't even realize I was wearing them, which was equal parts concerning and hilarious.

My nostril glam stayed in tact through multiple conversations and a lot laughter, but after a half an hour, they got itchy and I had to take them out. Actually, my nose is still a little itchy as I'm writing this.

So, do I think nose hair extensions really are going to be the new eyebrow? Ugh, I hope not. I feel like we can do better, millennials.

But at the very least, this B-A-N-A-N-A-S trend earned me a new Tinder picture.

More like this
13 January 2023 Beauty Launches Our Editors Can't Get Enough Of
By Rachel Lapidos
Pamela Anderson's Most Iconic Makeup & Hairstyle Moments
By Olivia Rose Rushing
The Best Beauty Looks Spotted At Paris Couture Week 2023
By Audrey Noble
15 Modernized '60s Makeup Looks & Hairstyles That Feel Wonderfully Retro
By Olivia Rose Rushing
Get Even More From Bustle — Sign Up For The Newsletter
From hair trends to relationship advice, our daily newsletter has everything you need to sound like a person who’s on TikTok, even if you aren’t.