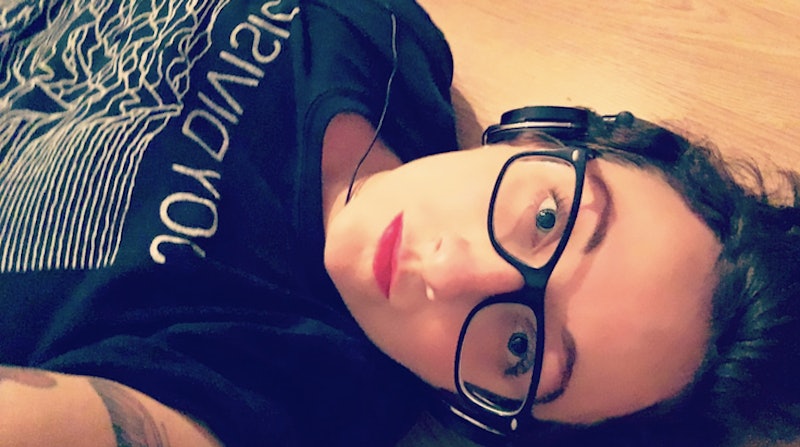 I’ve never been lucky in love. Which, honestly, is ironic considering my name “Amanda” means “worthy of love.” While I have been in love with people, it was rarely simple. My first love, Timothy, was easy, comparatively speaking. But lots of things are easy when you’re 21. Back then, my biggest concern was trying to get to my 9 a.m. psychology class on time, which I never did. Timothy and I were just two people who went in different directions, as is usually the case when your first love comes around so early in the story.

My second love, Christoffer, wasn’t easy. It was one of those dreaded “unrequited” loves. I was in love with him, but he wasn’t in love with me. Despite these contrasting feelings on the matter, we were inseparable for four years, traveling together, spending holidays at my parents’ house, and even sleeping together. Every day of those four years I hoped he’d magically realize he was in love with me. But it never happened. When he met someone else, someone he was in love with, it all came to an end. He loved me and always would, as he told me, but he'd never be in love with me. I label this relationship “the greatest devastation of my life,” because I think I may have loved him most.

I married my third love, Olivier. I loved him very much and with everything I had, but after Christoffer, there wasn’t much love left to give. I knew Olivier loved me more than I loved him. I hated this fact; I despised myself for this being the truth. But because I did love him with all the parts of me that had survived Christoffer, I thought it was enough. Like most things in life, though, where there’s an inequality, there’s a problem. I’d never say I drove Olivier to cheat on me, but looking back, I do take some responsibility for what happened with us. He wanted, or rather needed, something I ultimately couldn’t give him. Because of this, he found it in someone else. I initially labeled this one “the greatest humiliation of my life.” But when Olivier passed away last July, it got a new label: “the greatest, most beautiful disaster that wasn’t quite a mistake, but definitely was a lesson I probably had to learn.”

In the months that followed the demise of my relationship with Olivier, I vowed to never love again. I was going to take the Morrissey approach to things, to live a life that transcended the human need to be loved. I was going to be above “all that nonsense,” as I told anyone who would listen, and prove myself superior to such lofty, whimsical, basic malarkey like love and relationships. It’s amazing the brilliant plans one can come up with when they're spending weeks in bed, heart torn into dozens of pieces, pretending they’re celebrating their "freedom," with a bottle of Veuve Clicquot perpetually at their side.

I was, more than anything, determined. Amanda Chatel would never fall in love again.

When I finally pulled myself from that bed, I wasn’t any clearer on the subject at all. I was, more than anything, determined. Amanda Chatel would never fall in love again.

So I didn’t. I stuck to it for the rest of 2015, all of 2016, all of 2017, and into 2018. It wasn’t hard. When you deliberately shut yourself off from the world and build a wall around you, one of both physical and emotional distance, it’s actually quite easy. Even when I laid in bed next to my non-relationship guy and he told me he loved me, I rolled on my side to face him, told him I loved pizza, then suggested we get some. If I were a politician, this would be called a pivot.

But a few weeks ago I was at, of all places, an elephant sanctuary in Chiang Mai. Despite having a deep love (read: obsession) with all animals, elephants, because they’re one of the few species that have the capability to mourn, have always been one of my favorites. There’s something profoundly beautiful about the fact that these gorgeous animals, when they come across the bones of one of their own, will actually take a moment to mourn that elephant. Our society, on the other hand, can have such little regard for human life.

As I walked next to these amazing creatures, most of whom had suffered immeasurably at the hands of human beings and were there to recover from those atrocities, I realized how truly remarkable it is that something can love, grieve, feel compassion, show anger, and experience joy. I was initially thinking about the elephants, but then, as I thought about it more, I started thinking about myself and my past loves. Yes, I am, evidently, that person who goes to an elephant sanctuary half a world away just so I can recap my love life while standing in the middle of a herd of elephants.

What a waste, I thought, to be so capable of love, albeit unlucky in it, and to avoid it. How completely unfair it is not just to myself, but to everyone around me, as I’m a far more pleasant person when I’m in love. Also, how sad; how sad to cage myself and cut myself off because of disappointments in love. Life is full of disappointments, heartbreaks, and setbacks. But, when you think about it, that’s the good stuff. Granted, we don’t realize it until after the fact — well after the fact — but had I not loved and lost those three people, I wouldn’t be who I am today. If I hadn’t loved and lost Olivier, I wouldn’t have been standing there in Thailand, realizing this in the first place.

So, I made the conscious decision to let myself fall in love again.

I would no longer roll my eyes at the topic of love, get on my pedestal and tell all my friends that it’s “just a damn chemical reaction necessary to prolong the existence of the species,” or hide from it. I decided if the words, “I love you,” bubbled up in my throat, I wouldn’t swallow them down, but say them — even if the timing seemed weird or it made me come off as over-zealous. I'd quit flip-flopping on my feelings about my non-relationship guy and realize that maybe it really is love, or at least some version of it. I would accept the fact that to love again, to take a risk, had a chance of backfiring on me. And if it did, I’d just let it wash over me, proud of myself for taking that risk, for jumping headfirst into a pool before knowing if it even had water in it.

I realized that day in the elephant sanctuary, it would be a supreme waste to not let myself love or be loved again. It would be a damn tragedy.

Naturally, all of these things are easier said than done, but as I realized that day in the elephant sanctuary, it would be a supreme waste to not let myself love or be loved again. It would be a damn tragedy.

According to anthropologist and human behavior researcher Dr. Helen Fisher, love is “life’s greatest prize.” Not just that, but it’s supposed to shake you to the core, and force you to feel a whole spectrum of emotions.

I realize, ultimately, falling in love is out of my control. Once I let those walls around me fall, I'm at the mercy of love — and life — again. It's a scary reality. It's terrifying to think that I'm about to offer myself up and allow myself to be vulnerable. But what's even scarier is to think that I could live the rest of my life without knowing love again.

Dr. Fisher says, "almost nobody gets out of love alive," but no one is getting out of life alive either, so I might as well throw myself to the wolves again, cross my fingers, and hope for the best. I imagine that's what elephants do, so why not me, too?