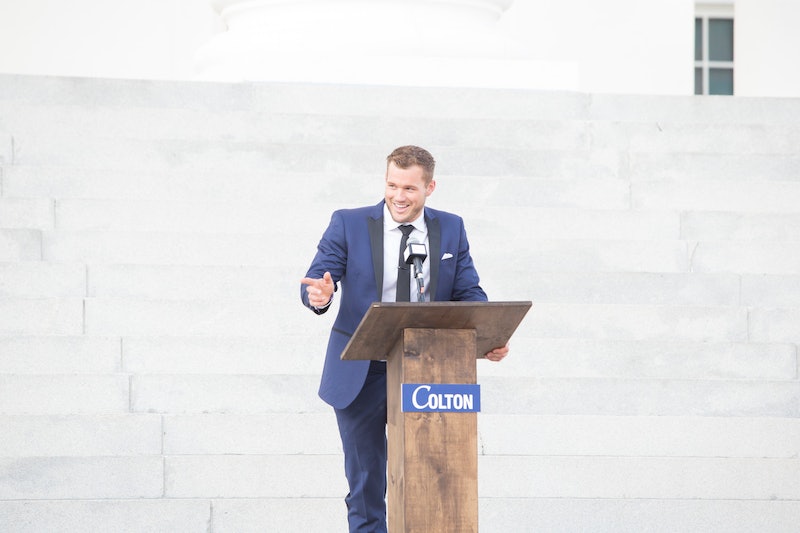 Right now, Bachelorette Becca seems to be pretty into Colton. There is one minor issue, though — Colton went out with Tia, Becca’s pal from Arie’s season. Early in the season, Colton told Becca about their history. "Prior coming onto this in January, I had a relationship with Tia. And I wanted to make sure to explain, sort of, that we had a weekend together, and we had a good time, but for me, the timing wasn’t right to grow what was a spark into a flame," Colton said on The Bachelorette. "If my feelings were strong enough, I wouldn’t have came on this. And I think that, what I know of you, we could have a ton, whereas it wasn’t there with her."

Tia sort of corroborated this to Becca, telling the Bachelorette that their relationship wasn’t much of anything — just a weekend together — and that when Colton told Tia that he had applied to be on The Bachelorette, Tia let it fizzle out. “Whatever, we may as well stay friends,” she said. But Colton’s insistence that he wouldn’t have gone on The Bachelorette had his relationship with Tia been stronger is interesting, because Tia was at one time rumored to be the frontrunner for the Bachelorette role before Arie dumped Becca and sent her on her own path to find love.

But wait — there’s more (Bachelor in Paradise spoiler warning). According to Reality Steve, who thankfully spoils The Bachelor for a living, Colton and Tia were seen filming Bachelor In Paradise in Mexico, along with Tia’s BFF Raven Gates and her man, Adam Gottschalk.

The only way that Colton can be the next Bachelor is if this thing with Tia on Bachelor in Paradise doesn’t pan out. It may, it may not — not many more spoilers have been posted besides those pics of that double date.

The biggest question is this — why is Colton a part of this franchise in the first place? If he met Tia and liked her and decided to bail on her because he wanted to be with Becca, well, that’s a jerk move. If he didn’t like Tia, went on the show to be with Becca, decided he didn’t like her and went back with Tia to be on Bachelor In Paradise, that’s a jerk move, too. It sounds like attention-seeking behavior to me, a seasoned veteran of Bachelor Nation. See what I was saying about the drama if Colton should become the Bachelor?

If Colton has any shot at being the Bachelor, he and Tia have to have some sort of tearful split in Paradise, or he has to have no real romances at all. It’s the Nick Viall edit — Nick was on two seasons of The Bachelorette, and people hated him. Then, he was on Bachelor in Paradise, and he managed to get a sympathetic edit. Boom — he was the next Bachelor, picked from a pile of aging nobodies to helm the new season of the series. Colton can be a believable Bachelor — and not just a man bouncing around from semi-famous woman to semi-famous woman — if people want him to succeed and find love. Right now, that’s up for debate, but should he get that coveted spot, there is sure to be plenty of drama.