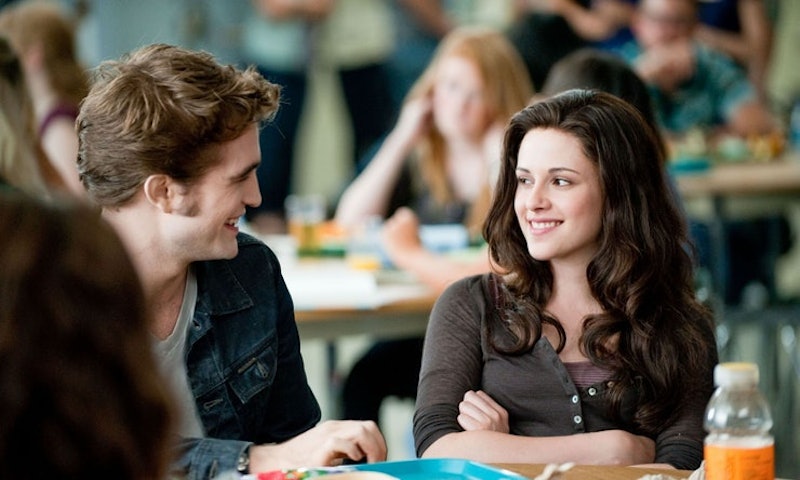 Yes. It is 2018, and I am going to (kind of) defend Twilight. Yes, Twilight does romanticize abusive relationships. It does that, 100 percent. Yes, the writing is riddled with clichés. Yes Stephenie Meyer altered the history of the Quileute people to serve her own werewolf fantasies, and yes, Renesmee is a terrible, terrible name.

We seem to finally be far enough from the first wave of Twilight-mania and the resulting backlash of Twilight hate to acknowledge that the way we talked about Twilight back in the day was maybe just a tad sexist. There were a few feminist critiques in the mix, to be sure, but a good deal of the casual Twilight reviews stopped at "it's stupid," "Bella is stupid," "vampires shouldn't sparkle," and "Twi-moms are weird."

As many more nuanced pop culture critics than I have pointed out, the hatred of Twilight was clearly wrapped up in a hatred of teen girls. Perhaps Melissa Rosenberg, the screenwriter of Twilight, put it best in her interview with Indie Wire:

We’ve seen more than our fair share of bad action movies, bad movies geared toward men or 13-year old boys. And you know, the reviews are like okay that was crappy, but a fun ride. But no one says “Oh my god. If you go to see this movie you’re a complete fucking idiot.” And that’s the tone, that is the tone with which people attack Twilight.

...because it’s female it’s worthy of contempt. Because it feels female, it is less than.

Rosenberg's not wrong. I saw both Transformers and Twilight in the movie theater, one year apart. But I only felt ashamed for watching Twilight, even though Transformers is far more upfront with its hatred of women.

Because here is my dark and shameful secret: I liked Twilight. I read the first book at age 12 or 13, and I loved it. By the time the third and fourth books came out, I had learned that liking Twilight was Bad, and that only Stupid Girls read cheesy romance novels, so I pretended to be reading them "ironically," and joined most of my classmates in ridiculing those Other Girls who wanted sparkly vampire boyfriends.

But I'm glad that I had a few brief moments with Twilight before it was deemed too stupid and girly for human consumption. As problematic as it is, I'm grateful that I read Twilight. And more specifically, I'm grateful for Edward Cullen.

Let's put aside Robert Pattinson for the moment, as well as Christian Grey, Jacob Black, and the gender-flipped Edythe Cullen, and focus on Edward himself. Twilight's main attraction.

Edward is "inhumanly beautiful." He's mysterious, magical, and sparkly. He's rich and musically talented and super strong and has a "seductive" voice, and he barely exists outside of his all-consuming love for Bella. And as a 13-year-old, I was into it. I have the fan art to prove it.

Yes, Edward is unrealistic, much like how poor Megan Fox in Transformers, awkwardly draped over that motorcycle, does not reflect the behavior of a real human woman. Edward is pure fantasy: a sexy, gorgeous, sparkly, intelligent boy who likes Bella even though she's ordinary. And that's OK.

We all know that Bella Swan is your standard reader-insert character (sorry, Bella), after all. She has just enough personality to feel like an insecure teenage girl, but not so much personality that you can't slip her on like a pair of pants (the only personality traits I can remember Bella having is that she was clumsy and she didn't like music).

She wasn't a Strong Female Role Model. But I had other book characters for that—Matilda and Lyra and Meg Murry and Jane Eyre and Scout Finch and so on. I read "literary" books at that age, too, and I knew that they were officially "better" than Twilight. But none of them captured my low self-esteem, confusing hormones, or gym class embarrassments the way that Bella did.

Plus, Bella had Edward.

Many people presume to know why young girls liked Edward. “He’s dangerous, and young girls want to be chased, they like a bad boy,” and so forth. Most of them seem to miss the point: Edward possesses the power to hurt Bella, but he chooses not to hurt her because he cares about her. He's restrained. He puts her safety above his own desire every single time. I can't say the same for many of the men I've known in real life. We’re facing the ugly truth these days that most men in our society do indeed have the power to hurt women. From the time that young girls receive their first catcall, they know that men can be dangerous.

So is it really such a crime for a teen girl to imagine a man who does everything within his power not to hurt her? A beautiful, vampire Ken doll who wants to take it slow, who would never pressure her into sex, who makes a point of never, ever biting her without permission? (Yes, I know he also secretly watches her sleep, and that part is not so great). Given how often teen girls are relegated to the role of Megan Fox on a motorcycle, only desired and never desiring, is Edward really such a terrible fantasy to have?

Vampires are sexy because their main monster trait is desire, albeit desire for blood instead of sex. But in Twilight, Bella is always the one to try and initiate physical intimacy, and (dark, tortured) Edward is the more reluctant one. It's a safe fantasy for a young teenager who's still figuring out their sexuality, as well as a subversion of the typical lecherous vampire/man trope.

And yes, it's also pushing Mormon values and the vampires sparkle. I didn't say it made perfect sense.

Of course, the fantasy of Twilight does play into plenty of gross cultural stereotypes about stalking and controlling behavior being sexy. So does Love Actually and Star Wars and Game of Thrones. That doesn't mean that Twilight should be off the hook for romanticizing abuse—but it feels like a bit of a double-standard if we're going to loudly condemn Edward's problematic behavior but not Ted Mosby's or Han Solo's.

I’m not going to argue that Twilight is an underrated work of great literature, or that Edward and Bella provide a healthy model for a romantic relationship. I'm not even going to argue that it's not silly—the sparkly vampires do play baseball. But instead of mocking these silly books because teenage girls like them, maybe we should start thinking about why teenage girls like them. How starved were we for romantic fantasies, that Twilight became such a huge success? Why are straight women's problematic fantasies considered so much worse than those aimed at straight boys?

Looking back, it makes me sad how quickly I distanced myself from a silly, gushy romance novel that I liked, just because I didn't want to seem like all those "other girls." And it makes me glad that I got to enjoy a few years of silly, problematic, safe vampire fantasies. I only hope that the next generation's Twilight does better.