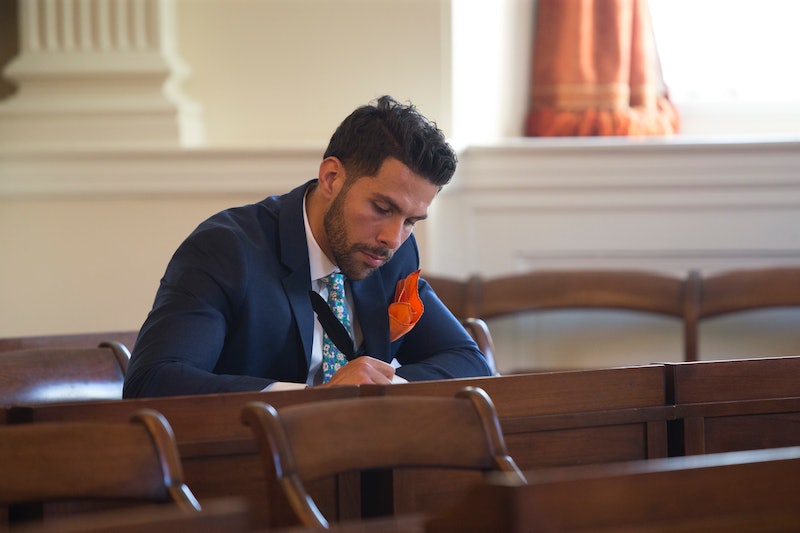 Being on The Bachelorette can be an isolating an experience — you’re all alone, with no connection to the outside world, and you’re forced to think only about the woman whose affections you're vying for. It can be maddening, especially if you're not getting all the attention you wanted or expected from the lead. As evidenced by his mini-meltdown last week, Chris is having trouble containing his frustration at having to compete with so many other guys. But despite not making the best of impressions on Becca lately, it's still fair to wonder if Chris is single after The Bachelorette, or if he managed to change the Bachelorette's mind and take home her final rose.

As of the June 25 episode of The Bachelorette, Chris is in the running for Becca’s heart, but let’s just say that things aren't going terribly well for him. Of course, Becca has to give a little bit of her time to every man on the show, but Chris somehow did not seem to understand this, and threw a fit when his strategy of waiting for Becca to come to him failed miserably. Chris was doing really well on the Las Vegas date — he sang Wayne Newton’s “Danke Schoen,” and everyone loved it. But then, during the group date cocktail party, Chris took a turn. After doing well on one measly date, Chris decided that Becca should be taking more of an interest in him and she should be seeking him out if she really liked him. Oh, honey. Have you ever seen this show before?

It only got worse during the regular cocktail party, when Chris said that Becca owed him “50,000 kisses” for not hanging out with him during the group date. Who is this guy, and what planet does he come from that he thinks that Becca owes him anything for talking to other men? Becca ultimately opted to keep Chris around, giving him a second chance, but she’s a better person than I am for sure. And who knows, maybe Chris and Becca ended up together, and he’s no longer a single man. I went to his Instagram for answers.

The Orlando-based sales trainer (according to his ABC.com profile) does have an active Instagram account, and on it, you’ll find pictures of Chris with women. Many women. But they all seem to be his family and good friends — he even wrote a little ode to his mother in one, saying, “The best thing about last night wasn’t watching myself on TV fighting for love but the smile my mother had on her face spending time with me watching it. I haven’t seen my mother smile or have that much fun as long as I can remember.” Okay, Chris is winning points back.

He also has a lot of pictures with his guy friends — Chris seems to roll in big groups of dudes.

As it stands right now, Chris seems to be a single man. He’s single, or he’s doing a good job of hiding if he’s in a relationship. Obviously, Bachelorette contestants have to be stealth about using their social media accounts after filming has wrapped (we don’t want another season of Kaitlyn Bristowe spoiling her season with Snapchat), so maybe Chris is just playing it cool. Chris’ name is not on the list for Season 5 of Bachelor In Paradise, per PEOPLE, so he won’t be competing for another engagement — unless he makes a surprise appearance later in the season, which isn't unheard of. For now, we’ll just have to watch the show and see what happens in regards to Chris’ relationship status. For starters, I recommend that this contestant oh, uh, talk to Becca on future dates? That could help him seal the deal.