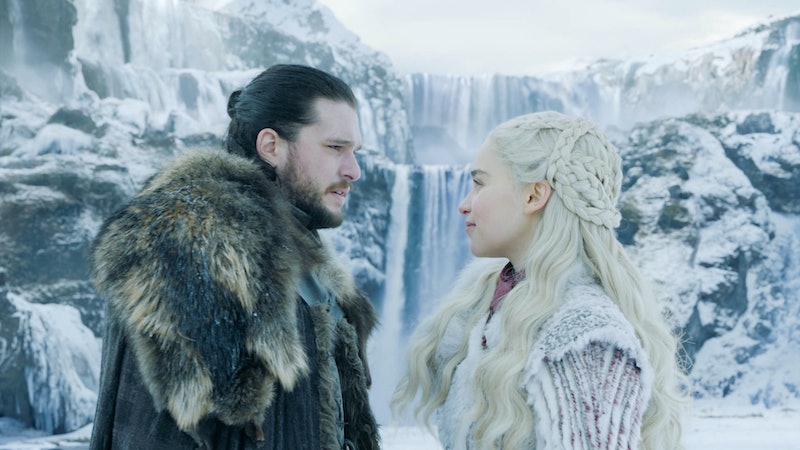 Daenerys Targaryen and Jon Snow were so blissfully in love during the Game of Thrones Season 8 premiere. But their dynamic is going to drastically change now that Jon knows the truth about his heritage. Yet, they can't go back and erase what's happened, so Daenerys could be pregnant on Game of Thrones with Jon's baby. Sure, the fun, sexy times for this aunt and nephew may come to a screeching halt now that Jon is aware of their true relationship. But viewers have uncomfortably watched them have sex before, and considering that Daenerys believes she can't have children and that contraception probably isn't a thing in Westeros, there's a real chance she could be pregnant if Mirri Maz Duur's prophecy is wrong.

Back in Season 1, Daenerys became pregnant with Khal Drogo's son and he was predicted to be the Stallion Who Mounts the World. Yet, baby Rhaego was stillborn because of the blood magic performed by the vengeful Mirri Maz Duur. She had used Dany's child's death to save Drogo's life, but the "healer" never wanted Rhaego to live anyway. Mirri Maz Duur claimed that Rhaego was born disfigured and Drogo was left alive, but in a vegetative state. When Daenerys asked when Drogo would be how he was, Mirri Maz Duur replied, "When the sun rises in the west, sets in the east. When the seas go dry, when the mountains blow in the wind like leaves."

Unless a conversation occurred offscreen between Daenerys and this godswife before Daenerys burned her, it seems that Dany has applied this Drogo prophecy to her own fertility. She alluded to not being able to conceive to Jon, but was more explicit about it in the Dragonpit during the Season 7 finale, "I can't have children." And when he asked who told her that, she replied, "The witch who murdered my husband." But viewers never heard Mirri Maz Duur say anything like that and instead, it seems like the HBO series played a little fast and loose with the prophecy from the A Song of Ice and Fire books. In George R. R. Martin's book series, Mirri Maz Duur ended her Drogo prophecy by saying, "When your womb quickens again, and you bear a living child. Then he will return, and not before."

So while Mirri Maz Duur didn't talk about Dany's ability to bear children on the show, viewers are supposed to believe — like Daenerys does herself — that she can't have children. Yet, even know-nothing Jon Snow brought up how this prophecy might not be true. "Has it occurred to you she might not have been a reliable source of information?" Jon asked Dany. And while she laughed it off, that feels like it was a major sign that Jon will impregnate her. After all, they've continued their lovefest in Season 8 and the below preview photo released by HBO ahead of the second episode sure makes it look like Dany could be pregnant due to the placement of her hands.

What's interesting is that Mirri Maz Duur's prophecy could still kind of hold true even if Daenerys becomes or is pregnant. While the sun isn't rising in the west, the world around them is pretty much ending as they know it with the White Walkers coming to attack humanity. So maybe due to these cataclysmic events, Daenerys is able to become pregnant again.

Then there's the fact that a baby between Daenerys Targaryen and Jon Snow/Aegon Targaryen could both be the undisputed heir to the Iron Throne and the Prince or Princess That Was Promised.

With Game of Thrones only having five episodes to wrap things up, a Daenerys-Jon baby opens up many possibilities for the ending that seem truly fitting for a show that's about 1.) who will sit on the Iron Throne, 2.) who will defeat the White Walkers, and 3.) the combination of ice and fire. So remember what another witch said to Daenerys — "Prophecies are dangerous things" — and don't assume that Mirri Maz Duur was right. Rather, you should be focused on whether or not Daenerys will survive to see her baby live.