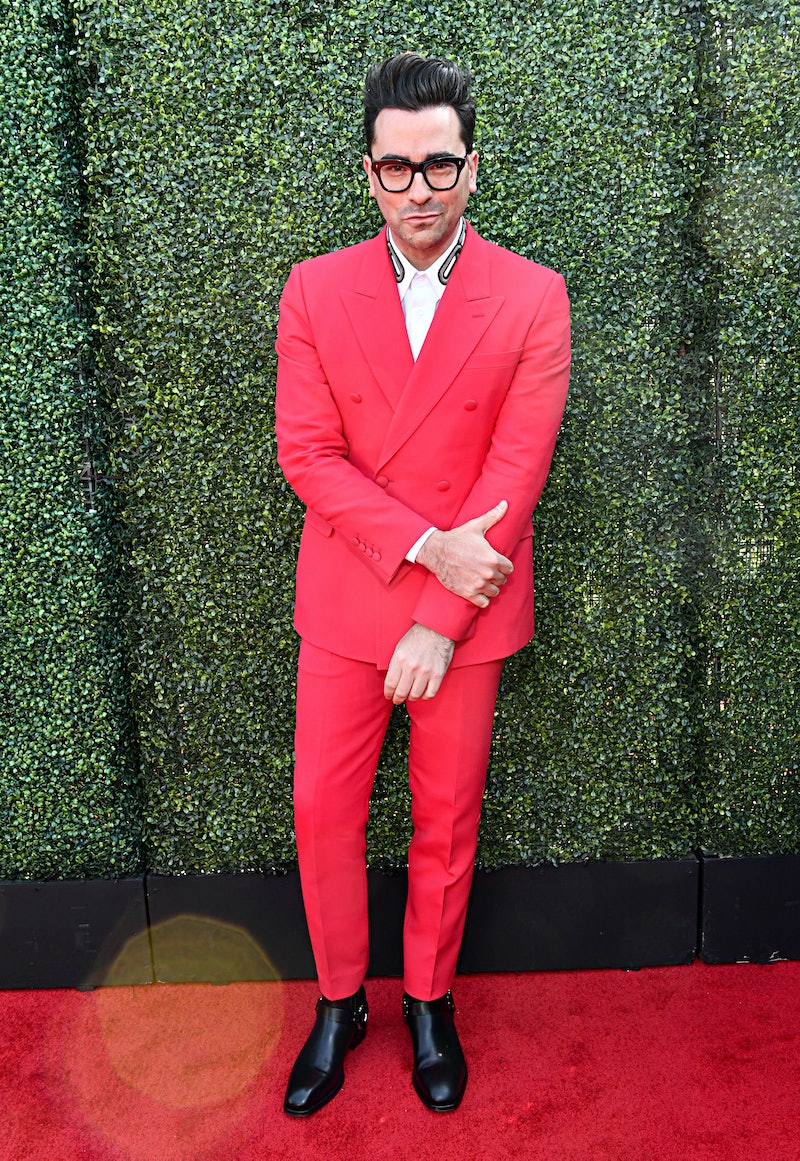 Dan Levy's life has gone from once being an MTV Canada VJ to being nominated at the MTV Movie & TV Awards for his own show. He's up for Best Comedic Performance as David Rose on Schitt's Creek (the Pop show is also nominated) for the 2019 ceremony, but don't expect that he'll be walking the red carpet with a significant other. Unlike his character on Schitt's Creek, Levy seems to be single in 2019. But even if his love life doesn't match David's on Schitt's Creek, this MTV Movie & TV Awards nominee has helped change how LGBTQ characters' relationships are represented onscreen.

As Entertainment Weekly reported, David is pansexual on the show, while Levy self identifies as gay. David has been in a steady relationship with Patrick and at the end of Season 5, the couple gets engaged. In real life, Reid is also engaged since he proposed to his girlfriend in January 2019. As for Levy, it appears that this creator, showrunner, and actor is currently single or just not in any public relationship.

And at the 2019 MTV Movie & TV Awards, which air on June 17 at 9 p.m. ET but were previously pre-taped, Levy didn't need a significant other to walk the red carpet with. He was busy hanging with his costars Annie Murphy, Noah Reid, and Dustin Milligan.

Levy, who was featured in People's Sexiest Man Alive issue with his dad and costar Eugene Levy in 2018, explained a few years ago how being the showrunner and star of Schitt's Creek hasn't allowed him much time to focus on his love life. "I'm single right now. I've been single for a bit. It's a strange thing. I don't know whether it's an excuse that I'm telling myself or whether it's just what it is, but I feel like this job has consumed my life," Levy told Out in 2015. "I hope that I can find someone when it's all done, or when things are a little bit more smooth. But the eye has really been on making sure that the show is as good as it can be, so that I can be employed for another year."

Levy added in that interview, "When the time comes and all the stars are aligned, someone else will come in and hopefully we'll call it a day in the love life department." But his schedule has only gotten busier since that statement since he also hosted the first two seasons of The Great Canadian Baking Show, has begun directing the final episodes of Schitt's Creek, and gets asked to hang out with people like Michelle Obama these days on her Becoming tour.

The sixth season of Schitt's Creek will be the show's last, so Levy might have a bit more time on his hands after it airs. And for all the public knows, he just may be seeing someone privately. But it doesn't seem that things have changed when it comes to the time that he's able to allot to his personal life. He told GQ for a February 2019 profile how he has places in both Toronto and Los Angeles and due to the amount that he works and travels, he doesn't consider himself settled down in either home.

Thankfully, he did find time to make it to the 2019 MTV Movie & TV Awards since he deserves to bask in the recognition of his show. As he has shared in multiple interviews, Levy has striven to portray a realistic LGBTQ couple on TV with no room for homophobia or other bigotry.

He told the Los Angeles Times in 2018 that on TV, LGBTQ relationships are historically treated differently than straight relationships. "You don't see the same kind of sexuality, intimacy, kissing, because it's been considered taboo or headline-grabbing for so long. I love that we've been able to just tell a relationship as it is, as it exists, for me, for my friends, for people I know, for people out in the world, that doesn't come with a lesson to be learned. It's just two people loving each other."

Levy told Out that he wanted Patrick and David's engagement to "feel real and reflect, in a way, feelings that I had experienced." So perhaps he has had a boyfriend recently. But no matter his real-life relationship status, the world has Levy to thank for the swoon-worthy love story of David and Patrick.

And if Levy does enter a serious relationship, it's up to him if he wants to share it with the media or publicly on social media. But he just may since, as Levy said in his acceptance speech at the Canadian Screen Awards in March, "Wouldn't we all be happier if we were able to love out loud?"