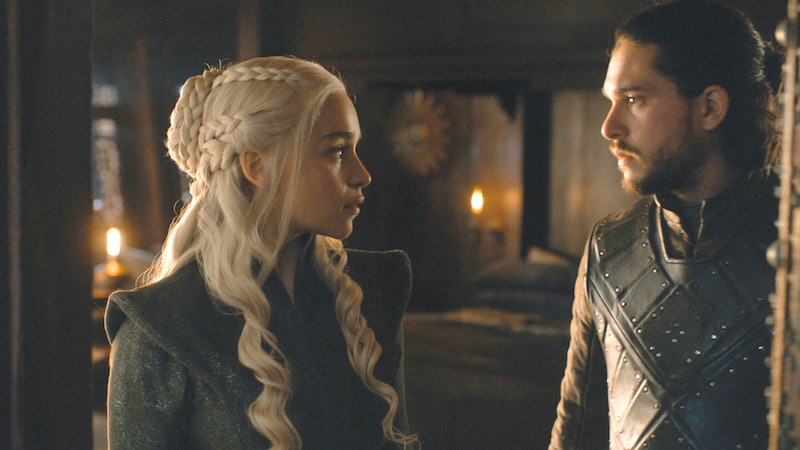 Early on in Game Of Thrones, even before he joined the Night's Watch and took a vow of celibacy, Jon Snow chose to stay a virgin so he wouldn't accidentally father a bastard child. Spoilers for the Season 7 finale follow. But the King in the North has come a long way in the name of love since then with not only Ygritte but by having sex with Daenerys during the Game Of Thrones Season 7 finale. And while he may have worried about fathering a child before, he threw caution to the wind with the Mother of Dragons in "The Dragon And The Wolf." Because as even Jon said, maybe Daenerys shouldn't think she can't have children based only on the words of the witch Mirri Maz Duur. That, plus all of the baby talk happening in the episodes leading up to Aunt Daenerys and her nephew Jon getting it on, leaves no doubt in many fans' minds that Daenerys will become pregnant on Game Of Thrones with her nephew's son, unintentionally ensuring that the Targaryen dynasty continues.

Although Daenerys has allegedly not been able to have any children after her son Rhaego was stillborn and her three dragons were hatched in Season 1, her fertility has never been such a prominent discussion point — that is, until Season 7. Sure, she had sex with Daario Naharis — presumably unprotected — many times without ever conceiving, so it's understandable that she had continued to believe she couldn't have children. Yet, Daenerys doesn't know about her connection to Jon beyond that she's radically attracted to him. And if something as seemingly unbelievable as Jon being the son of Daenerys' brother Rhaegar can occur, why shouldn't she be able to have a child by that very same secret Targaryen? After all, Jon has come back from the dead, so crazier things have happened.

The show's focus on Daenerys' fertility just as she was falling for Jon can be no coincidence. And while Dany having a child with someone she loves should make her happy, there will be an absurd amount of complications to come if their sex does result in a baby. That would be true even if they weren't aunt and nephew since Jon and Daenerys are supposed to be allies in a war and mixing business with pleasure is never a great idea. But, as the showrunners have shown by having Bran narrate the sex scene with Jon's family history, there's no way you can enjoy this budding love story without considering that they are related. So any potential child they create will be a product of incest, which I'm just going to go out on a limb and say will disturb the two lovebirds — even though they are Targaryens, who have notoriously always participated in incest.

Because of their unknowingly complicated relationship, Daenerys ending up pregnant from their tryst would just epitomize the storytelling of Game Of Thrones. The series has always excelled at leaving fans conflicted about who and what to root for. Dany having a child and continuing her lineage is good, but it's not so good that she didn't know her real relationship to Jon Snow before they had sex. Plus, their baby would add a whole other dynamic to the plot of Game Of Thrones when you consider the Azor Ahai prophecy of the Prince That Was Promised.

Jon and Daenerys — the combination (or "song," if you will) of ice and fire — are the key to defeating the Night King and their child could either be Azor Ahai or lead to one of them becoming Azor Ahai. So in that way, it was kind of super important that they had sex before they found out they were aunt and uncle. Probably neither of them would have gone through with consummating their relationship if they had known beforehand and now that the damage is done, and if Dany does indeed become pregnant, then their child can help fulfill a major prophecy. Add to that Jon's struggle if he finds out he's related to Dany but also that she's pregnant: Will he choose to leave the child a bastard or marry her anyway? It's the kind of complicated the GoT writers love.

So while the Season 7 finale made it seem like Cersei is most definitely faking her pregnancy, Daenerys becoming actually pregnant by Jon seems almost inevitable.