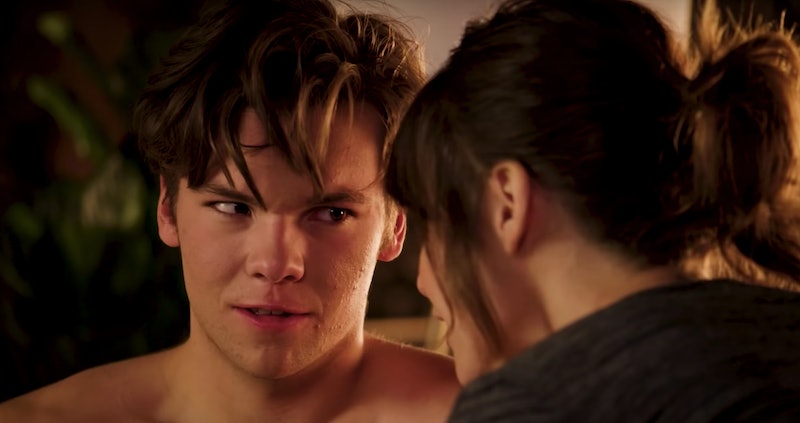 After a thriller-filled "Shocktober" including A Working Mom's Nightmare, Smuggling in Suburbia, Sinister Seduction, Erasing His Dark Past, Psycho BFF, Sleeping With My Student, and Kindred Spirits, Lifetime will air its grand finale, Designed to Kill, on Oct. 25 — just in time to close out the month before Halloween. Judging by its wonderfully absurd plot (more on that soon), the movie is pretty obviously not based on a true story, even though the network does love a juicy ripped from the headlines feature. They literally have a whole programming slate dedicated to them.

However, Designed to Kill does follow another favorite theme for the channel: a murderous, obsessive power dynamic between its two main characters. In the past, Lifetime has aired movies about nannies becoming fixated on the kids they're watching, moms and their sons' best friends, and aunts White Single Femaling their nieces. But this time, it's a photography teacher's illicit obsession with her nerdy student turned model that goes too far.

According to its official description, Designed to Kill stars Days of Our Lives actress Linsey Godfrey, who plays the obsessive Ms. Jennifer Higgins, and Joshua Hoffman, who plays her student David. After Ms. Higgins gives Joshua a makeover and lands him the cover of a magazine, he starts to get a lot of new attention at school, and Ms. Higgins grows increasingly jealous. Knowing Lifetime, that will inevitably lead her to take things too far as she does her best to get the other people in Joshua's life out of the way. Think a gender-flipped She's All That, but way, way darker.

With a little sleuthing, you may actually be able to figure out the ending before the movie premieres, since it's actually already been released. Johnson Production Group produced the film in 2018 and shared a very intense full-length trailer for it under a different title, Fatal Fashion, that year. On IMDb, the film is also referred to as Deadly Runway. It was initially released on Netflix as Fatal Fashion, and Godfrey promoted it on Instagram. "I did a movie last December called Fatal Fashion," she wrote. "I play Jennifer, a fashion photographer turned teacher who becomes obsessed with her student. Check it out on @netflix."

On Oct. 3, she promoted its Lifetime revival on Twitter. "I did a movie!" she wrote. "It's airing again this month. It's a lot of fun and perfect for Halloween, what with the obsession and murder. Check it out!"

The movie did receive some criticism for corny acting and "incoherent flashbacks," particularly from members of the "How did this get made?" subreddit. However, given its run on multiple platforms, it's clear that many have enjoyed watching; clearly, those people don't get that the point of Lifetime movies is to be over-the-top. If you fall into the latter camp, Designed to Kill (or as it's called on Netflix, Fatal Fashion) is still available to stream on the site now, so you can watch it again (and again) before spooky season comes to an end.

More like this
Netflix Shut Down 'Bridgerton' S3 Rumours About A “Very Dark” Storyline
By Bustle
Rupert Grint Just Shared A *Major* Update About Ron Weasley’s Future
By El Hunt
At 28, Rosie Perez Risked Her Career To Stop Playing Stereotypes
By Gabrielle Bondi
'Abbott Elementary' Fans Probably Missed This 'Parent Trap' Easter Egg
By Sam Ramsden
Get Even More From Bustle — Sign Up For The Newsletter
From hair trends to relationship advice, our daily newsletter has everything you need to sound like a person who’s on TikTok, even if you aren’t.