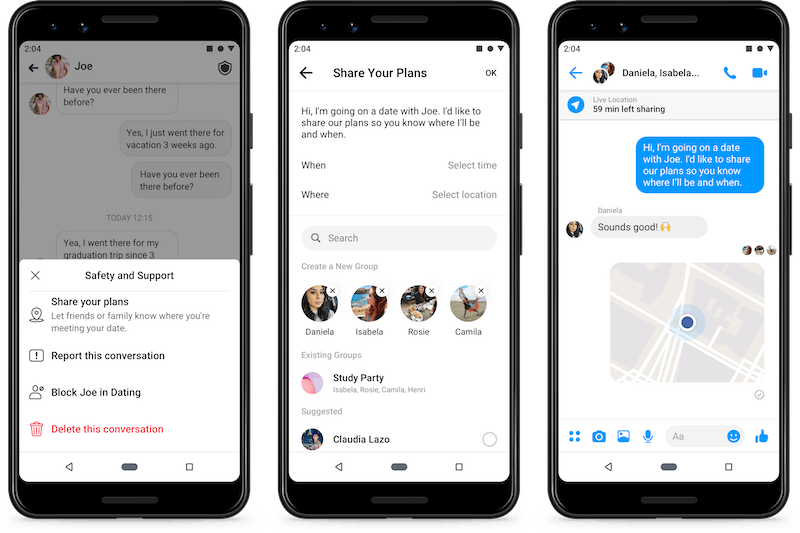 Well, it finally happened: Facebook has entered the online dating sphere. Although Facebook Dating began rolling out in numerous countries just about a year ago, it only just launched in the United States, going live on Sept. 5. If you’re into the online dating scene, you’re undoubtedly wondering whether Facebook Dating is safe — which is absolutely an essential topic to consider before deciding to use the service or not. When it comes down to it, the bottom line is that Facebook Dating is about as safe as any other kind of online dating: There are always risks, and generally we’ve got to be realistic about what we can and can’t control and act accordingly; however, the system does come with some features in place to help mitigate some of those risks.

You also have a high degree of control over both what’s in your Dating profile and which elements of your profile get shown to other users. According to a press release on Facebook Dating’s safety and privacy tools provided to Bustle, the only thing that will come with you from your regular Facebook profile to your Facebook Dating profile (and again, only if you choose to create a Facebook Dating profile in the first place) is your first name and age; you choose whether any other information makes its way from one profile to the other. Additionally, you’re also in control of how you appear to other users: Per the press release, “whether you provide different information than you have on your Facebook profile, and if you share details such as your hometown, religion, occupation, and more within Dating” are entirely up to you.

One of the other safety-related perks of Facebook Dating is that you can choose specifically to be matched with friends of your Facebook friends — meaning you can vet people with whom the service matches you with people who already know them. Of course, that’s not necessarily a complete fail-safe; there’s only so much anyone can really know about anyone else, and to use one of the most serious examples, abusers are often really good at keeping their abusive actions hidden from other people. However, this feature of Facebook Dating does provide an additional way to check up on the people you’re matched with — if you’re matched with a friend of someone you trust and ask about them, you can take their opinion into consideration before you decide to message or meet up with your match.

If you do decide to meet up with someone you match with on Facebook Dating, you can also use the “Share Your Plans” feature to let a trusted friend know the details of our date. Basically, this feature is just a high-tech version of the oft-repeated dating advice to let someone you trust know where you’re going, when, and with whom when you’re seeing someone you’re still getting to know; the idea is for someone to be able to check on you in the event that something goes south. The difference here, though, is that “Share Your Plans” lets you share your exact location live you can share your exact location live — so, your safety buddy won’t just know where you are because you told them; they’ll actually be able to see where you are—and if you’re still where you told them you’d be.

Lastly, there are block features built into Facebook Dating. In the privacy settings section of Dating, tapping on “Block people in Dating” will allow you to build a list of anyone you don’t want to have access to you or your profile within Dating. Anyone you’ve blocked won’t be able to see your Dating profile or send you messages; they also won’t be suggested to you as potential matches. (Note, though, that putting someone on your Dating block list doesn’t affect interactions on the rest of Facebook.) Additionally, photos, links, payments, or videos can’t be sent in Facebook Dating messages — which means that no one will have to contend with unsolicited dick pics, among other things. And honestly, anything that cuts down on the number of unsolicited dick pics ambushing unsuspecting people is a good thing.

Again, though, it’s always worth exercising other common-sense safety measures — and remembering that there’s only so much we can control. As Cassie Werber pointed out at Quartz in 2017, statistics on how safe or dangerous online dating is aren’t readily available; the unfortunate reality is, though, that even though online dating is commonplace these days and can often lead to successful and healthy relationships, there’s still a certain amount of risk involved. It’s very easy to create a fake online dating profile, for example — and it’s easy to create a fake Facebook profile, as well. That means that creating a fake Facebook Dating profile probably won’t be all that difficult.

So, even if Facebook Dating’s goal is to be as safe and secure as possible, you’ll still want to stack the decks in your favor, safety-wise: Don’t reveal too much about yourself right off the bat; Google both yourself (so you know what your potential matches can find out about you) and your matches (so you can verify they’re who they say they are) before meeting up; when you’re just getting to know someone, make plans to meet up in public places, make sure you have your own transportation lined up, and tell someone you trust where you’re going, when, and with who. You can check out more online dating safety tips here.

More like this
Ashamed Of Your Screen Time Stats? Here's How To Change That
By Alexis Morillo
11 Super Bowl Instagram Captions To Use On Game Day — Even If You Don’t Like Sports
By Alexis Morillo
How To Turn Off TikTok Profile Views So You Can Stalk Other Accounts In Secret
By Alexis Morillo
Learning To Love, Not Judge, The Lunchbox Wives Of TikTok
By Esther Zuckerman
Get Even More From Bustle — Sign Up For The Newsletter
From hair trends to relationship advice, our daily newsletter has everything you need to sound like a person who’s on TikTok, even if you aren’t.