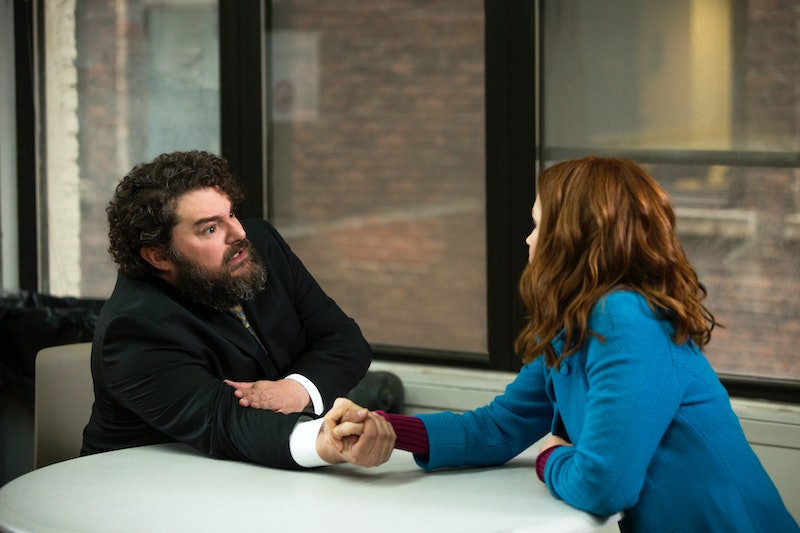 Spoilers for Unbreakable Kimmy Schmidt Season 4 Part 1 ahead. Kimmy Schmidt is no stranger to terrible men, and, in fact, spent 15 years locked in an underground bunker having to deal with Reverend Richard Wayne Gary Wayne aka DJ Slizzard (Jon Hamm), one of the worst men to ever live. However, Season 4 of Unbreakable Kimmy Schmidt puts Kimmy face-to-face with a new breed of terrible man in the form of Fran Dodd (Bobby Moynihan), one of DJ Slizzard's biggest fans. But is Fran Dodd based on a real person? While he seems like a comical exaggeration, there are people with similarly extreme beliefs about how gender does and should function in America.

If you've never heard of Male Right's Activists (lucky you), then Fran Dodd may seem like an absurd caricature. He espouses some of the most misogynistic thoughts in the show's history, claiming that the world was better when women weren't allowed to make decisions and spending his time working as C-E-Bro of The Innocence Broject, a bastardized take on t The Innocence Project — attempting to prove that people like Bill Cosby, Harvey Weinstein, and Lord Voldemort are being wrongly persecuted by the world. While Fran Dodd is appropriately ridiculous to fit the tone of the show, the ideologies that he champions aren't far off from the talking points from some popular internet communities. There's no evidence that he's based on any one man in particular, but he does appear to be representative of some of the most toxic men in the world.

If he existed in real life, Fran Dodd would likely belong to a informal community referred to as "The Manosphere". That term describes spaces — mostly online — that are dedicated to "male issues," often attempting to argue that men's problems in the modern era are a result of the rise of feminism. The communities within the Manosphere range from Reddit's infamous and misogynist "Red Pill" community to the Incel community to the Men Going Their Own Way Movement, a group so interested in "self-ownership" that they refuse to enter any type of relationship with a woman. While Fran Dodd doesn't specifically name-drop any of these groups, it's easy to believe that he's spent several hours on some of the darkest corners of the internet, taking in and repeating the misogynist language that brings him comfort.

While the show doesn't spend much time on why Fran Dodd is expressing radically misogynistic beliefs, it's clear what attracted him to these circles. And it's likely the same reason that many other men seek to blame their problems on a society that is becoming more equal. It's no accident that alongside DJ Slizzard, one of Dodd's other heroes is Donald Trump and his goal of "Making America Great Again," which, in practice, takes the form of stripping freedoms from marginalized people. The intentions of the Manosphere are often associated with the "alt-right," as both groups seem to have the ultimate goal of keeping patriarchal institutions in tact.

Trump's actions and words set an example for men like Dodd, who seems to be unhappy in his life. He lives with his mother, and has been an assistant salesperson for a bridal shop for years with seemingly no chance of becoming a lead salesperson. His life isn't great, and Trump's alt-right supporters and the Manosphere promise that there will come a day where men have all the power, and that women will "just do what they're told." In fact, Fran Dodd's unhappiness makes him an ideal mark, as The Outline reports that alt-right members are targeting people with depression to recruit them to their political ideology.

It's scary stuff — but then again, the premise of Kimmy Schmidt is defined by themes of kidnapping and imprisonment. The show bravely pokes fun of unpleasant subjects, and the narcissistic ideologies of The Manosphere are a worthy target for Kimmy Schmidt's comedic sights. Dodd pops up a few times throughout Part 1 of The Unbreakable Kimmy Schmidt Season 4, and chances are we'll see more of him — or people who share his beliefs — in Part 2 of this season, as the series takes well-deserved shots at the groups that inspired the character.