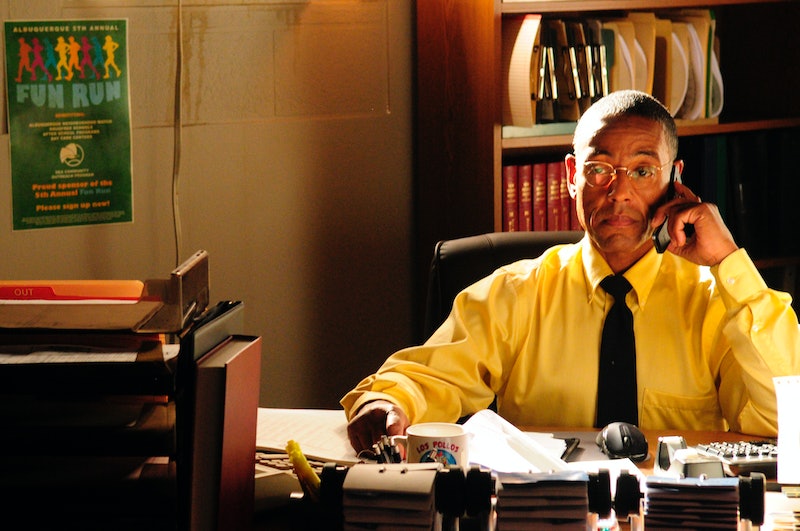 Even though Walter White killed him back in Season 4, Gus Fring's presence loomed large in the final season of Breaking Bad. The next chapter of the saga continues with the Breaking Bad sequel movie, but Gus being in El Camino doesn't seem very likely. While he was certainly a hot topic in Breaking Bad Season 5, Giancarlo Esposito didn't reprise his iconic role back when it aired in 2013. With El Camino focusing on Aaron Paul's Jesse, Gustavo Fring's return isn't vital to the story. But if you need your Gus fix, you always have that other Breaking Bad spinoff, Better Call Saul.

Ahead of its premiere on Oct. 11, director and writer Vince Gilligan was keeping the cast list of El Camino as secretive as possible. Yet, The Hollywood Reporter noted that more than 10 characters from Breaking Bad will be a part of the follow-up story. The only ones who were confirmed were Paul's Jesse Pinkman, Charles Baker's Skinny Pete, Matt Jones' Badger, Larry Hankin's Old Joe, and Jonathan Banks' Mike Ehrmantraut. Since Mike was killed in Breaking Bad, that leaves the possibility of other characters coming back from the dead via flashback.

No fan would ever reject an appearance from the Los Pollos Hermanos entrepreneur in anything Breaking Bad-related, but Gus seems unlikely to be one of those dead character cameos. Then again, Gilligan does like to surprise his fans.

Esposito was at the El Camino premiere in Los Angeles, but that's not much of a clue since most of the Breaking Bad family, including Bryan Cranston and Krysten Ritter, were in attendance. Deceased characters like Cranston's Walter White and Ritter's Jane Margolis are top contenders to make an appearance in El Camino based on how important they were in Jesse's life. But the same can't really be said for Esposito's Gustavo Fring. Jesse was employed by the drug boss and fast food restaurateur for a bit. But when specifically thinking about how El Camino needs to wrap up Jesse's story, Gus returning doesn't feel particularly necessary.

All thing's considered, Jesse and Gus had a fairly decent relationship on Breaking Bad with Gus valuing Jesse's skills and offering him to be his full-time cook. But Walt turned Jesse against Gus by framing the Chicken Man. Even when Jesse realized Gus hadn't poisoned Brock, he had come around to Walt's thinking that Gus had to die. And while Jesse spent most of the final season dealing with the consequences of Gus' fallen drug empire, Gus and Jesse's relationship didn't have any real loose ends.

As for Esposito, he hasn't indicated if he will be in El Camino. But the actor has kept plenty busy since Breaking Bad and he's currently in the Epix show Godfather of Harlem. He also has reprised his role of Gus in the Breaking Bad prequel series Better Call Saul where he's been a regular since Season 3. The anticipation for Gus' return was so major that co-creators Gilligan and Peter Gould confirmed to Vanity Fair that they built in an Easter Egg announcement in the Better Call Saul Season 2 episode titles. (An anagram using the first letter of each episode spelled out "Frings' back.")

If the fan-favorite character does return for El Camino, Gilligan is sure to use Gus in a thoughtful way that drives the story (and not some simple crowd-pleasing shoutout) since the creator has consistently maintained the integrity of his saga. But with his face blown off by Hector Salamanca in Season 4 of Breaking Bad and the sequel centered on Jesse after the Aryan Brotherhood massacre, Gus probably won't be in El Camino. (You're more likely to see Gus' murdered protégé Gale Boetticher since Jesse regretted killing him.) But at least the Chicken Man gets to live on in Better Call Saul where his meth empire has just started really cooking.

More like this
'The Sandman’s Ending Is A Departure From Neil Gaiman’s Comic Book Series
By Kadin Burnett
What’s New On Netflix: 'Never Have I Ever' & 'Indian Matchmaking' Return
By Arya Roshanian
What’s New On Netflix: 'Bridget Jones’s Diary' & 'Monster-in-Law'
By Arya Roshanian
Here’s Everything Coming To & Leaving Netflix In August
By Jake Viswanath
Get Even More From Bustle — Sign Up For The Newsletter