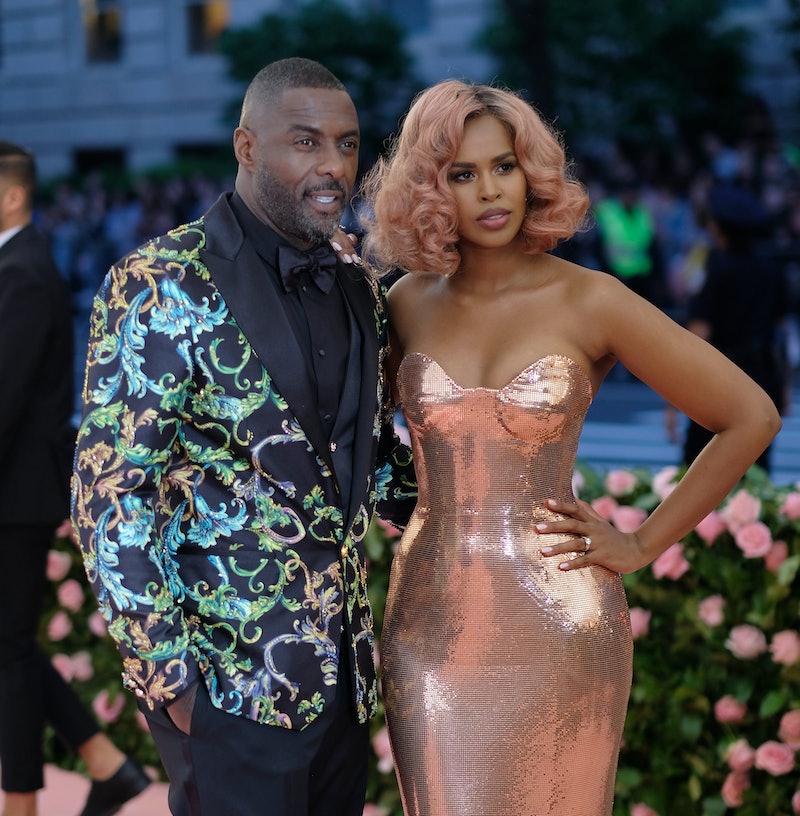 Keeping your private life private can be hard when you're as famous as Idris Elba. While he may try keeping some details to himself, fans just have so many questions. But for anyone wondering if Idris Elba is still single, the actor would happily answer that he's off the market. The actor married model Sabrina Dhowre in Marrakesh, Morocco in April 2019. Currently, he's busy promoting his new film Fast and Furious Presents: Hobbs & Shaw, which releases in theaters Aug. 2, but he's also taken time recently to open up about wedded bliss.

While Elba's Instagram hardly details his love life, his wife Dhowre's Instagram is overflowing with Elba and captures the two attending carpets and embracing in photos from their wedding. To briefly recap their love story, Elba met Dhowre in 2017 while filming The Mountain Between Us, according to an interview with Refinery29 in September of that year. The couple made their first public appearance on the carpet for Molly's Game that same month, People reported. Since then, they've appeared on several other red carpets together. Tying in their movies-themed connection, in February 2018, Elba asked Dhowre to marry him by getting down on one knee at a screening of his directorial debut, Yardie.

While this is Dhowre's first marriage, this makes three for Elba, who was married to Hanne "Kim" Norgaard in 1999 until 2003. He then tied the knot with Sonya Nicole Hamlin in 2006, but the marriage ended that same year, according to Daily Mail. Elba and Norgaard share a 17-year-old daughter Isan, who was the Golden Globe Ambassador in 2019. Elba also has a 5-year-old son, Winston, who he welcomed in April 2014 with ex-girlfriend, Naiyana Garth, according to People.

Since his other marriages didn't quite work out, Elba was unsure if he'd wed again, which he explained in an interview with British Vogue in June 2019, that featured him and Dhowre on the cover. “You know, I’m 47 this year, been married and lived a full life before I even met Sabrina,” he revealed to the magazine. “It wasn’t something that I wanted to do, get married again. But…”

Although he had some hesitations in the past, Elba appears to have no regrets about marrying again. In July 2019, he sat down with The View and spoke about the positive impact Dhowre has on him. He shared, "I have been married before, and I famously said I wouldn't get married again. But, I just met someone that just opened me up. And I'm actually the happiest I've been in a long time." He went on to confirm that it was love at first sight.

Before his wedding with Dhowre, Elba was named People's Sexiest Man Alive in November 2018. But, in an interview on The Late Show with Stephen Colbert in July 2019, Elba explained the responsibility of the title is "to be sexy and do sexy things." He then went on to describe the ways in which he has fulfilled his duties. "I got married this year, to my beautiful wife, and that was considered a sexy thing to do."

In the same interview, Elba also talked about Cats, which premieres in December. And even though he's off the market, that hasn't stopped fans from admiring him in magazines or films — or even in cat form. When the Cats trailer dropped, fans meowed over Elba's appearance, and even the actor expressed excitement about the world getting to see his "naughty cat" role.

So while Cats doesn't come out until later this year, Elba surely won't disappear from the spotlight. He and Dhowre have a long life ahead of them, which means plenty more adorable moments —and red carpets — to come.

More like this
Kumail Nanjiani & Emily V. Gordon’s Relationship Timeline Is Literally A Movie
By Jake Viswanath
Olivia Wilde & Harry Styles Are Reportedly "Taking A Break" After Almost 2 Years
By Jake Viswanath and Radhika Menon
Scarlette Douglas Had A Special Person Waiting For Her At The End Of The Bridge
By Darshita Goyal
Robert Downey Jr.’s New Film Is A Tender Story of Fatherhood & Forgiveness
By El Hunt
Get Even More From Bustle — Sign Up For The Newsletter