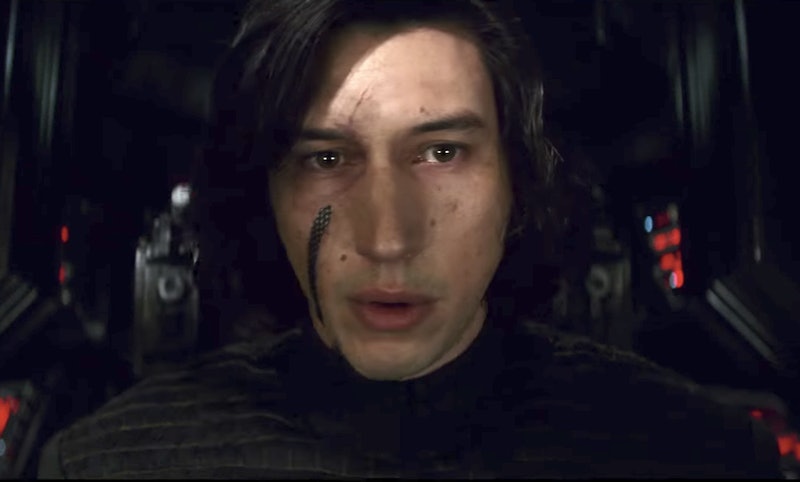 One of the most significant audience takeaways from Star Wars: The Last Jedi is the glow-up of Kylo Ren. The villain formerly known as Ben Solo emerged from the ashes of The Force Awakens as a newly conscientious, conflicted, and scarred man, marked emotionally and physically by murdering his father. But is it OK to be attracted to Kylo Ren? He's six-foot-infinity-inches tall, broad-shouldered, a sentient smolder. He rocks those all-black getups and drives a sweet ride. He's as tormented as he is torturous, and actor Adam Driver's powerful brand of handsome only adds to Kylo's flair. Mild spoilers ahead for The Last Jedi.

If Kylo Ren existed IRL, he'd ride a motorcycle, terrify your parents, and you'd hopefully stay a galaxy away from him on account of his murdering his father in cold blood. Without Emperor Snoke pulling the strings, Kylo emerges as Star Wars' chief villain. If it feels weird to have a big ol' crush on The Guy Formerly Known As Jedi Knight Trainee Ben Solo, that's probably a good thing — it should. Pop psychology suggests that people love a challenge, though, and Kylo Ren is the ultimate fixer-upper: He has a solid foundation, and you know just what to do with the rest of it.

The difference between the Kylo Rens of The Force Awakens and The Last Jedi is as simple as this: the helmet. For the majority of the first film, Driver's striking visage was hidden beneath a mask designed to resemble that of Kylo's grandfather, Darth Vader. In the first act of The Last Jedi, he removes it, determined to prove to Snoke (and himself) that he's not just playing bad boy dress-up. The mask removal here is key. For the duration of the film, Kylo is forced to grapple with his identity — and audiences get to watch Driver do it.

Drink it in, folks: Tall, dark, and glowering, Kylo's got all the hallmarks of your best worst crush. He's conflicted. He's scared. That connection with Rey — could anything be sexier? Seriously, Driver's charged moments with actor Daisy Ridley are intense. The lingering hand! Also, since Rey's history is unknown, fans are unsure whether to root for a romantic connection between the two. But hey, Leia kissed Luke, right? Speaking of Leia, Kylo Ren is her son with Han Solo. "Ben Solo" was basically grandfathered into being deeply attractive.

Putting aside Driver's natural hunkiness, his hulking mass, and Kylo's curiously alluring scar, let's take a look at some basic facts about this character. Kylo Ren is a mass murderer. In the last film, he committed patricide. He's unpredictable, untrustworthy, and full of rage, along with having a dangerously high self-opinion. Sure, he's swarthy and craggy, and you just want to kiss his big dumb face, but he's not a good guy. He's unstable, a liar, the franchise's current antagonist. Oh, and he killed Han Solo. How could you love the man who murdered Han Solo, when there are so many other people in the galaxy worthy of your desire?

Because he's conflicted about it, of course. He hasn't given himself over to the Dark Side completely. In fact, The Last Jedi hints that Rey may be able to pull him over to the light. She called him a monster, and it wounded him. He's vulnerable. But would you want Kylo Ren to be "good"? Would he still be as attractive to you if he were "happy"? Can you un-know that he killed his dad, destroyed Luke's Jedi training academy, tries to manipulate Rey and generally seems motivated by revenge, even though he has never been wronged, per se? It's worth it to weigh these things before deciding to board the Kylo Ren train.

To audiences, a love of the redeemable bad boy is all too familiar: Consider the cases of Draco Malfoy, James Dean, any outcast leader in any text ever. "I can change him, I can fix him, he'll be good for me" is a cliché, but it's only a cliché because it's so common. Kylo Ren is a walking dare. You think your love will save him, or Rey's will, or Leia's. Someone's. Anyone's. The hope that he's not all bad, just drawn that way, stokes the fires of attraction. That is OK — as long as it's there. And remember: Ben "Kylo Ren" Solo is fictional, but Adam Driver is extremely real. When the pang of guilt returns, it helps to fixate on that.

More like this
Yes, You Do Know The Song From The 'Black Panther: Wakanda Forever' Trailer
By El Hunt
Everything You Need To Know About ‘Black Panther: Wakanda Forever’
By Bustle Editors and Radhika Menon
What’s New On Netflix: 'Never Have I Ever' & 'Indian Matchmaking' Return
By Arya Roshanian
At 14, Rachel Sennott Had A Sexual Awakening While Reading 'Twilight'
By Samantha Leach
Get Even More From Bustle — Sign Up For The Newsletter