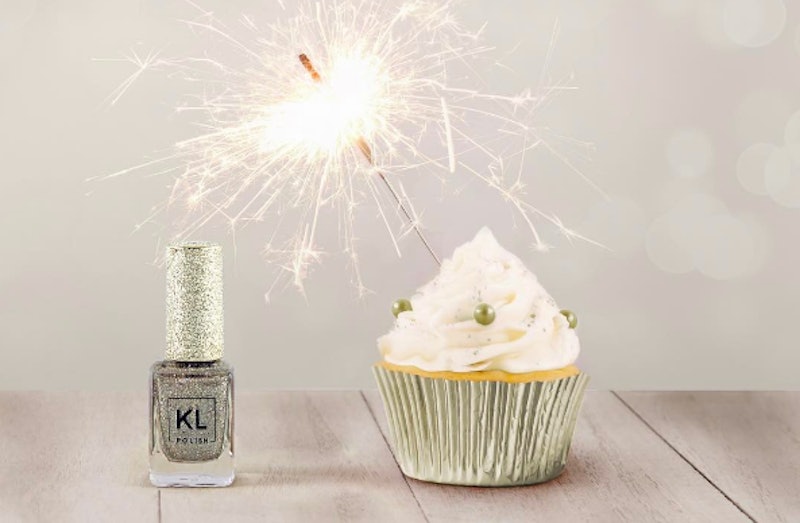 Remember the new KL Polish shade that Kathleen Fuentes, aka KathleenLights, announced on her birthday? Well, all the details are finally here. The launch of the glittery shade isn't far away, and there are a few things you should know before it comes out. The most important is that Das Esspensive will be limited edition. Mark those calendars and get your wallets ready, because something tells me that this polish won't be around for long.

I've put an embarrassing amount of time and effort into finding the perfect glitter polish, and it looks like my search is over. Fuentes finally showed finger swatches of her latest KL Polish called Das Esspensive. It's an opaque, all over silver glitter that is absolutely gorgeous. Unfortunately, this won't be an official part of the KL Polish collection. That means you should probably be sitting by your computer on Feb. 13 at 11 a.m. ET.

There's no word yet on whether you'll be able to buy more than one yet. If you can, you should probably stock up. A glitter shade like this doesn't come around very often. Considering that the pre-sale and the first round of nail polishes sold out in just a day, I have no doubt that this one will sell out just as fast.

Despite its name, Das Esspensive will be the same price as all the other KL Polishes, according to Fuentes' tweet. That's a whole lot of sparkle for just $8.50. The finger swatch shown above is two coats of the polish, which is pretty incredible, IMO.

The packaging of the limited edition shade is also a little different. Instead of having a black cap, Das Esspensive has a sparkly handle to match the color inside. So it will look just as great on your nails as it will sitting on your makeup table.

Fingers crossed that Fuentes changes her mind and makes Das Esspensive a part of her permanent collection. Just to be safe, you should probably be ready with you credit card in hand on launch day.