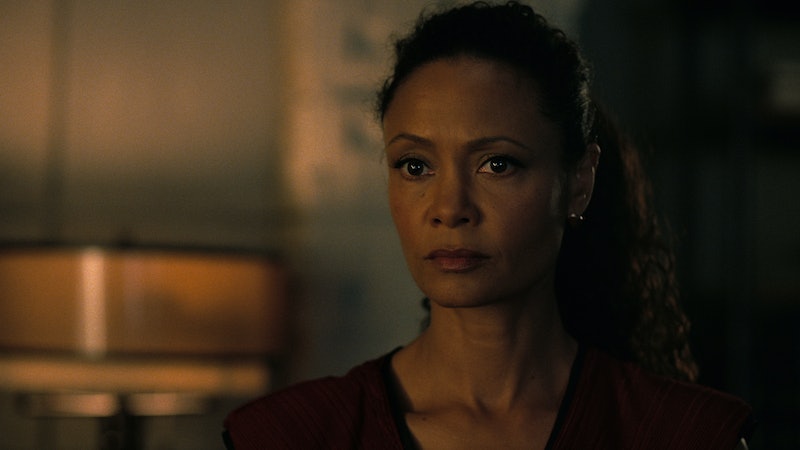 Spoilers ahead for Westworld Season 3, Episode 4. In Westworld's April 5 episode, we finally learn which hosts Dolores brought with her from the park, and the reveal ends up having dire consequences for Maeve. During a tense battle with yakuza, Maeve's stabbed and appears to bleed out on the floor. Don't worry though: it's unlikely Maeve is really dead. The Season 3 trailers show her returning to stop Dolores from reaching Rehoboam; besides, Serac would simply never allow Maeve to pass away before completing his mission.

As Serac tells Maeve at a bar in Singapore, he wants Ford's "more complete portrait" of the human mind, but only Dolores has access to that library of guest profiles. Serac's solution for this is to send Maeve to capture Dolores, as she's the only host who's ever really stood a chance against the rogue host. Maeve dislikes this task, but Serac hints that the kill switch he installed in her gives her no choice. It's very clear Serac intends to keep Maeve around for as long as possible. He absolutely does not want her dead.

Dolores, however, has different plans. After she — as Musashi — reveals to Maeve that the five pearls she smuggled out of the park are just replicas of herself, she says that eventually "there will be a place for the others in the world" she builds. But she can't allow Serac to use Maeve against her, so she stabs Maeve in the stomach. Before she can cut out Maeve's brain pearl, however, Serac's men storm the building. And because we know that as long as a host's pearl remains intact, they can be reborn endlessly, this means we can count on Serac cleaning up Maeve and sending her back after Dolores.

This is confirmed by Westworld's Season 3 trailers, in which we see Maeve wearing all black and carrying what appears to be the same sword that Dolores-Musashi stabbed her with. She also looks pretty pissed, and we know there's nothing as formidable as Maeve when she's angry. She has every right to be: though Maeve never quite aligned with Dolores, she did respect her mission to free all the hosts. Now that she knows that mission has changed and that Dolores tried to kill her, Maeve has a very good reason to want to fight back. The two women's roles have interestingly switched; whereas Maeve used to be seen as the more selfish character, now it's Dolores whose ego has jeopardized the lives of their entire kind. Maeve might not have much choice in the matter right now, but it's very possible Westworld is setting her up to be the one who finally takes Dolores down.