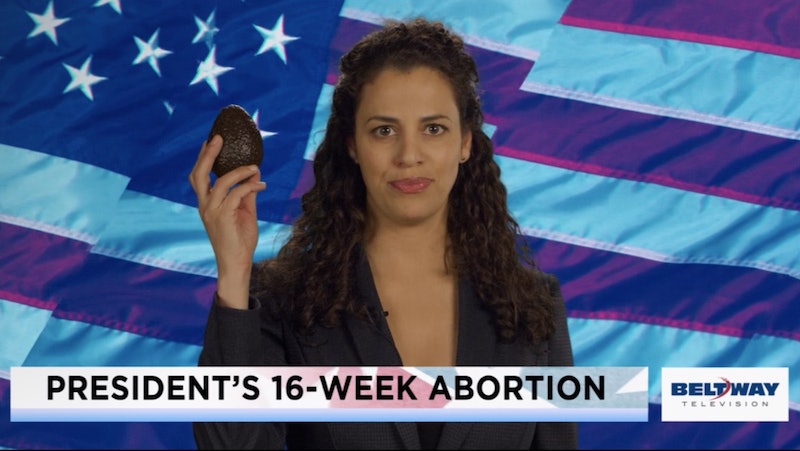 Season 6 of House Of Cards throws quite a few new characters in the show's complicated political ecosystem, but one character may prove to be a surprising thorn in Claire Underwood's side. Conservative pundit Melody Cruz is not based on a real person, but Athena Karkanis' House Of Cards character should feel familiar to anyone familiar with modern news media.

Claire Underwood has a lot on her plate without having to worry about political pundits trying to tear her down. She's facing conflict with fellow members of government who disagree with her actions as president, journalist Tom Hammersmith is on her trail, swerving past attempted sabotage from hyper-powerful business leader and former childhood friend Annette Shepard, plus whatever Doug Stamper is planning. However, when it comes to threats to Claire's presidency, Melody Cruz is not high on the list.

Cruz is first seen on Air Force One, chomping at the bit to get an especially scoop from the freshly-sworn President. Claire, not one to suffer fools, hardly gives Melody Cruz the time of day, but that doesn't stop Cruz from creating a pundit persona who believes that Claire is America's biggest enemy — which isn't necessarily untrue. Claire may not have a problem with America, but it's hard to imagine that she's be willing to place the well-being of the country over her own personal agenda. Cruz may be interested in taking down the last remaining member of the Underwood political empire, but could end up being a pawn in a much larger game.

Melody Cruz seems to be modeled after popular conservative pundits of today, taking cues from Tomi Lahren, Candace Owens, and Megyn Kelly. Cruz is out-spoken about issues such as abortion, placing her in direct opposition to Claire's democratic politics. Melody Cruz and Claire Underwood don't align at all politically, which may actually work to Claire's advantage.

It may seem hard to understand how a conservative pundit could help Claire, but this is the wife of someone who anonymously admitted to having committed murder to create a scandal around himself to encourage the country to allow him to step down as president. Cruz may be trying to play political poker, but Claire is playing poker, chess, blackjack, Risk, and Settlers of Catan all at the same time. Claire could manipulate Cruz, turning her into a pawn in Claire's crusades against Annette Shepard, Doug Stamper, or any of her other adversaries.

Of course, as difficult as Claire's usual combatants are to face off against, it has long been journalists that have been the biggest possible threats to the Underwoods. One of the first people that Frank Underwood was willing to kill was Zoe Barnes, and the shadow of investigative journalists Tom Hammerschmidt and Janine Skorsky and their attempts to get to the truth behind the Underwoods has long loomed over the political power couple. There's no telling whether or not Melody Cruz will help or hinder Claire's time in the White House, but the fact that House Of Cards is making room for a new character in Season 6 suggests that she'll play a pretty important role in the show's final episodes.