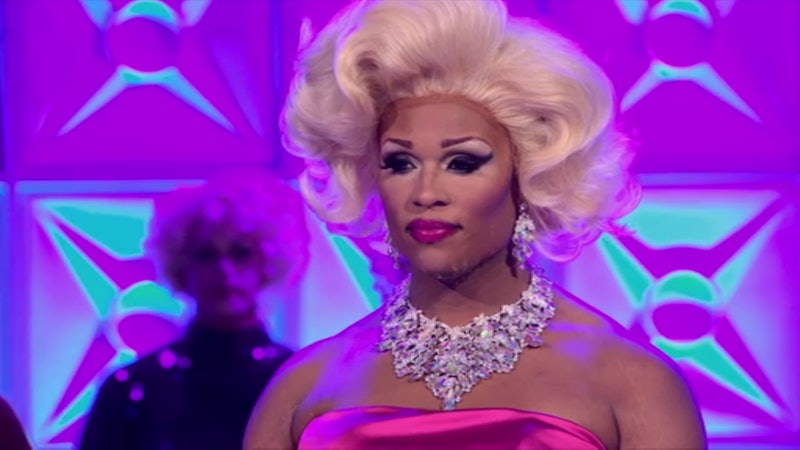 While the show has continually pushed TV boundaries since its inception, seeing Peppermint come out as transgender on RuPaul's Drag Race during Friday night's episode felt truly groundbreaking. Peppermint isn't the first trans contestant on RuPaul's Drag Race, yet the drag superstar's revelation still hit a unique, thoughtful, and powerful cord. Not only was Peppermint's disclosure about her identity inspiring to witness (so was the positive, supportive response from her fellow contestants), but her sentiment regarding the sometimes fraught intersections between the drag and trans communities was also important to address.

The revelation came during a group discussion about gender and the fluidity of gender expression, in which Peppermint stated, "It was actually through my drag that I realized my trans-ness," before proudly proclaiming, "I'm a transwoman." Following her comments, Peppermint stated that she "was afraid" of coming out to her fellow contestants, and spoke of the problems that can so often arise with her identity in both the trans and the drag community. She said,

That tension is what makes the drag superstar's revelation all the more powerful. While Peppermint is the first openly trans contestant to enter the competition, she isn't the first trans competitor featured on RuPaul's Drag Race. In Season 2 of the show, Sonique emotionally came out as transgender during the reunion special, while Monica Beverly Hillz announced she was trans in an episode of Season 5. Over the years, there have been other RuPaul's Drag Race contestants who have come out as trans after their appearances on the show, including Gia Gunn, Jiggly Caliente, Carmen Carrera, and Kenya Michael.

The triumph of Peppermint's reveal can't be understated. It was thrilling to see the drag queen occupying her space within the competition with pride, and battling through some clear anxiety to share her true identity with the rest of the contestants. In an interview with Entertainment Weekly, Peppermint shared the struggle for acceptance she's experienced as a trans woman in the drag community. She said,

"There was one very well known queen in New York who asked me if I was transitioning. She told me she supported me, but in the same breath told me I would be doomed to never work again in this job that I love so much. That scared me. There have been other people who’ve asked me, 'Wait a minute, are you trans or are you a drag queen? You need to tell me which one.' That was clearly a signal that people weren’t ready to accept me as both."

By bringing visibility to her trans identity, Peppermint is helping to provide representation to the trans community. Especially at such a critical time in U.S history for transgender rights.

In an interview with TV Guide earlier this year, Peppermint emphasized the importance of representation, and especially the hope it could bring the trans community if she were to win RuPaul's Drag Race. She said,

"I don't want to say [I was] going through an identity crisis when I was younger, but I really didn't see anybody like me. And that's not that unique for minorities: to not see someone reflected in television and media that represents who they feel they are. But I know that there's a lot of trans youngsters, queer or genderqueer youngsters, who are looking for someone to show them that they're not alone. So if you can look out and see yourself reflected in film and television, then you have a brighter future"

Peppermint may have found herself having to lip-sync for her life against Cynthia Lee Fontaine in Friday's episode, but her incredibly entertaining take on Madonna's "Music" proves that she definitely has what it takes to be America's Next Drag Superstar. And whether she manages to take that crown or not, Peppermint has managed to make some real herstory regardless.